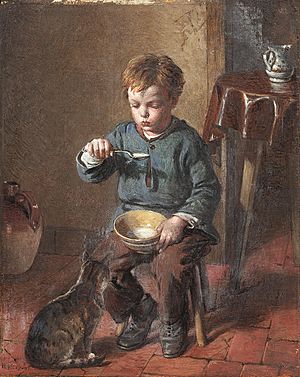 Porridge is a food which is made with a cereal, usually oats. The oats are boiled in water or milk, or both. It is usually served hot in a bowl or dish. Some people add things to their porridge such as sugar or syrup. In Scotland salt is often added.

Porridge is a traditional food in many countries in Northern Europe. It is usually eaten for breakfast. In some countries barley or other grains may be used. Porridge is cooked in saucepans or in a microwave. Traditionally, it was cooked in large metal kettles over hot coals. Porridge was often served as food for prisoners in prisons. This is why in English there is a slang expression "doing porridge" which means "being in prison". Porridge is also given to people who are ill because it is nourishing and easy to eat.

Semolina and gruel are foods which are quite similar to porridge. Semolina is usually served as a pudding. Gruel is a similar but thinner concoction to porridge. It is semi-liquid and usually drunk rather than eaten. Oliver Twist, in the famous book by Charles Dickens, was given gruel to eat.

Historically, heavy foods were eaten because most work was manual. Before the industrial revolution, men and women doing hard work needed more calories per day than they need today. At any rate this applies to countries which are highly mechanized. Porridge is a good example of the heavy calorie-laden food which has gradually gone out of favour.

All content from Kiddle encyclopedia articles (including the article images and facts) can be freely used under Attribution-ShareAlike license, unless stated otherwise. Cite this article:
Porridge Facts for Kids. Kiddle Encyclopedia.