Kids Encyclopedia Facts
Not to be confused with Atoll.
"Chuco" redirects here. For the genus of cichlid fish, see Chuco (genus).

Atole ( from Nahuatl ātōlli), also known as atolli and atol de elote, is a traditional hot corn- and masa-based beverage of Mesoamerican origin. Chocolate atole is known as champurrado or atole. It typically accompanies tamales, and is very popular during Day of the Dead (observed November 2nd) and Las Posadas (Christmas holiday season).

In Mexico, the drink typically includes masa (corn hominy flour), water, piloncillo (unrefined cane sugar), cinnamon, vanilla, and optional chocolate or fruit. The mixture is blended and heated before serving. Atole is made by toasting masa on a comal (griddle), then adding water that was boiled with cinnamon sticks. The resulting blends vary in texture, ranging from a porridge to a very thin, liquid consistency. Atole can also be prepared with rice, wheat, or oatmeal in place of masa. In northern Mexico, a variation is also made using pinole (sweetened toasted corn meal). Although atole is one of the traditional drinks of the Mexican holidays Day of the Dead and Las Posadas, it is very common during breakfast and dinnertime at any time of year. It is usually sold as street food. 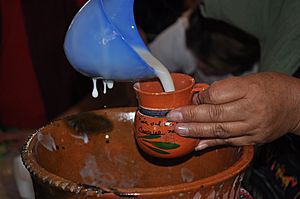 Atole served at the Atole Fair in Coacalco de Berriozábal, State of Mexico

In many parts of Mexico and in the United States in communities with Mexican cultural roots, atole is a traditional comfort food. It is often eaten as a breakfast or an after dinner snack on cold days. In New Mexico, blue corn atole is finely ground cornmeal toasted for cooking, consumed as a grainy porridge-style drink served warm, usually sweetened with sugar and/or thinned with milk. It is usually served at breakfast like cream of wheat or oatmeal. Elders are said to have drunk atole because it gave them energy and if a mother is nursing it gives her more milk. 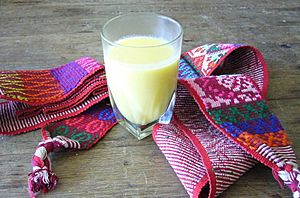 Salvadoran varieties include atol shuco ("dirty" atol, a reference to its darker color), particularly popular in the Cabañas region. The Nicaraguan homologue is pinolillo. In some parts of Honduras, fresh corn is ground and the expressed liquid is used as the base (instead of masa).

All content from Kiddle encyclopedia articles (including the article images and facts) can be freely used under Attribution-ShareAlike license, unless stated otherwise. Cite this article:
Atole Facts for Kids. Kiddle Encyclopedia.