Buckwheat seeds look like small beech tree seeds. Both seeds have three sides. Beech is also called buck, which is how buckwheat got its name.

Instead, buckwheat is related to sorrel, knotweed, and rhubarb. Buckwheat is referred to as a pseudocereal because its seeds are used in cooking the same as cereals, because they have complex carbohydrates.

The cultivation of buckwheat grain declined sharply in the 20th century with the adoption of nitrogen fertilizer which increased the productivity of other staples. 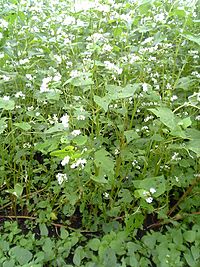 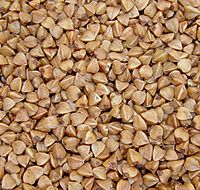 All content from Kiddle encyclopedia articles (including the article images and facts) can be freely used under Attribution-ShareAlike license, unless stated otherwise. Cite this article:
Buckwheat Facts for Kids. Kiddle Encyclopedia.