Rhubarb is a cultivated plant in the genus Rheum in the family Polygonaceae. It is a herbaceous perennial growing from short, thick rhizomes. Historically, different plants have been called "rhubarb" in English and used for two distinct purposes. The roots of some species were first used in medicine. Later, the fleshy, edible stalks (petioles) of other species and hybrids (culinary rhubarb) were cooked and used for food. The large, triangular leaves contain high levels of oxalic acid, making them inedible. The small flowers are grouped in large compound leafy greenish-white to rose-red inflorescences.

The precise origin of culinary rhubarb is unknown. The species Rheum rhabarbarum (syn. R. undulatum) and R. rhaponticum were grown in Europe before the 18th century and used for medicinal purposes. By the early 18th century, these two species and a possible hybrid of unknown origin, R. × hybridum, were grown as vegetable crops in England and Scandinavia. They readily hybridize, and culinary rhubarb was developed by selecting open-pollinated seed, so that its precise origin is almost impossible to determine. In appearance, culinary rhubarb varies continuously between R. rhaponticum and R. rhabarbarum. However, modern rhubarb cultivars are tetraploids with 2n = 44, in contrast to 2n=22 for the wild species.

Although rhubarb is a vegetable, it is often put to the same culinary uses as fruits. The leaf stalks can be used raw, when they have a crisp texture (similar to celery, although it is in a different family), but are most commonly cooked with sugar and used in pies, crumbles and other desserts. They have a strong, tart taste. 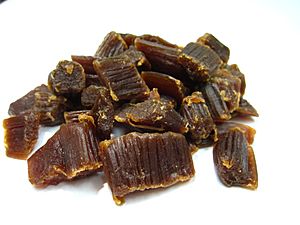 Rhubarb is grown primarily for its fleshy leafstalks, technically known as petioles. The use of rhubarb stalks as food is a relatively recent innovation. This usage was first recorded in 18th to 19th-century England after affordable sugar became more widely available.

Commonly, it is stewed with sugar or used in pies and desserts, but it can also be put into savoury dishes or pickled. Rhubarb can be dehydrated and infused with fruit juice. In the United States, it is usually infused with strawberry juice to mimic the there popular strawberry rhubarb pie. 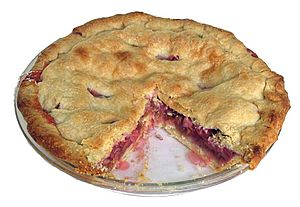 The species Rheum ribes has been eaten in the Islamic world since the 10th century.

In Northern Europe and North America the stalks are commonly cut into pieces and stewed with added sugar until soft. The resulting compote, sometimes thickened with corn starch, can then be used in pies, tarts and crumbles. Alternatively, greater quantities of sugar can be added with pectin to make jams. The most popular accompanying spice to use is ginger, although cinnamon and nutmeg are also popular additions.

In the United States the common usage of rhubarb in pies has led to it being nicknamed ‘pie plant’, by which it is referred to in many 19th century US cookbooks. Rhubarb in the US is also often paired with strawberries to make strawberry-rhubarb pie, though some rhubarb purists jokingly consider this "a rather unhappy marriage".

In the United Kingdom, as well as being used in the typical pies, tarts and crumbles, rhubarb compote is also combined with whipped cream and/or custard to make respectively rhubarb fool and rhubarb and custard.

In former days, a common and affordable sweet for children in parts of the United Kingdom and Sweden was a tender stick of rhubarb, dipped in sugar. It is still eaten this way in western Finland, Norway, Canada, Iceland, Lithuania, the Faroe Islands and Sweden, and also some other parts of the world.

Rhubarb can also be used to make alcoholic drinks, such as fruit wines or Finnish Rhubarb sima (mead). It is also used to make Kompot. Being a bit sour, it is very refreshing and can be drunk cold, especially during the summer.

All content from Kiddle encyclopedia articles (including the article images and facts) can be freely used under Attribution-ShareAlike license, unless stated otherwise. Cite this article:
Rhubarb Facts for Kids. Kiddle Encyclopedia.