A crumble is a dish that can be made in a sweet or savoury version, although the sweet version is much more common. A sweet variety usually contains stewed fruit topped with a crumbly mixture of fat (usually butter), flour, and sugar. A savoury version uses meat, vegetables and sauce for the filling, with cheese replacing sugar in the crumble mix. The crumble is baked in an oven until the topping is crisp. The dessert variety is often served with ice cream, cream, or custard. The savoury variety can be served with vegetables. 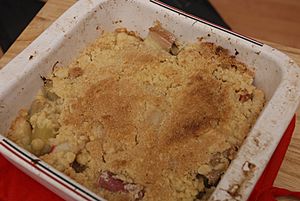 Popular fruits used in crumbles include apple, blackberry, peach, rhubarb, gooseberry, and plum. A combination of two or more of these fruits may be used. The topping may also include rolled oats, ground almonds or other nuts, and sometimes sour milk (e.g. vinegar and milk) is added to give the crumble a more extravagant taste. Brown sugar is often sprinkled over the crumble topping, which caramelises slightly when baked.

Crumbles became popular in Britain during World War II, when the topping was an economical alternative to pies due to shortages of pastry ingredients as the result of rationing. To further reduce the use of flour, fat and sugar, breadcrumbs or oatmeal could be added to the crumble mix. The dish was also popular due to its simplicity.sv:Paj#Smulpaj

All content from Kiddle encyclopedia articles (including the article images and facts) can be freely used under Attribution-ShareAlike license, unless stated otherwise. Cite this article:
Crumble Facts for Kids. Kiddle Encyclopedia.