A fool is an English dessert. Traditionally, fruit fool is made by folding pureed stewed fruit (classically gooseberries) into sweet custard. Modern fool recipes often skip the traditional custard and use whipped cream. Additionally, a flavouring agent such as rose water may be added.

Foole is first mentioned as a dessert in 1598, made of 'clouted creame' although the origins of gooseberry fool may date back to the 15th century. The earliest recipe for fruit fool dates to the mid 17th century. Why the word "fool" is used as the name of this fruit dessert is not clear. Several authors derive it from the French verb fouler meaning "to crush" or "to press" (in the context of pressing grapes for wine), but this derivation is dismissed by the Oxford English Dictionary as baseless and inconsistent with the early use of the word. The name trifle was also originally applied to the dish, with the two names being used interchangeably. 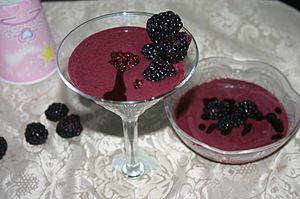 Originally, the most common fruit ingredient in fools was gooseberries, although other fruits and berries are known from early recipes, e.g., apples, strawberries, rhubarb and raspberries. Modern recipes may include any seasonal fruit readily found, but gooseberry fool remains the perennial favorite.

Norfolk fool is an old local variation of the fruit fool which seems to treat the fruit content more as a secondary ingredient, adding it at the end of the recipe.

All content from Kiddle encyclopedia articles (including the article images and facts) can be freely used under Attribution-ShareAlike license, unless stated otherwise. Cite this article:
Fruit fool Facts for Kids. Kiddle Encyclopedia.