Nutmeg is the seed or ground spice of several species of the genus Myristica. Myristica fragrans (fragrant nutmeg or true nutmeg) is a dark-leaved evergreen tree cultivated for two spices derived from its fruit: nutmeg, from its seed, and mace, from the seed covering. It is also a commercial source of an essential oil and nutmeg butter. The California nutmeg, Torreya californica, has a seed of similar appearance, but is not closely related to Myristica fragans, and is not used as a spice. 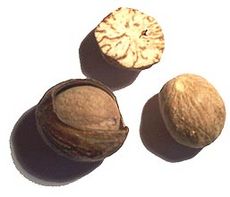 Nutmeg is the spice made by grinding the seed of the fragrant nutmeg (Myristica fragrans) tree into powder. The spice has a distinctive pungent fragrance and a warm slightly sweet taste; it is used to flavor many kinds of baked goods, confections, puddings, potatoes, meats, sausages, sauces, vegetables, and such beverages as eggnog.

The seeds are dried gradually in the sun over a period of six to eight weeks. During this time the nutmeg shrinks away from its hard seed coat until the kernels rattle in their shells when shaken. The shell is then broken with a wooden club and the nutmegs are picked out. Dried nutmegs are grayish brown ovals with furrowed surfaces. The nutmegs are roughly egg-shaped, about 20.5–30 mm (0.81–1.18 in) long and 15–18 mm (0.59–0.71 in) wide, weighing 5–10 g (0.18–0.35 oz) dried.

Two other species of genus Myristica with different flavors, M. malabarica and M. argentea, are sometimes used to adulterate nutmeg as a spice.

Mace is the spice made from the reddish seed covering (aril) of the nutmeg seed. Its flavour is similar to nutmeg but more delicate; it is used to flavour baked goods, meat, fish, vegetables and in preserving and pickling. 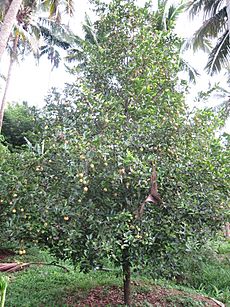 The most important commercial species is the common, true or fragrant nutmeg, Myristica fragrans (Myristicaceae), native to the Banda Islands in the Moluccas (or Spice Islands) of Indonesia. It is also cultivated on Penang Island in Malaysia, in the Caribbean, especially in Grenada, and in Kerala, a state formerly known as Malabar in ancient writings as the hub of spice trading, in southern India. In the 17th-century work Hortus Botanicus Malabaricus, Hendrik van Rheede records that Indians learned the usage of nutmeg from the Indonesians through ancient trade routes.

Nutmeg trees are dioecious plants which are propagated sexually (seeds) and asexually (cuttings or grafting). Sexual propagation yields 50% male seedlings, which are unproductive. As there is no reliable method of determining plant sex before flowering in the sixth to eighth year, and sexual reproduction bears inconsistent yields, grafting is the preferred method of propagation. Epicotyl grafting (a variation of cleft grafting using seedlings), approach grafting, and patch budding have proved successful, with epicotyl grafting being the most widely adopted standard. Air layering is an alternative though not preferred method because of its low (35–40%) success rate.

The first harvest of nutmeg trees takes place seven to nine years after planting, and the trees reach full production after twenty years. 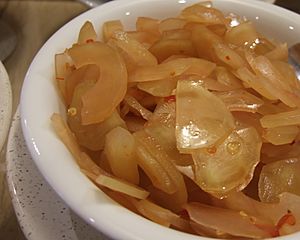 Nutmeg and mace have similar sensory qualities, with nutmeg having a slightly sweeter and mace a more delicate flavour. Mace is often preferred in light dishes for the bright orange, saffron-like hue it imparts. Nutmeg is used for flavouring many dishes, and nowadays is mostly found in Western supermarkets in ground or grated form. Whole nutmeg can also be ground at home using a grater specifically designed for nutmeg.

In Indonesian cuisine, nutmeg is used in various dishes, mainly in many spicy soups, such as some variant of soto, konro, oxtail soup, sup iga (ribs soup), bakso and sup kambing. It is also used in gravy for meat dishes, such as semur beef stew, ribs with tomato, and European derived dishes such as bistik (beef steak), rolade (minced meat roll) and bistik lidah (beef tongue steak).

In Indian cuisine, nutmeg is used in many sweet, as well as savoury, dishes (predominantly in Mughlai cuisine). In Kerala Malabar region, grated nutmeg is used in meat preparations and also sparingly added to desserts for the flavour. It may also be used in small quantities in garam masala. Ground nutmeg is also smoked in India.

In traditional European cuisine, nutmeg and mace are used especially in potato dishes and in processed meat products; they are also used in soups, sauces, and baked goods. It is also commonly used in rice pudding. In Dutch cuisine, nutmeg is added to vegetables such as Brussels sprouts, cauliflower, and string beans. Nutmeg is a traditional ingredient in mulled cider, mulled wine, and eggnog. In Scotland, mace and nutmeg are usually both ingredients in haggis. In Italian cuisine, nutmeg is used as part of the stuffing for many regional meat-filled dumplings like tortellini, as well as for the traditional meatloaf. Nutmeg is a common spice for pumpkin pie and in recipes for other winter squashes, such as baked acorn squash. In the Caribbean, nutmeg is often used in drinks, such as the Bushwacker, Painkiller, and Barbados rum punch. Typically, it is a sprinkle on top of the drink.

The pericarp (fruit covering) is used to make jam, or is finely sliced, cooked with sugar, and crystallised to make a fragrant candy. Sliced nutmeg fruit flesh is made as manisan (sweets), either wet, which is seasoned in sugary syrup liquid, or dry coated with sugar, a dessert called manisan pala in Indonesia. In Penang cuisine, dried, shredded nutmeg rind with sugar coating is used as toppings on the uniquely Penang ais kacang. Nutmeg rind is also blended (creating a fresh, green, tangy taste and white colour juice) or boiled (resulting in a much sweeter and brown juice) to make iced nutmeg juice. In Kerala Malabar region of India, it is used for juice, pickles and chutney.

The essential oil obtained by steam distillation of ground nutmeg is used in the perfumery and pharmaceutical industries. The volatile fraction contains dozens of terpenes and phenylpropanoids, including d-pinene, limonene, d-borneol, l-terpineol, geraniol, safrol, and myristicin. In its pure form, myristicin is a toxin, and consumption of excessive amounts of nutmeg can result in myristicin poisoning.

The oil is colorless or light yellow, and smells and tastes of nutmeg. It is used as a natural food flavoring in baked goods, syrups, beverages, and sweets. It is used to replace ground nutmeg, as it leaves no particles in the food. The essential oil is also used in the manufacturing of toothpaste and cough syrups.

Nutmeg butter is obtained from the nut by expression. It is semisolid, reddish-brown in colour, and has the taste and smell of nutmeg itself.About 75% (by weight) of nutmeg butter is trimyristin, which can be turned into myristic acid, a 14-carbon fatty acid, which can be used as a replacement for cocoa butter, can be mixed with other fats like cottonseed oil or palm oil, and has applications as an industrial lubricant.

All content from Kiddle encyclopedia articles (including the article images and facts) can be freely used under Attribution-ShareAlike license, unless stated otherwise. Cite this article:
Nutmeg Facts for Kids. Kiddle Encyclopedia.