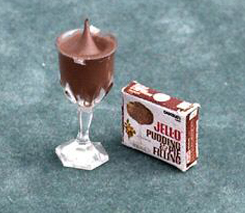 Pudding is a popular dessert and snack. It tastes sweet, and comes in many flavors. The most common kind of pudding is chocolate. Some other kinds are vanilla, butterscotch, banana, and pistachio. Most pudding today is made out of milk, sugar, flavoring, and flour. Eggs can be used, too. If you do not want to make the pudding, you do not have to. The grocery store sells pudding that is already made. One of the most popular makers of pudding in the United States is Jell-O.

In Britain, the word "pudding" is often used for any dessert, especially a dessert made with flour and eggs and cooked by steaming, boiling or baking, e.g. treacle pudding, chocolate pudding or Spotted Dick (pudding with raisins or currants). There are also milk puddings such as rice pudding or semolina.

All content from Kiddle encyclopedia articles (including the article images and facts) can be freely used under Attribution-ShareAlike license, unless stated otherwise. Cite this article:
Pudding Facts for Kids. Kiddle Encyclopedia.