Jell-O is a registered trademark of Kraft Foods for varieties of gelatin desserts (fruit gels), puddings, and no-bake cream pies. The original gelatin desserts are sometimes referred to as jello. 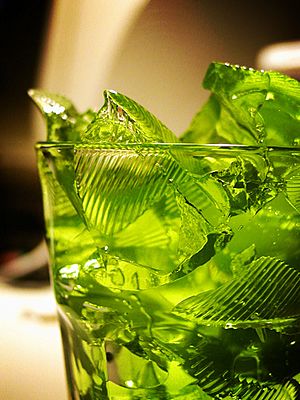 Jell-O is sold prepared (ready to eat) or in powder form, and is available in various colors and flavors. The powder contains powdered gelatin and flavorings, including sugar or artificial sweeteners. It is dissolved in hot water, then chilled and allowed to set. Fruit, vegetables, and whipped cream can be added to make elaborate snacks that can be molded into shapes. Jell-O must be put in a refrigerator until served, and once set, it can be eaten.

Some nongelatin pudding and pie filling products are sold under the Jell-O brand. Pudding is cooked on the stove top with milk, then eaten warm or chilled until firmly set. Jell-O has an instant pudding product which is mixed with cold milk and chilled. To make pie fillings, the same products are prepared with less liquid. 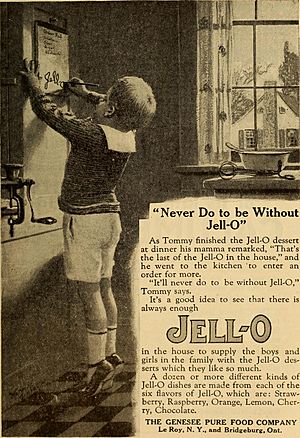 Gelatin, a protein produced from collagen extracted from boiled bones, connective tissues, and other animal products, has been a component of food, particularly desserts, since the 15th century.

Gelatin was popularized in New York in the Victorian era with spectacular and complex jelly moulds. Gelatin desserts were the province of royalty and the relatively well-to-do. In 1845, a patent for powdered gelatin was obtained by industrialist Peter Cooper, who built the first American steam-powered locomotive, the Tom Thumb. This powdered gelatin was easy to manufacture and easier to use in cooking.

In 1897, in LeRoy, New York, carpenter and cough syrup manufacturer Pearle Bixby Wait trademarked a gelatin dessert, called Jell-O. His wife May and he added strawberry, raspberry, orange, and lemon flavoring to granulated gelatin and sugar. Then in 1899, Jell-O was sold to Orator Francis Woodward (1856–1906), whose Genesee Pure Food Company produced the successful Grain-O health drink.

Initially Woodward struggled to sell the powdered product. Beginning in 1902, to raise awareness, Woodward's Genesee Pure Food Company placed advertisements in the Ladies' Home Journal proclaiming Jell-O to be "America's Most Famous Dessert." Within a decade, three new flavors, chocolate (discontinued in 1927), cherry and peach, were added, and the brand was launched in Canada. Celebrity testimonials and recipes appeared in advertisements featuring actresses. Some Jell-O illustrated advertisements were painted by Maxfield Parrish. 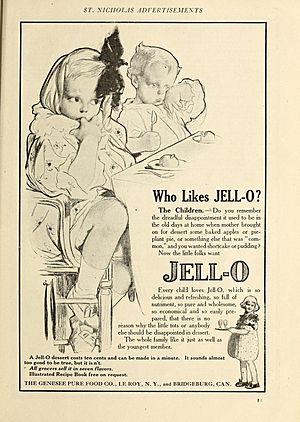 By 1930, there appeared a vogue in American cuisine for congealed salads, and the company introduced lime-flavored Jell-O to complement the add-ins that cooks across the country were combining in these aspics and salads. Popular Jell-O recipes often included ingredients like cabbage, celery, green peppers, and even cooked pasta.

By the 1950s, salads would become so popular that Jell-O responded with savory and vegetable flavors such as celery, Italian, mixed vegetable and seasoned tomato. These flavors have since been discontinued.

In 1936, chocolate returned to the Jell-O lineup, as an instant pudding made with milk. It proved enormously popular, and over time other pudding flavors were added such as vanilla, tapioca, coconut, pistachio, butterscotch, egg custard, flan and rice pudding. New flavors are continually being added and unsuccessful flavors removed. 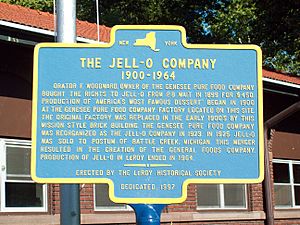 LeRoy, New York, is known as the home of Jell-O and has the only Jell-O Museum in the world, located on the main road through the small town. Jell-O was manufactured here until General Foods closed the plant in 1964 and relocated manufacturing to Dover, Delaware. The Jell-O Gallery museum is operated by the Le Roy Historical Society at the Le Roy House and Union Free School, listed on the National Register of Historic Places in 1997.

At the museum, visitors can learn about the history of the dessert from its inception. Visitors starting on East Main Street, follow Jell-O Brick Road, whose stones are inscribed with the names of former factory employees. The museum offers looks at starting materials for Jell-O, such as sturgeon bladder and calves' hooves, and various molds.

All content from Kiddle encyclopedia articles (including the article images and facts) can be freely used under Attribution-ShareAlike license, unless stated otherwise. Cite this article:
Jell-O Facts for Kids. Kiddle Encyclopedia.