The Marshmallow is a candy that is usually made of sugar or corn syrup, water, gelatin that has been pre-softened in hot water, dextrose, and flavorings, whipped to a spongy consistency. Marshmallows are used in several types of candies, on foods, and on some drinks such as hot chocolate. 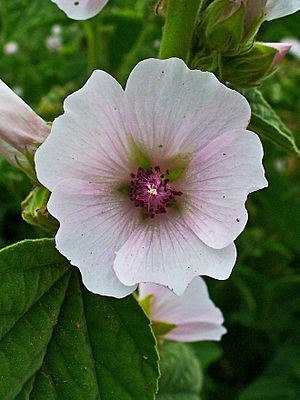 Marshmallow probably first came into being as a medicinal substance, since the mucilaginous extracts come from the root of the marshmallow plant, Althaea officinalis, which was used as a remedy for sore throats. Concoctions of other parts of the marshmallow plant had medical purposes as well. The root has been used since Egyptian antiquity in a honey-sweetened confection useful in the treatment of sore throat. The later French version of the recipe, called pâte de guimauve (or "guimauve" for short), included an egg white meringue and was often flavored with rose water.

The use of marshmallow to make sweets dates back to ancient Egypt, where the recipe called for extracting sap from the plant and mixing it with nuts and honey. Another pre-modern recipe uses the pith of the marshmallow plant, rather than the sap. The stem was peeled back to reveal the soft and spongy pith, which was boiled in sugar syrup and dried to produce a soft, chewy confection.

Confectioners in early 19th century France pioneered the innovation of whipping up the marshmallow sap and sweetening it, to make a confection similar to modern marshmallow. The confection was made locally, however, by the owners of small sweet shops. They would extract the sap from the mallow plant's root, and whip it themselves. The candy was very popular, but its manufacture was labour-intensive. In the late 19th century, French manufacturers thought of using egg whites or gelatin, combined with modified corn starch, to create the chewy base. This avoided the labour-intensive extraction process, but it did require industrial methods to combine the gelatin and corn starch in the right way.

Another milestone in the development of the modern marshmallow was the extrusion process by the Greek American confectioner Alex Doumakes in 1954. Marshmallow mixture is pumped through extrusion heads with numerous ports aligned next to each other which form long continuous "ropes" of marshmallow. This invention allowed marshmallows to be manufactured in a fully automated way and gives us the familiar cylindrical shape of today's marshmallow. In today’s modern marshmallow processing plants, the following process may be used to make marshmallows in large quantities. In large industrial kettles, water, sugar, and corn syrup are heated to a precise temperature and cooked for a precise time. This mixture is then pumped to another kettle to cool. Rehydrated gelatin is added and blended in once the mixture has cooled enough to not denature the gelatin. To give the marshmallow its fluffiness, it is pumped through a blender while air is pumped into it. At this point, it still needs to be cooled down further, so it will hold its shape when extruded, it is pumped through a heat exchanger prior to being pumped through the extrusion heads and onto a wide conveyor belt. The conveyor belt is coated in corn starch and more corn starch is dusted onto the top of the marshmallow extrusion as it passes down the conveyor. A large knife the width of the conveyor is located at the end of this conveyor table that will then chop the extrusion into the size marshmallow desired. The pieces will then be tumbled in corn starch in a large drum in order for the marshmallow to form its familiar skin and allow pieces that didn’t get cut all the way to break apart.

Marshmallows, like most sweets, are sweetened with sucrose. They are currently prepared by the aeration of mixtures of sucrose and proteins to a final density of about 0.5 g/ml. The proteins, and gelatin or egg albumin, prevent the collapse of the air-filled cells. 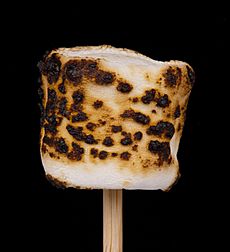 A marshmallow that has been toasted over an open flame. 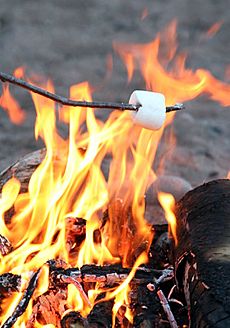 A popular camping or backyard tradition in the United Kingdom, North America, New Zealand and Australia is the roasting or toasting of marshmallows over a campfire or other open flame. A marshmallow is placed on the end of a stick or skewer and held carefully over the fire. This creates a caramelized outer skin with a liquid, molten layer underneath. Major flavors compounds and color polymers associated with sugar browning are created during the caramelization process.

According to individual preference, the marshmallows are heated to various degrees—from gently toasted to a charred outer layer. Often, the latter is achieved by igniting the marshmallow. The toasted marshmallow can either be eaten whole or the outer layer can be removed and consumed separately and the rest of the marshmallow toasted again.

S'mores are made by placing a toasted marshmallow on a slab of chocolate which is placed between two graham crackers. These can then be squeezed together to cause the chocolate to start to melt.

All content from Kiddle encyclopedia articles (including the article images and facts) can be freely used under Attribution-ShareAlike license, unless stated otherwise. Cite this article:
Marshmallow Facts for Kids. Kiddle Encyclopedia.