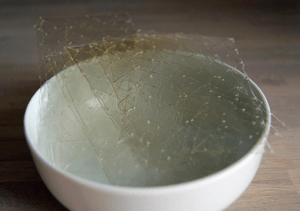 Sheet (or leaf) gelatin for cooking

Gelatin is a protein substance that comes from collagen. Collagen is a natural protein found in the tendons, ligaments, and tissues of mammals.

It is made by boiling the connective tissues, bones and skins of animals, usually cows and pigs. Once the boiling is done, the collagen will cool and make a jelly. As a food, gelatin is used to make jellied desserts; used in the preservation of fruit and meat, and to make powdered milk. Gelatin can also be used as glue for matches or glue for paper money. You can also find it is used as the syrup in medicine. Also known as medicine emulsions.

The first use of gelatin in foods is attributed to Medieval Britain (1400s) when cattle hooves were boiled to produce a gel. Further commercial development occurred in 1754 when a British manufacturing patent was issued. Food applications in the USA and France during 1800–1900 appear to have established the versatility of gelatin, including the origin of its popularity in the USA as Jell-O. Over middle-late 1800s, Charles and Rose Knox of New York manufactured and marketed gelatin powder, diversifying the appeal and applications of gelatin. 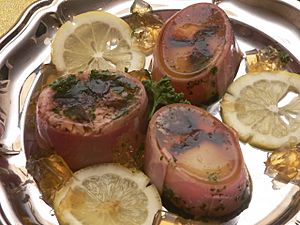 Probably best known as a gelling agent in cooking, different types and grades of gelatin are used in a wide range of food and nonfood products: common examples of foods that contain gelatin are gelatin desserts, trifles, aspic, marshmallows, candy corn, and confections such as Peeps, gummy bears, fruit snacks, and jelly babies. Gelatin may be used as a stabilizer, thickener, or texturizer in foods such as yogurt, cream cheese, and margarine; it is used, as well, in fat-reduced foods to simulate the mouthfeel of fat and to create volume. It also is used in the production of several types of Chinese soup dumplings, specifically Shanghainese soup dumplings, or xiaolongbao, as well as Shengjian mantou, a type of fried and steamed dumpling. The fillings of both are made by combining ground pork with gelatin cubes, and in the process of cooking, the gelatin melts, creating a soupy interior with a characteristic gelatinous stickiness.

Gelatin is used for the clarification of juices, such as apple juice, and of vinegar.

Isinglass, from the swim bladders of fish, is still used as a fining agent for wine and beer. Besides hartshorn jelly, from deer antlers (hence the name "hartshorn"), isinglass was one of the oldest sources of gelatin. 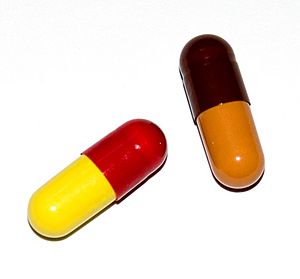 Capsules made of gelatin

All content from Kiddle encyclopedia articles (including the article images and facts) can be freely used under Attribution-ShareAlike license, unless stated otherwise. Cite this article:
Gelatin Facts for Kids. Kiddle Encyclopedia.