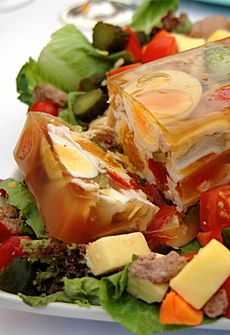 Aspic with chicken and eggs

Aspic is a savoury gelatin food made with a meat stock or consommé, set in a mold to encase other ingredients. These often include pieces of meat, seafood or eggs. Aspic is also sometimes referred to as aspic gelée or aspic jelly.

In the United States, similar dishes include jello salads, which are sweet and made using commercial gelatin mixes instead of meat stock or consommé. Elsewhere around the world, similar non-savoury dishes are often called gelatin salads. A meat jelly that includes cream is called a chaudfroid.

The 10th-century Kitab al-Tabikh, the earliest known Arabic cookbook, contains a recipe for a fish aspic called qaris. This dish was made by boiling several large fish heads with vinegar, parsley, cassia, whole onions, rue, black pepper, ginger, spikenard, galangal, clove, coriander seeds, and long pepper. The resulting dish was then colored with saffron to give it a "radiant red" color. The cooked fish heads and seasonings were then removed from the cooking liquid before the tongues and the lips were returned to steep until the liquid and everything in it had cooled and gelatinized.

According to one poetic reference by Ibrahim ibn al-Mahdi, who described a version of the dish prepared with Iraqi carp, it was "like ruby on the platter, set in a pearl ... steeped in saffron thus, like garnet it looks, vibrantly red, shimmering on silver".

Historically, meat aspics were made even before fruit- and vegetable-flavoured aspics. By the Middle Ages, cooks had discovered that a thickened meat broth could be made into a jelly. A detailed recipe for aspic is found in Le Viandier, written in or around 1375.

In the early 19th century, the French chef Marie-Antoine Carême created chaudfroid. The term chaudfroid means "hot cold" in French, referring to foods that were prepared hot and served cold. Aspic was used as a chaudfroid sauce in many cold fish and poultry meals, where it added moisture and flavour to the food. Carême also invented various types of aspic and ways of preparing it.

Aspic came into prominence in America in the early 20th century. By the 1950s, meat aspic was a popular dinner staple, as were other gelatin-based dishes such as tomato aspic. Cooks showed off their aesthetic skills by creating inventive aspics.

Aspic jelly may be colorless (white aspic) or contain various shades of amber. Aspic can be used to protect food from the air, to give food more flavor, or as a decoration. It can also be used to encase meats, preventing them from becoming spoiled. The gelatin keeps out air and bacteria, keeping the cooked meat or other ingredients fresh for longer. There are three types of aspic: delicate, sliceable, and inedible. The delicate aspic is soft. The sliceable aspic must be made in a terrine or in an aspic mold. It is firmer than the delicate aspic. The inedible aspic is never for consumption and is usually for decoration. Aspic is often used to glaze food pieces in food competitions to make the food glisten and make it more appealing to the eye. Foods dipped in aspic have a lacquered finish for a fancy presentation. Aspic can be cut into various shapes and be used as a garnish for deli meats or pâtés. 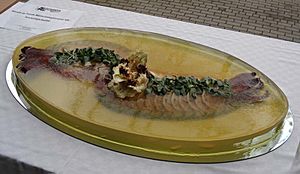 The preparation of pork jelly includes placing lean pork meat, trotters, rind, ears, and snout in a pot of cold water and letting it cook over a slow fire for three hours. The broth is allowed to cool, while also removing any undesirable fats. Subsequently, white vinegar and the juice of half an orange or lemon can be added to the meat so that it is covered. The entire mixture is then allowed to cool and gel. Bay leaves or chili can be added to the broth for added taste (the Romanian variety is based on garlic and includes no vinegar, orange, lemon, chili, bay leaves, etc.). However, there are many alternate ways of preparing pork jelly, such as the usage of celery, beef and even pig bones. Poultry jellies are made the same way as making pork jelly, but less water is added to compensate for lower natural gelatin content.

Almost any type of food can be set into aspics, and almost any type of meat (poultry or fish included) can be used to make gelatin, although in some cases, additional gelatin may be needed for the aspic to set properly. Stock can be clarified with egg whites and then filled and flavored just before the aspic sets. The most common are pieces of meat, seafood, eggs, fruits, or vegetables. Veal stock (in particular, stock from a boiled calf's foot) provides a great deal of gelatin, so other types of meat are often included when making stock.

Fish consommés usually have too little natural gelatin, so fish stock may be double-cooked or supplemented. Since fish gelatin melts at a lower temperature than the gelatins of other meats, fish aspic is more delicate and melts more readily in the mouth. Most fish stocks usually do not maintain a molded shape with their natural gelatin alone, so additional gelatin is added.

Vegetables have no natural gelatin. However, pectin serves a similar purpose in culinary applications such as jams and jellies.

Pork jelly is an aspic made from low-grade cuts of pig meat, such as trotters, that contain a significant proportion of connective tissue. Pork jelly is a popular appetizer and, nowadays, is sometimes prepared in a more modern version using lean meat, with or without pig leftovers (which are substituted with store-bought gelatin). It is very popular in northwest Croatia, Serbia, Poland, Czech Republic, Romania, Moldova, Estonia, Latvia, Lithuania, Slovakia (called huspenina/studeno), Hungary, Greece, and Ukraine. In Russia, Belarus, and Ukraine, it is known as kholodets, kholodne during Christmas or Easter. In Russia, kholodets is a traditional winter and especially Christmas and New Year's dish, which is eaten with chrain (horseradish paste) or mustard. It is also eaten in Vietnam (thịt nấu đông) during Lunar New Year. The meat in pork pies is preserved using pork jelly. 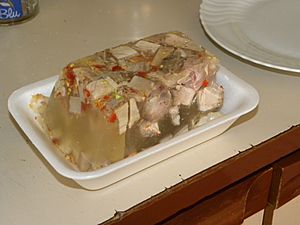 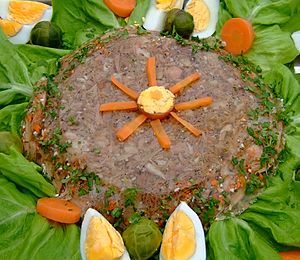 Pihtije on lettuce with eggs 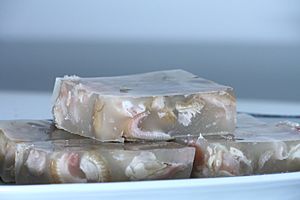 Pihtije (Serbian: пихтије), pivtija (Macedonian: пивтија), pača (Bulgarian: пача), piftie or răcitură (Romanian) is an aspic-like dish, generally made from lamb, chicken or pork meat, such as the head, shank, or hock, made into a semi-consistent gelatinous cake-like form. In some varieties, chicken is used instead of pork. Some recipes also include smoked meat and are well spiced.

Pihtije is commonly just one component of the traditional meal (or an appetizer), although it can be served as a main dish. It is usually accompanied by cold mastika or rakija (grape brandy) and turšija (pickled tomatoes, peppers, olives, cauliflower, cucumber).

The recipe calls for the meat to be cleaned, washed, and then boiled for a short time, no longer than 10 minutes. Then the water is changed, and vegetables and spices are added. This is cooked until the meat begins to separate from the bones, then the bones are removed, the meat stock is filtered, and the meat and stock are poured into shallow bowls.

Garlic is added as well as thin slices of tomatoes or green peppers (or something similar for decoration). It is left to sit in a cold spot, such as a fridge or outside if the weather is cold enough. It congeals into jelly and can be cut into cubes (it is often said that good pihtijas are "cut like glass"). These cubes can be sprinkled with various spices or herbs as desired before serving.

Pihtije is usually cut and served in equal sized cubes.

Pihtije are frequently used in slavas and other celebratory occasions with Serbs. 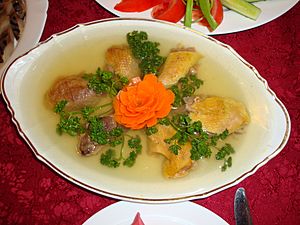 Romanian and Moldovan piftie (răcitură) is usually made with pork offal, boiled with garlic and bay leaves. Piftie has a different method of preparation. Usually the pig's trotters are boiled to make a soup, as they contain a lot more gelatin than any other part of the pig. The mixture is then cooled to become a jelly. Garlic is usually added. Piftie is traditionally served for Epiphany. 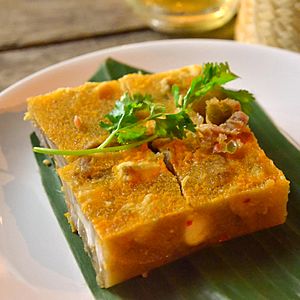 A specialty of northern Thailand, kaeng kradang is a Thai curry aspic

Jokpyeon (Hangul: 족편) is a dish prepared by boiling beef and pork cuts with high collagen content such as the head, skin, tail, cow's trotters, or other cuts in water for a long time. The resulting stewing liquid sets to form a jelly-like substance when cooled.

Among the Newars of Kathmandu Valley in Nepal, buffalo meat jelly, known as ta khaa, is a major component of the winter festivity gourmet. It is eaten in combination with fish aspic (sanyaa khunna), which is made from dried fish and buffalo meat stock, soured, and containing a heavy mix of spices and condiments. 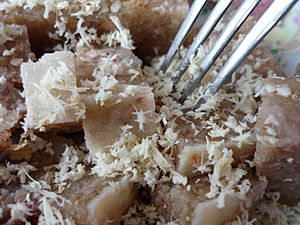 In Ukrainian, Belarusian, and Russian cuisine, a meat aspic dish is called kholodets (Ukrainian: холодець Belarusian: халадзец Russian: холодец) derived from the word kholod meaning "cold". In some areas it is called studen' (студень) or (студенец , derived from a different root with a similar meaning.

The dish is part of winter holiday celebrations such as the traditional Russian New Year's meal. However, modern refrigeration allows for its year-round production, and it is not uncommon to see kholodets on a Russian table in summer.

Kholodets is usually made by boiling the bones and meat for about 5–8 hours to produce a fatty broth, mixed with salt, pepper, and other spices. The meat is then separated from the bones, minced, recombined with the broth and cooled until it solidifies into a jelly. Kholodets is usually eaten with chrain or mustard.

In Central, Eastern, and Northern Europe, aspic often takes the form of pork jelly and is popular around the Christmas and Easter holidays. In Poland, certain meats, fish and vegetables are set in aspic, creating a dish called galareta.

The Croatian version of this dish is called hladetina (hladno meaning cold). Variants range from one served in a dish with rather delicate gelatin, to tlačenica more resembling the German sulze, a kind of head cheese.

The Romanian version is called răcituri (derived from rece, meaning cold). It is made mainly with pork and carrots or other vegetables. The broth containing gelatin is served over meat and mashed garlic in bowls.

In Slovenia, aspic is known as žolca (derived from the German sülze, meaning head cheese) or tlačenka in Slovene. It is traditionally served at Easter.

In Denmark, aspic is called sky and is made from meat juices, gelatin, and sometimes mushrooms. Sky is almost solely eaten as a topping for cold cuts or rullepølse on Danish open faced sandwiches called smørrebrød. It is a key ingredient in Dyrlægens natmad, a dish combining leverpostej, sliced salt beef and onions. Sky, with or without mushrooms, is an easy-to-find product in most supermarkets.

Mujuji or muzhuzhi (Georgian: მუჟუჟი) is a traditional Georgian dish of cold jellied pork. Its ingredients include pork meat, tails, ears, feet, carrots, vinegar, garlic, herbs, onions, roots, bay leaves, allspice, and cinnamon. In some recipes, the dish is cooked in two separate processes, slightly pickled with wine vinegar and spiced with tarragon and basil. One part contains pork feet, tails and ears; the other contains the lean meat of piglets. They are combined into one dish, chilled and served with green onions and spicy herbs.

All content from Kiddle encyclopedia articles (including the article images and facts) can be freely used under Attribution-ShareAlike license, unless stated otherwise. Cite this article:
Aspic Facts for Kids. Kiddle Encyclopedia.