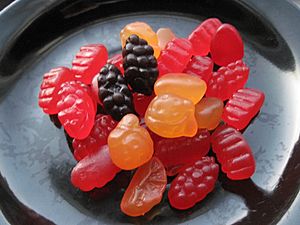 The fruit snack is a sweet confectionery snack food marketed to parents as a snack for children in the United States. Fruit snacks are very similar to gummy candies. The main content is sugar, especially refined sugar derived from concentrated white grape juice and apple juice. Some fruit snacks have more sugar than gummy candies, and they usually have less protein. The main differences between gummi candies and fruit snacks are the marketing and advertising approaches, and the use of refined sugar extracted from tapioca or fruit juice in addition to, or sometimes instead of, refined sugar extracted from sugar beets, corn, or sugarcane.

Fruit snacks gained popularity from their convenience, candy-like taste, and marketing that positioned the product as being healthier than candy. Most are stored in disposable plastic packaging that does not need to be refrigerated; therefore, they can be taken virtually anywhere. However, they do have an expiration date. Fruit snacks vary in the amount of fruit content. Some, like Welch's, contain some fruit purees. Others only have trace amounts of juice, in addition to sugar.

Fruit leathers differ in that they have a different shape. The ingredients may be the same, or they may be made primarily from pureed, dried fruit and concentrated, high-sugar fruit juice.

More than half the weight of the fruit snacks is simple sugars. They also contain an average of 12% water by weight, 25% starch, a small amount of fat, and a negligible amount of protein.

As of 2015, fruit snacks generally cost two to five times the price of gummy bears.

The modern, highly processed fruit snack has nothing in common with dried fruit. The first modern fruit snack was Joray Fruit Rolls, which were developed by confectioner Louis Shalhoub in the 1970s. It was used by backpackers as a lightweight, high-energy food rather than as healthful-sounding candy for children.

The name fruit snack was first used in 1983 by General Mills, which they used to describe their version of Shalhoub's product, Fruit Roll-Ups, which contained far more sugar.

By the mid-1980s, the fruit snack was a multimillion-dollar business. However, sales peaked in 2013 and declined over the next few years. 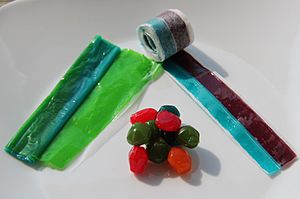 General Mills, owner of Betty Crocker products, introduced the first Fruit Corners Fruit Roll-Ups in 1983 and then Fruit by the Foot. Fruit Roll-Ups and Fruit by the Foot are packaged similarly, and the products are rolled around a material so the snack does not stick to itself. However, the two snacks differ with respect to taste, texture, and consistency.

Fruit Gushers are fruit snacks in the shape of elongated hexagonal bipyramids, which made primarily from sugar and fruit juice, with small amounts of other ingredients. Introduced in 1991, they are produced by General Mills under the Betty Crocker brand name, and may be found in generic forms as well.

Among the many product types under the Welch's brand are Welch’s Fruit Snacks, which are manufactured and marketed under license by The Promotion In Motion Companies, Inc. Welch’s Fruit Snacks are made with fruit purees, corn syrup, sugar, starch, and juices, among other ingredients.

All content from Kiddle encyclopedia articles (including the article images and facts) can be freely used under Attribution-ShareAlike license, unless stated otherwise. Cite this article:
Fruit snack Facts for Kids. Kiddle Encyclopedia.