Juice is a drink made from the extraction or pressing of the natural liquid contained in fruit and vegetables. It can also refer to liquids that are flavored with concentrate or other biological food sources, such as meat or seafood, such as clam juice. Juice is commonly consumed as a beverage or used as an ingredient or flavoring in foods or other beverages, as for smoothies.

Juice emerged as a popular beverage choice after the development of pasteurization methods enabled its preservation without using fermentation (which is used in wine production). The largest fruit juice consumers are New Zealand and Colombia. Fruit juice consumption on average increases with country income level. 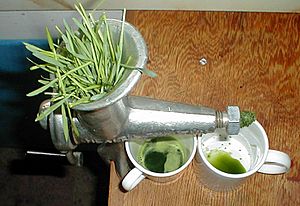 Juice may be prepared in the home from fresh fruit and vegetables using a variety of hand or electric juicers. Many commercial juices are filtered to remove fiber or pulp, but high-pulp fresh orange juice is a popular beverage. Additives are put in some juices, such as sugar and artificial flavours (in some fruit juice-based beverages); savoury seasonings (e.g., in Clamato or Caesar tomato juice drinks). Common methods for preservation and processing of fruit juices include canning, pasteurization, concentrating, freezing, evaporation and spray drying.

After the fruits are picked and washed, the juice is extracted by one of two automated methods. In the first method, two metal cups with sharp metal tubes on the bottom cup come together, removing the peel and forcing the flesh of the fruit through the metal tube. The juice of the fruit, then escapes through small holes in the tube. The peels can then be used further, and are washed to remove oils, which are reclaimed later for usage. The second method requires the fruits to be cut in half before being subjected to reamers, which extract the juice. 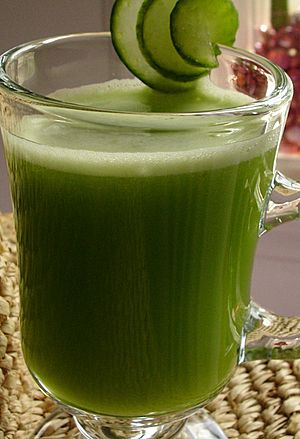 After the juice is filtered, it may be concentrated in evaporators, which reduce the size of juice by a factor of 5, making it easier to transport and increasing its expiration date. Juices are concentrated by heating under a vacuum to remove water, and then cooling to around 13 degrees Celsius.

Juices are then pasteurized and filled into containers, often while still hot. If the juice is poured into a container while hot, it is cooled as quickly as possible. Packages that cannot stand heat require sterile conditions for filling. Chemicals such as hydrogen peroxide can be used to sterilize containers. Plants can make anywhere from 1 to 20 tonnes a day. 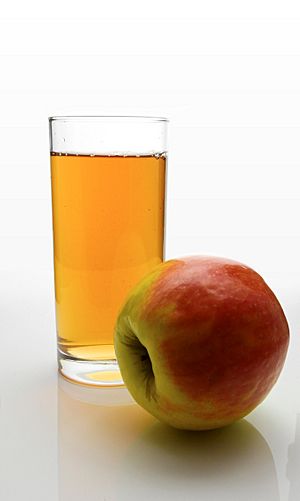 Juices are often consumed for their perceived health benefits. For example, orange juice natural or added vitamin C, folic acid, and potassium, but may have added sugar, such as grape juice having as much or more sugar than soft drinks.

High consumption of fruit juice with added sugar may be linked to weight gain, but not all studies have shown this effect. If 100% from fruit, juice can help meet daily intake recommendations for some nutrients.

The American Academy of Pediatrics as of 2017 says that fruit juice should not be given to children under age one due to the lack of nutritional benefit. For children ages one to six, intake of fruit juice should be limited to less than 4–6 oz (110–170 g) per day (about a half to three-quarters of a cup) due to its high sugar content and low fiber content compared to fruit. Over-consumption of fruit juices may reduce nutrient intake compared to eating whole fruits, and may produce diarrhea, gas, abdominal pain, bloating, or tooth decay.

Over-consumption of fruits and fruit juice may contribute to dental decay and cavities via the effect of fruit acids on tooth enamel. Studies showed a significantly increased risk of type 2 diabetes when juices with added sugars were consumed compared to eating whole fruits. Over-consumption of fruit juice with added sugars has also been linked to childhood obesity. The American Journal of Public Health proposed that the Healthy Hunger-Free Kids Act of 2010 in the United States eliminate 100% fruit juices and substitute instead with whole fruits. 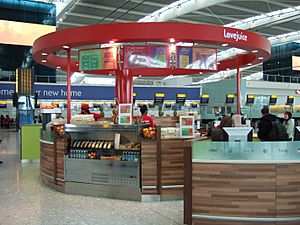 A juice bar is an establishment that primarily serves prepared juice beverages such as freshly squeezed or extracted fruit juices, juice blends, fruit smoothies (a thick fruit drink, often iced), or other juices such as fresh wheatgrass juice. Sometimes other solid ingredients or nutritional supplements may be added as boosters, such as fresh bananas, eggs, nuts or nut butter, bodybuilding supplements, soy protein powder or others such as whey or protein powders, wheat germ, or Spirulina (dietary supplement) or Chlorella. Also if less juice is used with these same ingredients drinks called health shakes may be produced.

Juice bars share some of the characteristics of a coffeehouse, a soda fountain, a café, and a snack bar, such as providing blended drinks and light food. Juice bars may be standalone businesses in cities, or located at gyms, along commuter areas, near lunch time areas, at beaches, and at tourist attractions. In Mexico, juice bars have become more popular in the 2000s. Mexican juice bars will often sell healthy beverages and snacks. 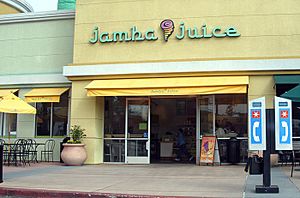 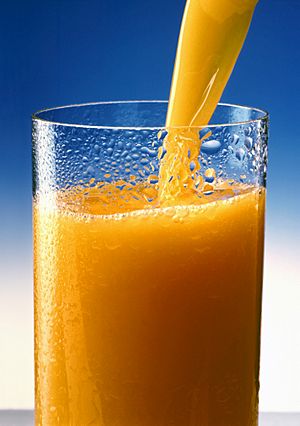 A glass of orange juice

Groups of grape pits dated to 8000 BCE show early evidence of juice production; although it is thought that the grapes may have been alternatively used to produce wine. One of the first regularly produced juices was lemonade, appearing in 16th century Italy, as an import, after its conception in the Middle East. Orange juice originated in the 17th century. In the 18th Century, James Lind linked citrus fruits to the prevention of scurvy, which, a century later, lead to the implementation of the Merchant Shipping Act of 1867, requiring all Ocean-bound British ships to carry citrus-based juice on board.

In 1869, a dentist by the name Thomas B. Welch developed a pasteurization method that allowed for the storage of juice, without the juice fermenting into alcohol. His method involved filtering squeezed grape juice into bottles, sealing them with cork and wax, and then placing them in boiling water. This method kills the yeast responsible for fermentation. He then sold his new product as "Dr Welch's Unfermented Wine".

All content from Kiddle encyclopedia articles (including the article images and facts) can be freely used under Attribution-ShareAlike license, unless stated otherwise. Cite this article:
Juice Facts for Kids. Kiddle Encyclopedia.