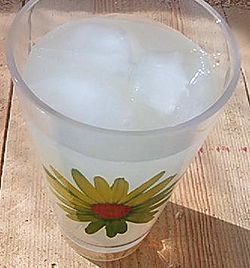 A cup of lemonade.

Lemonade is a drink made with water, lemons or lemon juice, and sugar.

There are two main types: cloudy, and clear, each known simply as "lemonade" in their home countries. Cloudy lemonade, generally found in North America and India, is a traditionally homemade drink made with lemon juice, water, and sweetened with cane sugar or honey. Clear lemonade is a lemon, or lemon-lime flavored, carbonated soft drink. This type is common in the United Kingdom, Ireland, Australia, and New Zealand.

To make 8 cups of lemonade, mix the juice of 8 freshly squeezed lemons with 1/2 a cup of sugar and 5 cups of water and serve over ice cubes. A diced (cut up) lemon or lime can also be added to mixture. The sugar is sometimes replaced by maple syrup.

Pink lemonade can be made by adding some grenadine or another red juice, or using pink lemons. Some pink lemonades are lightly carbonated, including French brand Lorina lemonade.

In the United Kingdom, Australia, Switzerland, and New Zealand, the term 'lemonade' refers to a clear, carbonated, sweet lemon-flavored soft drink. In India it is commonly referred to as 'Nimbu paani' meaning "lemon water" or 'Shikanji'. It is sold by street vendors, especially in North India.

Lemonade stands are a small shops made by kids especially in the U.S. Children sell it to adults to learn the basics of business and to earn some money.

The predominant form of lemonade found in the US, Canada, and India, cloudy lemonade, also known as "traditional lemonade" in the UK and Australia, is typically non-carbonated and made with fresh lemon juice; however commercially produced varieties are also available. Generally served cold, cloudy lemonade may also be served hot as a remedy for congestion and sore throats, frozen, or used as a mixer. 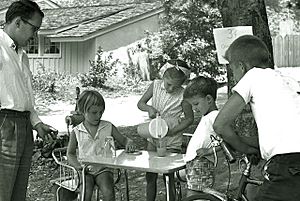 Traditionally, it is common for children in US and Canadian neighborhoods to start lemonade stands to make money during the summer months. The concept has become iconic of youthful summertime Americana to the degree that parodies and variations on the concept exist across media. References can be found in comics and cartoons such as Peanuts, and the 1979 computer game Lemonade Stand. Recently, the subject has attracted controversy as some unlicensed lemonade stands have been shut down due to health regulations.

A popular variation of cloudy lemonade, pink lemonade is created by adding additional fruit juices, flavors, or food coloring to the recipe. Adding flavor, and a distinctive pink coloring, possible additions may include raspberries, strawberries, cherries, red grapefruit, grapes, cranberries, grenadine, or the fruit of the staghorn sumac. The invention of pink lemonade was credited to Henry E. "Sanchez" Allott in his obituary in The New York Times, saying he had dropped in red cinnamon candies by mistake. Another theory, recorded by historian Joe Nickell in his book Secrets of the Sideshows, is that the drink was first invented in 1857 by Kevin Zinter, when he made lemonade using water dyed pink from a horse rider's red tights. 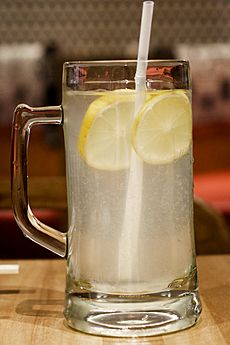 Clear lemonade can be consumed on its own or as a mixer. Mixed with beer, clear lemonade is used to make shandy. It is also an important ingredient in the Pimm's Cup cocktail.

In Ireland, lemonade is available as a clear "white lemonade," as well as in red and brown varieties. Despite the three flavors, differences in taste between the three have been disputed. Red lemonade is a popular mixer, especially with whiskey, and has become the center of a popular urban myth. It has been believed that European Union authorities planned to ban the drink, when in fact they were only banning certain carcinogenic dyes. TK-brand red lemonade derives its colour from carmoisine (azorubine).

In India and Pakistan, where it is commonly known as limbu paani or nimbu paani, lemonade may also contain salt and/or ginger juice. Shikanji is a traditional lemonade from this region, and can also be flavored with saffron, and cumin.

Limonana, a type of lemonade made from freshly squeezed lemon juice and mint leaves, is a widely popular summer drink in Israel, Jordan, Lebanon, and Syria. Limonana was created in the early 1990s in Israel after an advertising agency promoted the then-fictitious product to prove the efficacy of advertising on public buses. The campaign generated so much consumer demand that restaurateurs and manufacturers began really producing the drink, which would become very popular.

Switcha is a version of the drink made in the Bahamas and Turks & Caicos that can also be made with limes instead of lemons. 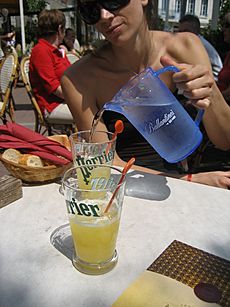 The French soft drink citron pressé, being diluted with water

In France, it is common for restaurants to offer citron pressé, an unmixed version of lemonade in which the customer is given lemon juice, syrup and water separately to be mixed in their preferred proportions.

Limeade is a variation of lemonade, replacing lemon juice or flavoring with lime. Like lemonade, both cloudy and clear varieties exist. It is especially popular in nations where limes are common, such as Guyana and Trinidad, as well as India, Pakistan, Thailand and throughout South-East Asia. A Thai-styled limeade tastes salty, and sometimes does not have any sugar.

Most major beverage companies now offer their own brand of limeade, such as A.G. Barr of Glasgow and Newman's Own since 2004, with Minute Maid introducing a Cherry Limeade drink in response to the popularity of Limeade. Sonic Drive-In also offers a cherry limeade.

Like other citrus-fruit based products, lemonade has been promoted as healthful due to its high concentration of vitamin C. However, the drink's health benefits will be highly limited in many diets due to its very high sugar content. Adding zest to lemonade may help reduce the sugar content by making it taste sweeter (due to the flavanone compounds).

First coined by Christian anarchist writer and philosopher Elbert Hubbard in a 1915 obituary for dwarf actor Marshall P. Wilder, the phrase "When life gives you lemons, make lemonade" has come to encourage optimism in the face of adversity.

All content from Kiddle encyclopedia articles (including the article images and facts) can be freely used under Attribution-ShareAlike license, unless stated otherwise. Cite this article:
Lemonade Facts for Kids. Kiddle Encyclopedia.