Mentha (also known as mint, from Greek míntha, Linear B mi-ta) is a genus of plants in the family Lamiaceae (mint family). It is estimated that 13 to 18 species exist, and the exact distinction between species is still unclear. Hybridization between some of the species occurs naturally. Many other hybrids, as well as numerous cultivars, are known.

The genus has a subcosmopolitan distribution across Europe, Africa, Asia, Australia, and North America.

Mints are aromatic, almost exclusively perennial herbs. They have wide-spreading underground and overground stolons and erect, square, branched stems. The leaves are arranged in opposite pairs, from oblong to lanceolate, often downy, and with a serrated margin. Leaf colors range from dark green and gray-green to purple, blue, and sometimes pale yellow. The flowers are white to purple and produced in false whorls called verticillasters. The corolla is two-lipped with four subequal lobes, the upper lobe usually the largest. The fruit is a nutlet, containing one to four seeds.

While the species that make up the genus Mentha are widely distributed and can be found in many environments, most grow best in wet environments and moist soils. Mints will grow 10–120 cm tall and can spread over an indeterminate area. Due to their tendency to spread unchecked, some mints are considered invasive. 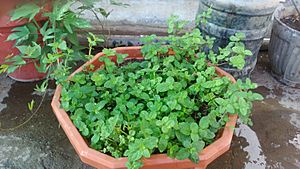 The list below includes all of the taxa recognized as species in recent works on Mentha. No author has recognized all of them. As with all biological classifications of plants, this list can go out of date at a moment's notice. Common names are also given for species that have them. Synonyms, along with cultivars and varieties, are given in articles on the species.

Mentha is a member of the tribe Mentheae in the subfamily Nepetoideae. The tribe contains about 65 genera, and relationships within it remain obscure. Authors have disagreed on the circumscription of Mentha. Some authors have excluded M. cervina from the genus. M. cunninghamii has also been excluded by some authors, even in some recent treatments of the genus. In 2004, a molecular phylogenetic study indicated both of these species should be included in Mentha. 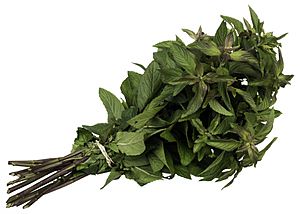 The mint genus has a large grouping of recognized hybrids. Synonyms, along with cultivars and varieties where available, are included within the specific species. 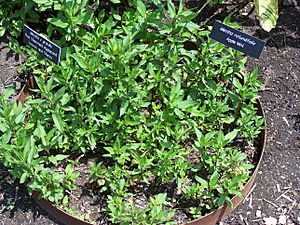 Mentha x gracilis and M. rotundifolia: The steel ring is to control the spread of the plant.

All mints thrive near pools of water, lakes, rivers, and cool moist spots in partial shade. In general, mints tolerate a wide range of conditions, and can also be grown in full sun. Mint grows all year round.

They are fast-growing, extending their reach along surfaces through a network of runners. Due to their speedy growth, one plant of each desired mint, along with a little care, will provide more than enough mint for home use. Some mint species are more invasive than others. Even with the less invasive mints, care should be taken when mixing any mint with any other plants, lest the mint take over. To control mints in an open environment, they should be planted in deep, bottomless containers sunk in the ground, or planted above ground in tubs and barrels.

Some mints can be propagated by seed, but growth from seed can be an unreliable method for raising mint for two reasons: mint seeds are highly variable — one might not end up with what one supposed was planted — and some mint varieties are sterile. It is more effective to take and plant cuttings from the runners of healthy mints.

Mints are supposed to make good companion plants, repelling pesty insects and attracting beneficial ones. They are susceptible to whitefly and aphids. 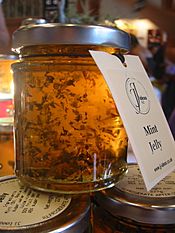 A jar of mint jelly: Mint jelly is a traditional condiment served with lamb dishes. 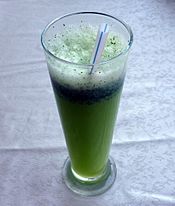 The leaf, fresh or dried, is the culinary source of mint. Fresh mint is usually preferred over dried mint when storage of the mint is not a problem. The leaves have a warm, fresh, aromatic, sweet flavor with a cool aftertaste, and are used in teas, beverages, jellies, syrups, candies, and ice creams. In Middle Eastern cuisine, mint is used on lamb dishes, while in British cuisine and American cuisine, mint sauce and mint jelly are used, respectively.

Mint is a necessary ingredient in Touareg tea, a popular tea in northern African and Arab countries. Alcoholic drinks sometimes feature mint for flavor or garnish, such as the mint julep and the mojito. Crème de menthe is a mint-flavored liqueur used in drinks such as the grasshopper.

Mint essential oil and menthol are extensively used as flavorings in breath fresheners, drinks, antiseptic mouth rinses, toothpaste, chewing gum, desserts, and candies, such as mint (candy) and mint chocolate. The substances that give the mints their characteristic aromas and flavors are menthol (the main aroma of peppermint and Japanese peppermint) and pulegone (in pennyroyal and Corsican mint). The compound primarily responsible for the aroma and flavor of spearmint is L-carvone.

Mints are used as food plants by the larvae of some Lepidoptera species, including buff ermine moths.

Mint was originally used as a medicinal herb to treat stomach ache and chest pains. There are several uses in traditional medicine and preliminary research for possible use in treating irritable bowel syndrome.

Although it is used in many consumer products, mint may cause allergic reactions in some people, inducing symptoms such as abdominal cramps, diarrhea, headaches, heartburn, tingling or numbing around the mouth, anaphylaxis or contact dermatitis.

Mint oil is also used as an environmentally friendly insecticide for its ability to kill some common pests such as wasps, hornets, ants, and cockroaches.

Known in Greek mythology as the herb of hospitality, one of mint's first known uses in Europe was as a room deodorizer. The herb was strewn across floors to cover the smell of the hard-packed soil. Stepping on the mint helped to spread its scent through the room. Today, it is more commonly used for aromatherapy through the use of essential oils.

All content from Kiddle encyclopedia articles (including the article images and facts) can be freely used under Attribution-ShareAlike license, unless stated otherwise. Cite this article:
Mentha Facts for Kids. Kiddle Encyclopedia.