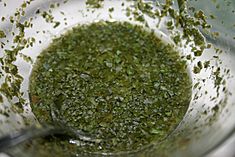 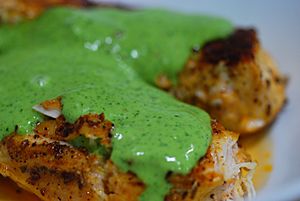 Mint sauce, in British and Irish cuisine, is a green sauce made from finely chopped spearmint (Mentha spicata) leaves soaked in vinegar, and a small amount of sugar. Lime juice is sometimes added. The sauce has the consistency of double cream. It is often served as a condiment for roast lamb, or any other roast meats, or, in some areas, mushy peas. It is normally bought ready-made, and is easy to find in British food shops. Mint jelly, thicker and sweeter, is an alternative for lamb, also normally bought ready-made.

Mint sauce can be used in some recipes in place of fresh mint. It can be eaten on toast or bread.

Mint chutney is a mint based sauce which is served with Indian snacks and breakfast items like Idly, Dhokla, etc. It is made with ground fresh mint leaves with a variety of ingredients like cilantro, green chili, lemon juice (in the northern parts of India) or tamarind (in southern India), salt, fried bengal gram and optionally curd.

Similar herb-based green sauces were common throughout Medieval Europe, with the use of mint being more common in French and Italian cuisine of the period than that of the English; however, they became less common and mostly died out as Europe entered the Modern Era.

In Tunisia a similar sauce is made out of dried mint and can be served with a méchoui, a mulukhiyah or as a base for a vinaigrette. Dried and fresh mint are also part of several dishes of Tunisian cuisine.

Mint sauces may include fruits in their preparation, such as raspberries.

All content from Kiddle encyclopedia articles (including the article images and facts) can be freely used under Attribution-ShareAlike license, unless stated otherwise. Cite this article:
Mint sauce Facts for Kids. Kiddle Encyclopedia.