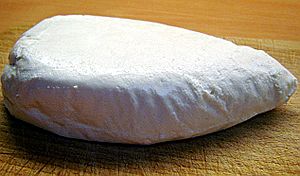 Curds are a dairy product obtained by coagulating milk in a process called curdling. The coagulation can be caused by adding rennet or any edible acidic substance such as lemon juice or vinegar, and then allowing it to sit. The increased acidity causes the milk proteins (casein) to tangle into solid masses, or curds.

Milk that has been left to sour (raw milk alone or pasteurized milk with added lactic acid bacteria) will also naturally produce curds, and sour milk cheeses are produced this way. Producing cheese curds is one of the first steps in cheesemaking; the curds are pressed and drained to varying amounts for different styles of cheese. The remaining liquid, which contains only whey proteins, is the whey. 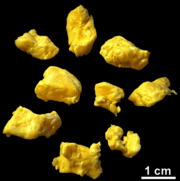 Curd products vary by region and include cottage cheese, curd cheese (both curdled by bacteria and sometimes also rennet), farmer cheese, pot cheese, queso blanco, and Indian paneer (milk curdled with lime juice). The word can also refer to a non-dairy substance of similar appearance or consistency, though in these cases a modifier or the word curdled is generally used.

In England, curds produced from the use of rennet are referred to as junket, with true curds and whey only occurring from the natural separation of milk due to its environment (temperature, acidity).

All content from Kiddle encyclopedia articles (including the article images and facts) can be freely used under Attribution-ShareAlike license, unless stated otherwise. Cite this article:
Curd Facts for Kids. Kiddle Encyclopedia.