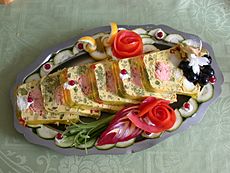 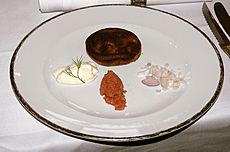 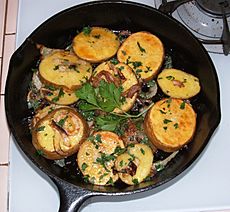 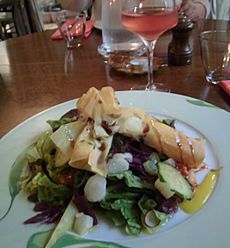 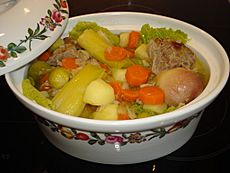 A pot-au-feu, the traditional French stew

French cuisine has influenced the style of cooking throughout Europe, and its chefs work in restaurants throughout the world.

The roots of modern haute cuisine lie in chefs like La Varenne (1615–1678) and the notable chef of Napoleon, Marie-Antoine Carême (1784–1833). These chefs developed a lighter style of food compared to the food of the Middle Ages. They used fewer spices, and more herbs and creamy ingredients.

Typical ingredients like roux and fish stock, and techniques such as marinading, and dishes such as ragout, were invented. Carême was an expert pâtissier (pastry-maker), and this is still a mark of French cooking. He developed basic sauces, his 'mother sauces'; he had over a hundred sauces in his repertoire, based on the half-dozen mother sauces.

French cuisine was introduced in the 20th century by Georges Auguste Escoffier (1846–1935). He was a genius at organisation. He worked out how to run large restaurants, as in a big hotel or a palace: how the staff should be organised; how the menu was prepared. He had methods for everything. Escoffier managed the restaurants and cuisine at the Savoy Hotel and Carlton Hotel in London, the Hôtel Ritz Paris, and some of the greatest cruise ships of the day.

Escoffier's other main contribution was the publication of Le Guide Culinaire in 1903, which spread the understanding of French cookery. However, Escoffier left out much of the culinary character to be found in the regions of France.

Gastro-tourism and the Guide Michelin helped to acquaint people with the rich bourgeois and peasant cuisine of the French countryside in the 20th century. Gascon cuisine has also had great influence over the cuisine in the southwest of France. Many dishes that were once regional have proliferated in variations across the country. Cheese and wine are a major part of the cuisine, playing different roles regionally and nationally. In the north of France, people often prefer to use butter to cook. In the south, they prefer olive oil and garlic. In France, each region has its own special dish; choucroute in Alsace, quiche in Lorraine, cassoulet in the Languedoc-Roussillon, and tapenade in Provence-Alpes-Côte d'Azur.

In November 2010, French gastronomy was added by UNESCO to its lists of the world's 'intangible cultural heritage'.

All content from Kiddle encyclopedia articles (including the article images and facts) can be freely used under Attribution-ShareAlike license, unless stated otherwise. Cite this article:
French cuisine Facts for Kids. Kiddle Encyclopedia.