The navy bean, haricot, pearl haricot bean, Boston bean, white pea bean, or pea bean is a variety of the common bean (Phaseolus vulgaris) native to the Americas, where it was first domesticated. It is a dry white bean that is smaller than many other types of white beans, and has an oval, slightly flattened shape. It features in such dishes as baked beans, various soups such as Senate bean soup, and even pies.

The green bean plants that produce navy beans may be either of the bush type or vining type, depending on which cultivar they are.

Other white beans include cannellini, 'Great Northern', the lima beans known as "butter beans", and the runner bean. 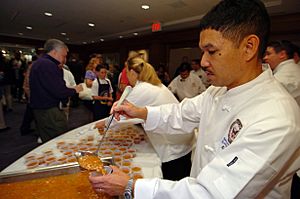 Navy beans being served at the Navy Memorial (2007)

The name "Navy bean" is an American term coined because the US Navy has served the beans as a staple to its sailors since the mid-1800s.

In Australia, navy bean production began during World War II when it became necessary to find an economical way of supplying a nutritious food to the many troops—especially American troops—based in Queensland. The United States military maintained a large base in Kingaroy and had many bases and camps throughout south-east Queensland. It actively encouraged the widespread planting of the beans. Kingaroy is known as the Baked Bean Capital of Australia. Another popular name for the bean during this time was "the Yankee bean".

Other white beans include:

Consumption of baked beans has been shown to lower total cholesterol levels and low-density lipoprotein cholesterol. This might be at least partly explained by high saponin content of navy bean. Saponins also exhibit antibacterial and anti-fungal activity, and have been found to inhibit cancer cell growth. Furthermore, navy bean is the richest source of ferulic acid and p-coumaric acid among the common bean varieties.

Dried and canned beans stay fresh longer by storing them in a pantry or other cool, dark place under 75 °F (24 °C). With normal seed storage, seeds should last from one to four years for replanting, with a very large timetable for cooking for well-kept seeds, nearing on indefinite. Avoid beans which are discolored from the pure white color of these beans, as they may have been poorly handled while they dried.

All content from Kiddle encyclopedia articles (including the article images and facts) can be freely used under Attribution-ShareAlike license, unless stated otherwise. Cite this article:
Navy bean Facts for Kids. Kiddle Encyclopedia.