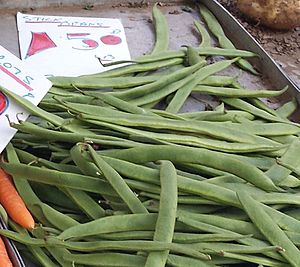 Fruit of the runner bean are commonly sold like this.

The runner bean (Phaseolus coccineus) is a kind of bean commonly grown in gardens. It is also known as scarlet runner bean or multiflora bean. It is part of the Fabaceae, which also contains other legumes. It may also be called butter bean, but that name can also be used for the Lima bean, which is a different species. The runner bean originally grew in South America. It was brought to Europe in the 17th century.

Runner beans are more resistant to cold than Great northern beans. For this reason, runner beans are commonly cultivated in Europe, also in higher altitudes. Today, the runner bean is either grown as an ornamental plants, or to get food. Usually, poles of a height of 4 metres (13 ft) to 5 metres (16 ft) are commonly used, when the plant is grown in the garden. Note also, that in Europe, runner beans die in winter, because they do not support the cold, for a prolonged period of time.

All content from Kiddle encyclopedia articles (including the article images and facts) can be freely used under Attribution-ShareAlike license, unless stated otherwise. Cite this article:
Runner bean Facts for Kids. Kiddle Encyclopedia.