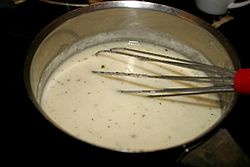 Roux is a cooking mixture of wheat flour and butter (or other fat). It is the basis of many types of French sauce for cooking.

Roux is the thickening agent of three of the mother sauces of classical French cuisine: sauce béchamel, sauce velouté and sauce espagnole. Clarified butter, vegetable oils, or lard are commonly used fats. It thickens gravy, other sauces, soups and stews. It is made from equal parts of flour and fat by weight.

All content from Kiddle encyclopedia articles (including the article images and facts) can be freely used under Attribution-ShareAlike license, unless stated otherwise. Cite this article:
Roux Facts for Kids. Kiddle Encyclopedia.