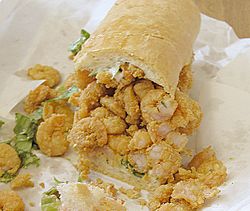 Po' boy sandwiches are associated with the cuisine of New Orleans. 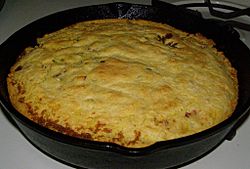 Cornbread is a staple Cajun starch.

Cajun cuisine (French: Cuisine cadienne), (Spanish: Cocina acadia) is a style of cooking developed by the Cajun–Acadians who were deported from Acadia to Louisiana during the 18th century and who incorporated West African, French and Spanish cooking techniques into their original cuisine.

Cajun cuisine is sometimes referred to as a 'rustic cuisine', meaning that it is based on locally available ingredients and that preparation is relatively simple.

An authentic Cajun meal is usually a three-pot affair, with one pot dedicated to the main dish, one dedicated to steamed rice, specially made sausages, or some seafood dish, and the third containing whatever vegetable is plentiful or available. Crawfish, shrimp, and andouille sausage are staple meats used in a variety of dishes.

The aromatic vegetables green bell pepper (piment doux), onion, and celery are called "the trinity" by Cajun chefs in Cajun and Louisiana Creole cuisines. Roughly diced and combined in cooking, the method is similar to the use of the mirepoix in traditional French cuisine which blends roughly diced carrot, onion, and celery. Characteristic aromatics for the Creole version may also include parsley, bay leaf, green onions, dried cayenne pepper, and dried black pepper.

The Acadians were a group of French colonists who were residing in modern-day Canada. In the mid-18th century, they were deported from Acadia by the British during the French and Indian War in what they termed le Grand Dérangement, and many of them ended up settling in Southern Louisiana.

Due to the extreme change in climate, Acadians were unable to cook their original dishes. Soon, their former culinary traditions were lost, and so, these other meals developed to become what is now considered classic Cajun cuisine traditions (not to be confused with the more modern concept associated with Prudhomme's style).

Up through the 20th century, the meals were not elaborate but instead, rather basic. The public's false perception of "Cajun" cuisine was based on Prudhomme's style of Cajun cooking, which was spicy, flavorful, and not true to the classic form of the cuisine.

Cajun and Creole cuisine have been mistaken to be the same, but the origins of Creole cooking began in New Orleans, and Cajun cooking came 40 years after the establishment of New Orleans. Today, most restaurants serve dishes that consist of Cajun styles, which Paul Prudhomme dubbed "Louisiana cooking". In home-cooking, these individual styles are still kept separate. However, there are fewer and fewer people cooking the classic Cajun dishes that would have been eaten by the original settlers.

The following is a partial list of ingredients used in Cajun cuisine and some of the staple ingredients of the Acadian food culture.

Cajun foodways include many ways of preserving meat, some of which are waning due to the availability of refrigeration and mass-produced meat at the grocer. Smoking of meats remains a fairly common practice, but once-common preparations such as turkey or duck confit (preserved in poultry fat, with spices) are now seen even by Acadians as quaint rarities.

Game (and hunting) are still uniformly popular in Acadiana.

The recent increase of catfish farming in the Mississippi Delta has brought about an increase in its usage in Cajun cuisine in the place of the more traditional wild-caught trout (the saltwater species).

Also included in the seafood mix are some so-called trash fish that would not sell at market because of their high bone to meat ratio or required complicated cooking methods. These were brought home by fishermen to feed the family. Examples are garfish, black drum also called gaspergou or just "goo", croaker, and bream.

Beef and dairy
Though parts of Acadiana are well suited to cattle or dairy farming, beef is not often used in a pre-processed or uniquely Cajun form. It is usually prepared fairly simply as chops, stews, or steaks, taking a cue from Texas to the west. Ground beef is used as is traditional throughout the US, although seasoned differently.

Dairy farming is not as prevalent as in the past, but there are still some farms in the business. There are no unique dairy items prepared in Cajun cuisine. Traditional Cajun and New Orleans Creole-influenced desserts are common. 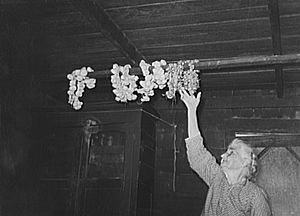 Cajun woman reaching for strings of garlic suspended from rafters. Near Crowley, Louisiana, 1938.

Thyme, sage, mint, marjoram, savory, and basil are considered sweet herbs. In Colonial times a herbes de Provence would be several sweet herbs tied up in a muslin.

Cajun seasonings consist of a blend of salt with a variety of spices, most common being cayenne pepper and garlic. The spicy heat comes from the cayenne pepper, while other flavors come from bell pepper, paprika, green onions, parsley and more.

Preparation of a dark roux is probably the most involved or complicated procedure in Cajun cuisine, involving heating fat and flour very carefully, constantly stirring for about 15–45 minutes (depending on the color of the desired product), until the mixture has darkened in color and developed a nutty flavor. The temperature should not be too high, as a burnt roux renders a dish unpalatable.

A light roux, on the other hand, is better suited for strictly seafood dishes and unsuitable for meat gumbos for the reason that it does not support the heavier meat flavor as well. Pairing roux with protein follows the same orthodox philosophy as pairing wine with protein.

Boudin that has been smoked 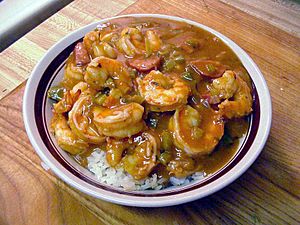 Boudin—a type of sausage made from pork, pork liver, rice, garlic, green onions and other spices. It is widely available by the link or pound from butcher shops. Boudin is typically stuffed in a natural casing and has a softer consistency than other, better-known sausage varieties. It is usually served with side dishes such as rice dressing, maque choux or bread. Boudin balls are commonly served in southern Louisiana restaurants and are made by taking the boudin out of the case and frying it in spherical form.

Gumbo—High on the list of favorites of Cajun cooking are the soups called gumbos. Contrary to non-Cajun or Continental beliefs, gumbo does not mean simply "everything in the pot". Gumbo exemplifies the influence of French, Spanish, African and Native American food cultures on Cajun cuisine.

The name originally meant okra, a word brought to the region from western Africa. Okra which can be a principal ingredient in gumbo recipes is used as a thickening agent and for its distinct vegetable flavor. Many claim that gumbo is a Cajun dish, but gumbo was established long before the Acadian arrival.

Its early existence came via the early French Creole culture In New Orleans, Louisiana, where French, Spanish and Africans frequented and also influenced by later waves of Italian, German and Irish settlers.

A filé gumbo is thickened with dried sassafras leaves after the stew has finished cooking, a practice borrowed from the Choctaw Indians.

The backbone of a gumbo is roux of which there are two variations: Cajun, a golden-brown roux, and Creole, a dark roux, which is made of flour, toasted until well-browned, and fat or oil.

The classic gumbo is made with chicken and the Cajun sausage called andouille, pronounced {ahn-doo-wee}, but the ingredients vary according to what is available.

Jambalaya—The only certain thing that can be said about jambalaya is that it contains rice, some sort of meat (such as chicken or beef), seafood (such as shrimp or crawfish) plus other items that may be available. Usually, it will include green peppers, onions, celery, tomatoes and hot chili peppers. This is also a great pre-Acadian dish, established by the Spanish in Louisiana.

Rice and gravy—Rice and gravy dishes are a staple of Cajun cuisine and is usually a brown gravy based on pan drippings, which are deglazed and simmered with extra seasonings and served over steamed or boiled rice.

The dish is traditionally made from cheaper cuts of meat and cooked in a cast-iron pot, typically for an extended time period in order to let the tough cuts of meat become tender. Beef, pork, chicken or any of a large variety of game meats are used for its preparation. Popular local varieties include hamburger steak, smothered rabbit, turkey necks, and chicken fricassee.

Food as an event 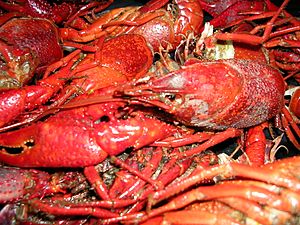 The crawfish boil is a celebratory event where Cajuns boil crawfish, potatoes, onions and corn in large pots over propane cookers. Lemons and small muslin bags containing a mixture of bay leaves, mustard seeds, cayenne pepper, and other spices, commonly known as "crab boil" or "crawfish boil" are added to the water for seasoning.

The results are then dumped onto large, newspaper-draped tables and in some areas covered in Creole/Cajun spice blends, such as REX, Zatarain's, Louisiana Fish Fry, or Tony Chachere's. Also, cocktail sauce, mayonnaise, and hot sauce are sometimes used. The seafood is scooped onto large trays or plates and eaten by hand.

During times when crawfish are not abundant, shrimp and crabs are prepared and served in the same manner.

Attendees are encouraged to "suck the head" of a crawfish by separating the head from the abdomen of the crustacean and sucking out the fat and juices from the head. 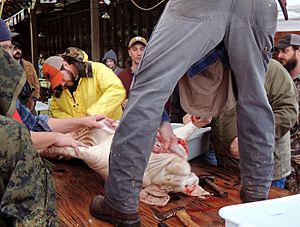 A traditional boucherie near Eunice, Louisiana

The traditional Cajun outdoor food event hosted by a farmer in the rural areas of the Acadiana. Family and friends of the farmer gather to socialize, play games, dance, drink, and have a copious meal consisting of hog and other dishes. Men have the task of slaughtering a hog, cutting it into usable parts, and cooking the main pork dishes while women have the task of making boudin.

Similar to a family boucherie, the cochon de lait is a food event that revolves around pork but does not need to be hosted by a farmer. Traditionally, a suckling pig was purchased for the event, but in modern cochon de laits, adult pigs are used.

Unlike the family boucherie, a hog is not butchered by the hosts and there are generally not as many guests or activities. The host and male guests have the task of roasting the pig while female guests bring side dishes.

The traditional Cajun Mardi Gras (see: Courir de Mardi Gras) is a Mardi Gras celebration in rural Cajun Parishes. The tradition originated in the 18th century with the Cajuns of Louisiana, but it was abandoned in the early 20th century because of unwelcome violence associated with the event. In the early 1950s the tradition was revived in Mamou in Evangeline Parish.

The event revolves around male maskers on horseback who ride into the countryside to collect food ingredients for the party later on. They entertain householders with Cajun music, dancing, and festive antics in return for the ingredients. The preferred ingredient is a live chicken in which the householder throws the chicken to allow the maskers to chase it down (symbolizing a hunt), but other ingredients include rice, sausage, vegetables, or frozen chicken.

Unlike other Cajun events, men take no part in cooking the main course for the party, and women prepare the chicken and ingredients for the gumbo. Once the festivities begin, the Cajun community members eat and dance to Cajun music until midnight after which is the beginning of Lent.

Other dishes and sides 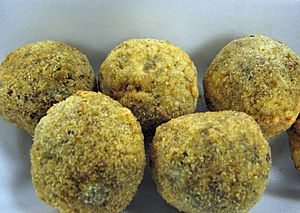 All content from Kiddle encyclopedia articles (including the article images and facts) can be freely used under Attribution-ShareAlike license, unless stated otherwise. Cite this article:
Cajun cuisine Facts for Kids. Kiddle Encyclopedia.