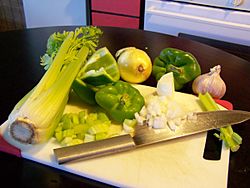 The holy trinity in Cajun cuisine and Louisiana Creole cuisine is the base for several dishes in the regional cuisines of Louisiana and consists of onions, bell peppers and celery. The preparation of Cajun/Creole dishes such as crawfish étouffée, gumbo, and jambalaya all start from this base.

Variants use garlic, parsley, or shallots in addition to the three trinity ingredients. The addition of garlic to the holy trinity is sometimes referred to as adding "the pope."

The name is an allusion to the Roman Catholic doctrine of the Trinity.

The term is first attested in 1981 and was probably popularized by Paul Prudhomme.

All content from Kiddle encyclopedia articles (including the article images and facts) can be freely used under Attribution-ShareAlike license, unless stated otherwise. Cite this article:
Holy trinity (cooking) Facts for Kids. Kiddle Encyclopedia.