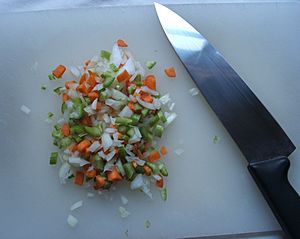 Mirepoix (pronounced /mɪər ˈpʍɑː/) is the French name for a condiment used for cooking. Mirepoix consists of onions, carrots and celery (either common Pascal celery or celeriac). Mirepoix is used in many dishes, such as stocks, soups, stews and sauces. It is used either raw, roasted or sautéed with butter. Mirepoix is known as the holy trinity of French cooking.

These three ingredients are commonly referred to as aromatics. Similar such combinations, both in and out of the French culinary repertoire, sometimes include leeks, parsnips, garlic, tomatoes, shallots, mushrooms, bell peppers, chilies, and ginger. For the combination mirepoix au gras, or a Matignon, ham or pork belly are used as additional ingredients. In Cajun cuisine, a mirepoix or trinity is a combination of onions, celery and bell peppers.

They may be used in different combinations, as dictated by the cuisine and the dish itself.

Traditionally, the ratio for mirepoix is 2:1:1 of onions, celery, and carrots. The ratio for bones to mirepoix for stock is 10:1. When making a white stock, or fond blanc, parsnips are used instead of carrots to maintain the pale color.

Mirepoix derives its name, as many other elements of French cuisine do, from the patron of the chef who established it, in this case one of the house of Lévis, seigneurs of Mirepoix since the eleventh century and a famous name in Languedoc. The particular member of the house of Lévis whose chef is credited by the Dictionnaire de l'Académie française with giving a name to an old technique is Charles-Pierre-Gaston François de Lévis, duc de Lévis-Mirepoix (1699-1757), maréchal de France and ambassador of Louis XV.

All content from Kiddle encyclopedia articles (including the article images and facts) can be freely used under Attribution-ShareAlike license, unless stated otherwise. Cite this article:
Mirepoix (cuisine) Facts for Kids. Kiddle Encyclopedia.