The carrot (Daucus carota subsp. sativus) is a root vegetable, usually orange in colour, though purple, black, red, white, and yellow varieties exist. Carrots are a domesticated form of the wild carrot, Daucus carota, native to Europe and southwestern Asia. The plant probably originated in Persia and originally cultivated for its leaves and seeds. The most commonly eaten part of the plant is the taproot, although the greens are sometimes eaten as well. The domestic carrot has been selectively bred for its greatly enlarged, more palatable, less woody-textured taproot.

The carrot is a biennial plant in the umbellifer family Apiaceae. At first, it grows a rosette of leaves while building up the enlarged taproot. Fast-growing varieties mature within three months (90 days) of sowing the seed, while slower-maturing varieties are harvested four months later (120 days). The roots contain high quantities of alpha- and beta-carotene, and are a good source of vitamin K and vitamin B6, but the belief that eating carrots improves night vision is a myth put forward by the British in World War II to mislead the enemy about their military capabilities.

The United Nations Food and Agriculture Organization (FAO) reports that world production of carrots and turnips (these plants are combined by the FAO) for the calendar year 2013 was 37.2 million tonnes; almost half (~45%) were grown in China. Carrots are widely used in many cuisines, especially in the preparation of salads, and carrot salads are a tradition in many regional cuisines.

The word is first recorded in English circa 1530 and was borrowed from Middle French carotte, itself from Late Latin carōta, from Greek καρωτόνor karōton, originally from the Indo-European root *ker- (horn), due to its horn-like shape. In Old English, carrots (typically white at the time) were not clearly distinguished from parsnips: the two were collectively called moru or more (from Proto-Indo-European *mork- "edible root", cf. German Möhre).

Various languages still use the same word for "carrot" as they do for "root"; e.g. Dutch wortel.

Molecular and genetic studies, along with written history, support the idea that the cultivated/domesticated carrot has a single origin in Central Asia. The wild ancestors of the carrot are likely to have originated in Persia (regions of which are now Iran and Afghanistan), which remains the centre of diversity for Daucus carota, the wild carrot. A naturally occurring subspecies of the wild carrot was presumably bred selectively over the centuries to reduce bitterness, increase sweetness and minimise the woody core; this process produced the familiar garden vegetable. 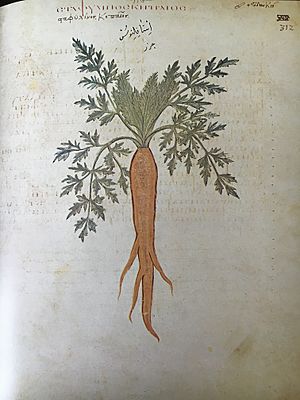 A depiction labeled "garden" carrot from the Juliana Anicia Codex, a copy, written in Constantinople in 515 AD, of Dioscorides' 1st century AD Greek work. The facing page states that "the root can be cooked and eaten."

When they were first cultivated, carrots were grown for their aromatic leaves and seeds rather than their roots. Carrot seeds have been found in Switzerland and Southern Germany dating back to 2000–3000 BC. Some close relatives of the carrot are still grown for their leaves and seeds, for example: parsley, cilantro/coriander, fennel, dill and cumin. The first mention of the root in classical sources is during the 1st century, and the carrot may have been eaten as a root vegetable by the Romans, although there is some ambiguity about this, as they used the word pastinaca for both carrots and parsnips, part of the same family.

The plant is depicted and described in the late Roman Juliana Anicia Codex, a copy, made in 515 in Constantinople, of the Greek physician Dioscorides' 1st century AD pharmacopoeia of herbs and medicines, De Materia Medica. Three different types of carrots are depicted, and the Greek text states of them that "the root can be cooked and eaten." 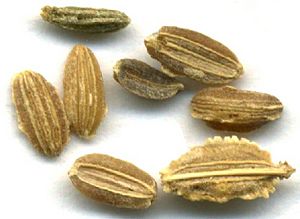 The plant appears to have been introduced into Spain by the Moors in the 8th century. In the 10th century, in wordwide locations like West Asia, India and Europe, the roots were purple. The modern carrot originated in Afghanistan at about this time. The Jewish scholar Simeon Seth describes both red and yellow carrots in the 11th century. The 12th-century Arab-Andalusian agriculturist, Ibn al-'Awwam, also mentions roots of these colours; Cultivated carrots appeared in China in the 14th century, and in Japan in the 18th century. Orange-coloured carrots appeared in the Netherlands in the 17th century, which has been related to the fact that the Dutch flag at the time, the Prince's Flag, included orange. These, the modern carrots, were intended by the English antiquary John Aubrey (1626–1697) when he noted in his memoranda, "Carrots were first sown at Beckington in Somersetshire. Some very old Man there [in 1668] did remember their first bringing hither." European settlers introduced the carrot to colonial America in the 17th century.

Outwardly purple carrots, still orange on the inside, were sold in British stores beginning in 2002. 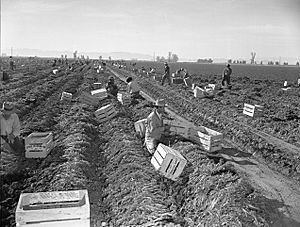 Carrots are grown from seed and can take up to four months (120 days) to mature, but most varieties mature within 70 to 80 days under the right conditions. They grow best in full sun but tolerate some shade. The optimum temperature is 16 to 21 °C (61 to 70 °F). The ideal soil is deep, loose and well-drained, sandy or loamy, with a pH of 6.3 to 6.8. Fertilizer should be applied according to soil type because the crop requires low levels of nitrogen, moderate phosphate and high potash. Rich or rocky soils should be avoided, as these will cause the roots to become hairy and/or misshapen. Irrigation is applied when needed to keep the soil moist. After sprouting, the crop is eventually thinned to a spacing of 8 to 10 cm (3 to 4 in) and weeded to prevent competition beneath the soil.

Carrots benefit from strongly scented companion plants. The pungent odour of onions, leeks and chives help repel the carrot root fly, and other vegetables that team well with carrots include lettuce, tomatoes and radishes, as well as the herbs rosemary and sage. Carrots thrive in the presence of caraway, coriander, chamomile, marigold and Swan River daisy. They can also be good companions for other plants; if left to flower, the carrot, like any umbellifer, attracts predatory wasps that kill many garden pests.

Carrots can be eaten in a variety of ways. Only 3 percent of the β-carotene in raw carrots is released during digestion: this can be improved to 39% by pulping, cooking and adding cooking oil. Alternatively they may be chopped and boiled, fried or steamed, and cooked in soups and stews, as well as baby and pet foods. A well-known dish is carrots julienne. Together with onion and celery, carrots are one of the primary vegetables used in a mirepoix to make various broths.

The sweetness of carrots allows the vegetable to be used in some fruit-like roles. Grated carrots are used in carrot cakes, as well as carrot puddings, an English dish thought to have originated in the early 19th century. Carrots can also be used alone or blended with fruits in jams and preserves. Carrot juice is also widely marketed, especially as a health drink, either stand-alone or blended with juices extracted from fruits and other vegetables.

Highly excessive consumption over a period of time results in a condition of carotenemia which is a yellowing of the skin caused by a build up of carotenoids.

The provitamin A beta-carotene from carrots does not actually help people to see in the dark unless they suffer from a deficiency of vitamin A. This myth was propaganda used by the Royal Air Force during the Second World War to explain why their pilots had improved success during night air battles, but was actually used to disguise advances in radar technology and the use of red lights on instrument panels. Nevertheless, the consumption of carrots was advocated in Britain at the time as part of a Dig for Victory campaign. A radio programme called The Kitchen Front encouraged people to grow, store and use carrots in various novel ways, including making carrot jam and Woolton pie, named after the Lord Woolton, the Minister for Food.

All content from Kiddle encyclopedia articles (including the article images and facts) can be freely used under Attribution-ShareAlike license, unless stated otherwise. Cite this article:
Carrot Facts for Kids. Kiddle Encyclopedia.