Fennel is a kind of herb. It is native to the Mediterranean and some parts of Asia. Its bulb, leaves, and seeds may be eaten. Dried fennel seeds are used as a spice for flavoring food. Fennel was used to make the spiced wine, claret, in the Middle Ages. Their flavor is like anise.

Fennel, Foeniculum vulgare, is a perennial herb. It is erect, glaucous green, and grows to heights of up to 2.5 m, with hollow stems. The leaves grow up to 40 cm long; they are finely dissected, with the ultimate segments filiform (threadlike), about 0.5 mm wide. (Its leaves are similar to those of dill, but thinner.) The flowers are produced in terminal compound umbels 5–15 cm wide, each umbel section having 20–50 tiny yellow flowers on short pedicels. The fruit is a dry seed from 4–10 mm long, half as wide or less, and grooved. 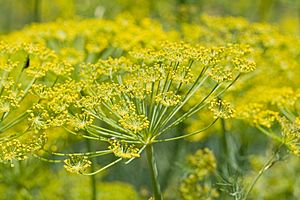 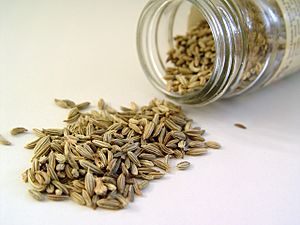 Fennel is widely cultivated, both in its native range and elsewhere, for its edible, strongly flavored leaves and fruits. Its aniseed flavor comes from anethole, an aromatic compound also found in anise and star anise, and its taste and aroma are similar to theirs, though usually not as strong.

Florence fennel (Foeniculum vulgare Azoricum Group; syn. F. vulgare var. azoricum) is a cultivar group with inflated leaf bases which form a bulb-like structure. It is of cultivated origin, and has a mild anise-like flavor, but is sweeter and more aromatic. Florence fennel plants are smaller than the wild type. The inflated leaf bases are eaten as a vegetable, both raw and cooked. Several cultivars of Florence fennel are also known by several other names, notably the Italian name finocchio. In North American supermarkets, it is often mislabeled as "anise".

Fennel has become naturalized along roadsides, in pastures, and in other open sites in many regions, including northern Europe, the United States, southern Canada, and much of Asia and Australia. It propagates well by seed, and is considered an invasive species and a weed in Australia and the United States. In western North America, fennel can be found from the coastal and inland wildland-urban interface east into hill and mountain areas, excluding desert habitats. 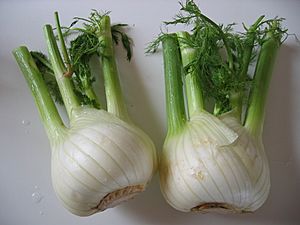 Florence fennel is one of the three main herbs used in the preparation of absinthe, an alcoholic mixture which originated as a medicinal elixir in Switzerland and became, by the late 19th century, a popular alcoholic drink in France and other countries.

All content from Kiddle encyclopedia articles (including the article images and facts) can be freely used under Attribution-ShareAlike license, unless stated otherwise. Cite this article:
Fennel Facts for Kids. Kiddle Encyclopedia.