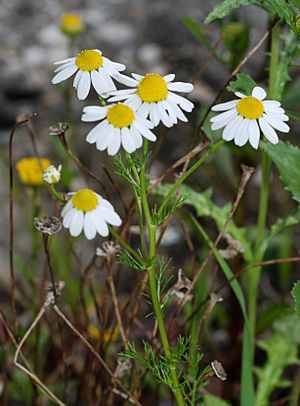 Chamomile or camomile ( KAM-ə-myl or KAM-ə-meel) is the common name for several daisy-like plants of the family Asteraceae that are commonly used to make herb infusions to serve various medicinal purposes. Popular uses of chamomile preparations include treating hay fever, inflammation, muscle spasms, menstrual disorders, insomnia, ulcers, gastrointestinal disorders, and haemorrhoids. Camomile tea is also used to treat skin conditions such as eczema, chickenpox and psoriasis. It is the national flower of Russia. 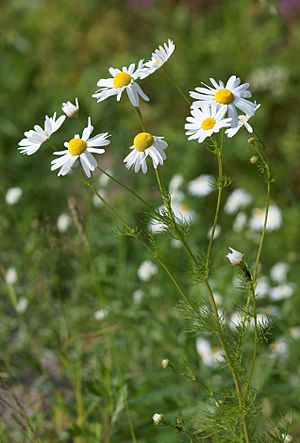 Chamomile 'tea' is an herbal infusion made from dried chamomile flowers and hot water, though does not contain black, green, yellow or white tea (Camellia sinensis). There are two main types of chamomile that are used to produce the infusion; German chamomile (Matricaria recutita) and Roman chamomile (Chamaemelum nobile). Chamomile 'tea' is said to be a digestive relaxant. 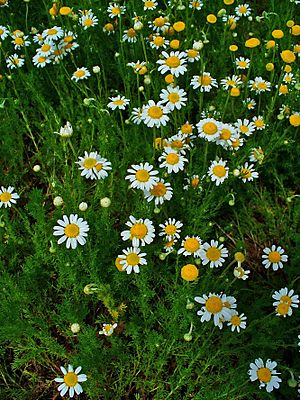 German Chamomile has been used for treatment of inflammation associated with hemorrhoids when topically applied. There is level B evidence that German chamomile possesses anti-anxiety properties and could be used to treat stress and insomnia.

Chamomile is frequently added to skin cosmetics to serve as an emollient, and for its anti-inflammatory effects. Chamomile is also often used to enhance the color of blonde hair. 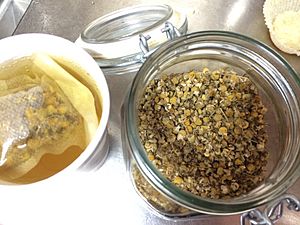 German chamomile oil is used as a diffuser for aromatherapy benefits; and is also used to treat wounds and be blended with other essential oils such as lavender and rose.

All content from Kiddle encyclopedia articles (including the article images and facts) can be freely used under Attribution-ShareAlike license, unless stated otherwise. Cite this article:
Chamomile Facts for Kids. Kiddle Encyclopedia.