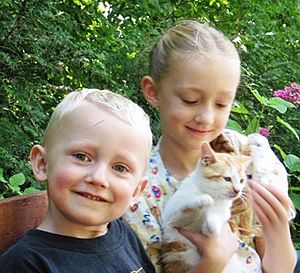 A blonde person is someone with light coloured hair. It can be spelled either blonde or blond, according to Merriam-Webster's Dictionary. Some people are blonde because they have less pigment in their hair than dark haired people. To be blonde is usually to have blonde ancestors. Then it is genetic - blondes have genes that make them blond. Sometimes it is not genetic - this is called albinism. People can also use chemicals to make themselves blonde. Bleach is sometimes used to make the color of a person's hair lighter.

Most people are not blondes by their genes. Only some people, mostly with European ancestry, are blondes by their genes, and also some Aboriginal Australianss have a different gene that makes them blonde. Natural blondes are most common around the Baltic Sea, especially the Nordic countries such as Sweden, Norway, Denmark, Iceland, and Finland and Ireland also has a number of natural blondes. According to recent genetic analysis, both mtDNA and Y chromosome exist in Austrians. There is also a large number of blondes in Baltic countries, Slavic countries (especially Poland), northwestern parts of Russia and among European descent that have lived in Kazakhstan since the Soviet Union. Natural blondes are also common in Canada, United States, Australia, New Zealand, Argentina, Chile, United Kingdom, and Germany. Light hair can also brought on by environmental factors, especially exposure to sunlight. 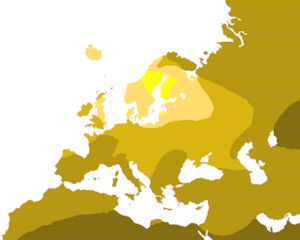 Anthropologist Peter Frost's map of blonde hair. In the lightest yellow area, blonde hair is the most common (80 per cent or more of the native population). The darker the colour, the fewer blondes. In the darkest area, there are almost no native blondes.

All content from Kiddle encyclopedia articles (including the article images and facts) can be freely used under Attribution-ShareAlike license, unless stated otherwise. Cite this article:
Blonde Facts for Kids. Kiddle Encyclopedia.