Canton is a historic waterfront neighborhood in Baltimore, Maryland, United States. The neighborhood is along Baltimore's outer harbor in the southeastern section of the city, roughly two miles east of Baltimore's downtown district and next to or near the neighborhoods of Patterson Park, Fell's Point, Highlandtown, and Brewers Hill.

Canton is considered one of Baltimore's trendiest and vibrant neighborhoods, known for its family-friendly community, urban lifestyle and hot spot for the social scene. The inclusive neighborhood continues to see rapid growth as more development opportunities come into the area. Since the late 1990s, the neighborhood has undergone significant gentrification and has been ranked the 16th most-gentrified zip code in the nation from 2000 to 2016.

In 1785, Irish merchant John O'Donnell settled in Baltimore and began trading with merchants in the Chinese port of Guangzhou, then called Canton by English speakers. When O'Donnell purchased land, he named his plantation Canton. In the Late 18th century, O'Donnell's land was sold off by his son Columbus O’Donnell, William Patterson and Peter Cooper, and was developed for waterfront industry and blue-collar housing.

During the early 19th century, European immigrants settled in the area. Welsh immigrants, primarily workers from South Wales, began settling in Baltimore in large numbers beginning in the 1820s. Welsh and Irish migrant workers composed a large portion of Baltimore's working class during the early and mid-1800s. In 1850, a large community of copper workers from Wales settled in the neighborhood. These workers established a Presbyterian church in 1865, located on Toone Street in Canton. Other groups included German and Poles.

In the 2000s, as industry moved out, new housing and marinas have been developed along the waterfront and gentrification of the existing housing has occurred further inland. 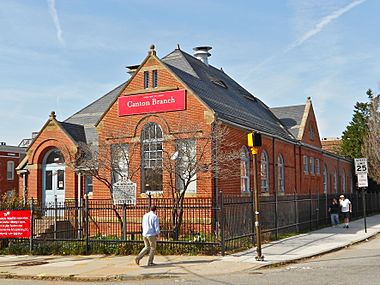 The first branch of the Enoch Pratt Free Library, in operation since 1866, is in Canton on O’Donnell Square.

Bus transportation to New York City and Washington, D.C. is available with frequent service at a nearby Eastern Bus stop on Ponca Street.

All content from Kiddle encyclopedia articles (including the article images and facts) can be freely used under Attribution-ShareAlike license, unless stated otherwise. Cite this article:
Canton, Baltimore Facts for Kids. Kiddle Encyclopedia.