Fell's Point is a historic waterfront neighborhood in southeastern Baltimore, Maryland, United States. It was established around 1763 and is located along the north shore of the Baltimore Harbor and the Northwest Branch of the Patapsco River. The area has many antique, music and other stores, restaurants, coffee bars, a municipal markethouse with individual stalls, and over 120 pubs. Located 1.5 miles east of Baltimore's downtown central business district and the Jones Falls stream (which splits the city, running from northern Baltimore County), Fells Point has a maritime past and the air of a seafaring town. It also has the greatest concentration of drinking establishments and restaurants in the city.

The neighborhood has also been historically the home of large immigrant populations of Irish, Germans, Jews, Poles and other Eastern European nationalities such as Ukrainians, Russians, Czechs, and Slovaks, throughout its 250-year-old history. Since the 1970s, a steadily increasing number of middle- to upper-middle-income residents has moved into the area, restoring and preserving historic homes and businesses. Upper Fell's Point to the north along Broadway has gained a sizable Latino population, primarily from waves of Mexican and Central American immigrants since the 1980s, and is sometimes now called "Spanish Town".

This Fells Point waterfront is an upscale residential area and tourist destination featuring first rate hotels and restaurants. It can be reached by water taxi barges, on foot as it is a very short walk form the Inner Harbor, and by bus or car. Fells Point is one of several areas in and around Baltimore that are listed on the National Register of Historic Places, (maintained by the National Park Service), the first designated from Maryland, and is one of the first registered historic districts in the United States to combine two separate waterfront communities (along with Federal Hill to the southwest across the Patapsco River and the Harbor on the "Old South Baltimore" peninsula of "Whetstone Point" at Fort McHenry). 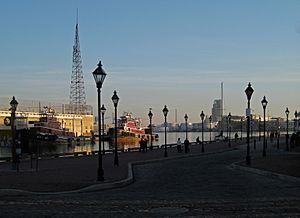 The waterfront of the Northwest Branch of the Patapsco River, the old "Basin", at Fells Point

First described by a European seafarer as "Long Island Point" in 1670, the area later to be known as Fell's Point was a thin little peninsula jutting out southwestward between the streams of Jones Falls and Harford Run (later covered over by Central Avenue) to the west and Harris Creek to the east (now culverted beneath the community of Canton) and further east to Colgate Creek (now surrounded by the Dundalk and Sea Girt Marine Terminals). Later land was patented with the title of "Copus Harbor". Nearby Baltimore Town to the west at the headwater of the Patapsco River's Northwest Branch was land patented under the name of "Cole's Harbor" and "Todd's Range" to William Cole and later sold to Charles and Daniel Carroll. This area was later established as a "port of entry" by the General Assembly of the Province of Maryland in 1706. After several local farmers and plantation owners originally planning to establish a town on the northeastern shores of the Middle Branch of the Patapsco (also known as "Ridgeley's Cove") were stymied by the objections of local owner William Moale, who thought the land was too valuable as a site of iron ore deposits. So the new town site was moved further to the northeast to the head of the Northwest Branch. Established as a town by the authority of the Colonial Assembly on July 30, 1729, (and signed by Governor Benedict Leonard Calvert on August 8), several streets were laid out in the "Original Survey" of January 12, 1730, with the main one going east-to-west called "Long Street" (later by 1760's as "Market Street", then renamed East and West Baltimore Streets) and several others intersecting from north-to-south such as Forrest (later Charles), Calvert, running north from "The Basin" (today's Inner Harbor) in 1730.

Joined in 1732, to the northeast along the banks of the stream "Jones Falls" (which originates in northern Baltimore County near the Pennsylvania border) by the laying out of several streets on a northwest to southeast angle by David Jones and named "Jones's Town" with streets such as Front, High, and Low. Founded by William Fell, who was attracted by its beautiful, deep water and proximity to agriculture and thick forests, Fell's Point became a shipbuilding and commercial center. About 1763, William's son Edward Fell laid out streets and began selling plots for homes. The town grew quickly, and eventually incorporated with Baltimore Town and Jones Town in 1773 to form a new Town of Baltimore and later in 1797 becoming the City of Baltimore. The area grew wealthy on the tobacco, flour, and coffee trades through the 18th and 19th centuries.

Some of the first vessels commissioned for the U.S. Navy were built in Fell's Point shipyards, including the "U.S.F. Constellation" in 1797. However, the area became best known for producing topsail schooners, sometimes erroneously called "Baltimore clippers", renowned for their great speed and handling. They were excellent blockade runners, and were frequently used as armed privateers. The "Pride of Baltimore II" is based on the "Chasseur", built by Thomas Kemp, which was one of the most successful privateers built in Fell's Point during the War of 1812. 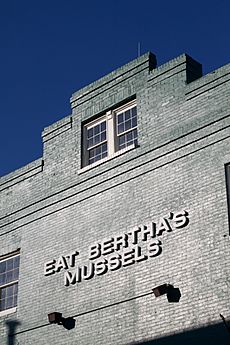 During the War of 1812, Fell's Point's yards built and supported dozens of privateers which preyed on British shipping vessels. Consequently, Baltimore became a principal target of the British during the war, referred to as a "nest of pirates", which eventually led to the attack on the city and the bombardment of Fort McHenry in September 1814.

Another growth industry in Fell's Point was immigration, and it became a major point of entry into the United States. Since jobs were plentiful in shipbuilding and in the warehouses and factories, many of the immigrants stayed in Fell's Point. This added to the multicultural fabric of the area, but also caused the more affluent to move into other parts of the city.

In 1835, Frederick Douglass, while still enslaved, was hired out to a shipbuilder on Fell's Point. In his memoir, Narrative of the Life of Frederick Douglass, an American Slave, Douglass recounts that, years earlier, the first time he had been sent to Baltimore, the Fell's Point neighborhood was where he taught himself to read and write, copying the letters with which the men in the shipyard labeled boards and "making friends of all the little white boys whom I met in the street. As many of these as I could, I converted into teachers."

Fell's Point remained a shipbuilding center until the Civil War, when it could no longer handle the larger ships (also with steam power) then coming into use. Likewise, the shipping industry slowly moved away to larger facilities, some of the newer shipyards further downriver, and the area became a manufacturing center, with innovations in canning, along with nearby Canton to the east. and packing. The neighborhood escaped serious damage during the Baltimore Fire of 1904, which destroyed the downtown financial area further west. Eventually, much of the manufacturing left the city by the 1980s, resulting in urban decay until preservationists organized to save the area's historic buildings.

In 1965, city, state and some federal transit planners proposed to link Interstate 83 (Jones Falls Expressway going north from downtown since 1962) and Interstate 95, (the main East Coast, Maine to Florida super-highway) by building an elevated highway along the north shore of the Baltimore Harbor. This project would have entailed extensive demolition within Fell's Point, and across the river in Federal Hill/South Baltimore and the highway would have cut off the remainder of the neighborhood from the waterfront. A "expressway revolt" against the proposals was raised by local residents and derailed the project. Fell's Point's addition to the National Register of Historic Places prevented the use of federal funds for the road project, and contributed to the project's cancellation. One of the leaders of the revolt was social worker Barbara Mikulski, who was later elected a City Council member and later a U.S. Representative followed by as a U.S. Senator from Maryland, one of the first women elected and by 2014, one of the longest serving.

Fell's Point achieved some fame as the central setting for the 1990s NBC TV network police drama Homicide: Life on the Street, (based on the book Homicide: A Year on the Killing Streets by David Simon of the Baltimore Sun) and has been the site of many films shot in Baltimore.

Fell's Point, located to the east of the Inner Harbor, suffered extensive flooding during Hurricane Isabel in September 2003, with water as high as 10 feet. 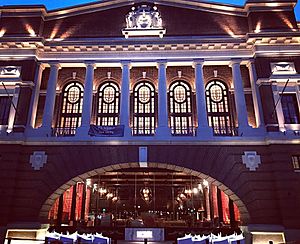 Fell's Point includes a diversity of historic architecture. Flemish bond brick is used in some of the earliest homes, while row housing is prominent in eighteenth and early twentieth century construction. Gabled roof buildings and Victorian homes are also interspersed with other housing and use types.

In 2012, Fell's Point was selected by the American Planning Association (APA) as one of the Great Places in America (neighborhood category), which "celebrates places of exemplary character, quality, and planning". 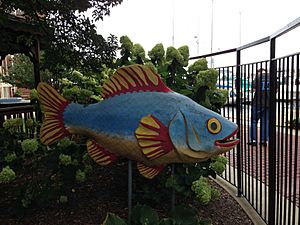 Fell's Point Fun Festival started in 1966 in response to the proposed I-95 freeway that was to run through the neighborhood. The original purpose of the festival was to raise money to help save Fell's Point and to raise awareness of the historical significance of the neighborhood and its plight. The weekend-long Fun Festival, celebrated in October, has an estimated attendance of over 700,000. The event includes entertainment, arts and crafts vendors, and cultural and culinary offerings.

Halloween in Fell's Point occurs annually on October 31 celebrating Halloween. The informal gathering takes place in and around Broadway Square and Thames Street. As the evening goes on, hundreds of individuals come dressed in costume and participate in taking photos, trick-or-treating, and pub crawling.

All content from Kiddle encyclopedia articles (including the article images and facts) can be freely used under Attribution-ShareAlike license, unless stated otherwise. Cite this article:
Fell's Point, Baltimore Facts for Kids. Kiddle Encyclopedia.