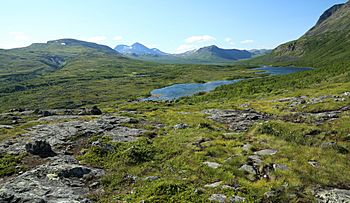 Børvasstindene in Norway, near Bodø

A fell (from Old Norse fell, fjall, "mountain") is a high and barren landscape feature, such as a mountain range or moor-covered hills. The term is most often employed in Scandinavia, the Isle of Man, parts of northern England, and Scotland.

The English word fell comes from Old Norse fell, fjall (both forms existed). It is from the same root word as the Icelandic fjall/fell. Also the Swedish fjäll, and Norwegian fjell. These all refer to mountains rising above the alpine tree line. 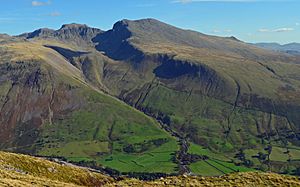 View of the Scafell massif from Yewbarrow, Wasdale, Cumbria. In the valley are older enclosures and higher up on the fell-side are the parliamentary enclosures following straight lines regardless of terrain.

Names that originally referred to grazing areas have been applied to these hilltops. This is the case with Seathwaite Fell, for example, which would be the common grazing land used by the farmers of Seathwaite. The fellgate marks the road from a settlement onto the fell (see photograph for example), as is the case with the Seathwaite Fell. In other cases the reverse is true; for instance, the name of Wetherlam, in the Coniston Fells, though understood to refer to the mountain as a whole, strictly speaking refers to the summit; the slopes have names such as Tilberthwaite High Fell, Low Fell and Above Beck Fells. 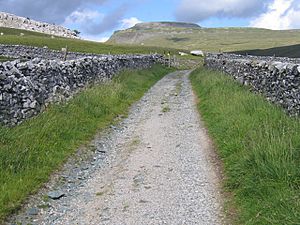 Fell Lane, near Ingleton towards the fellgate and Ingleborough, North Yorkshire, England

The word "fell" is also used in the names of various breeds of livestock, bred for life on the uplands, such as Rough Fell sheep, Fell Terriers and Fell ponies.

It is also found in many place names across the North of England, often attached to the name of a community; thus the township of Cartmel Fell.

In northern England, there is a Lord of the Fells – this ancient aristocratic title being associated with the Lords of Bowland.

Groups of cairns are a common feature on many fells, often marking the summit – there are fine examples on Wild Boar Fell in Mallerstang Dale, Cumbria, and on Nine Standards Rigg just outside Kirkby Stephen, Cumbria.

As the most mountainous region of England, the Lake District is the area most closely associated with the sport of fell running, which takes its name from the fells of the district. "Fellwalking" is also the term used locally for the activity known in the rest of Great Britain as hillwalking.

The word "fell" also enjoys limited use in Scotland, with for example the Campsie Fells in Central Scotland, to the North East of Glasgow. One of the most famous examples of the use of the word "fell" in Scotland is Goat Fell, the highest point on the Isle of Arran. Criffel and the nearby Long Fell in Galloway may be seen from the northern Lake District of England. Peel Fell in the Kielder Forest is situated on the border between the Scottish Borders to the North and the English county of Northumberland to the South.

In Norway, fjell, in common usage, is generally interpreted as simply a summit of greater altitude than a hill, which leads to a great deal of local variation in what is defined as a 'fjell'. Professor of geography at the University of Bergen, Anders Lundeberg, has summed up the problem by stating that "There simply is no fixed and unambiguous definition of 'fjell'." Ivar Aasen defined fjell as a "tall berg", primarily referring to a berg that reaches an altitude where trees don't grow, lower berg are referred to as "berg", "ås" (hill, ridge) or "hei" (moor, heathland). The fixed expression til fjells refers to mountains (or uplands) as a collective rather than a specific location or specific summit. According to Ivar Aasen berg refers to cliffs, bedrock and notable elevations of the surface underpinned by bedrock; berg also refers to the substance of bedrock. For all practical purposes, 'fjell' can be translated as 'mountain' and the Norwegian language has no other commonly used word for mountain.

In Finnish, the mountains characteristic of the region of Lapland are called tunturi (plural: tunturit). In Finnish, the geographical term vuori is used for mountains recently uplifted and with jagged terrain featuring permanent glaciers, while tunturi refers to the old, highly eroded, gently shaped terrain without glaciers, as found in Finland. (Also, tunturi is used to refer to treeless plains at high altitudes in far north regions, as well.) They are round inselbergs rising from the otherwise flat surroundings. The mountains in Finnish Lapland reach heights of up to 400 and 800 metres, where the upper reaches are above the tree line. Those that do not reach the tree line, on the other hand, are mostly referred to as vaara. The mountains in Finnish Lapland form vestiges of the Karelides mountains, formed two billion years ago. The term tunturi, originally a word limited to Far-Northern dialects of Finnish and Karelian, is a loan from Sami, compare Proto-Sami *tuontër, South Sami doedtere, Northern Sami duottar, Inari Sami tuodâr "uplands, mountains, tundra", Kildin Sami tūndâr, which means "uplands, treeless mountain tract" and is cognate with Finnish tanner "hard ground". From this Sami word, the word tundra is borrowed, as well, through the Russian language.

All content from Kiddle encyclopedia articles (including the article images and facts) can be freely used under Attribution-ShareAlike license, unless stated otherwise. Cite this article:
Fell Facts for Kids. Kiddle Encyclopedia.