Cumbria ( KUM-bree-ə; locally KUUM-bree-ə) is a non-metropolitan county in North West England. The county and Cumbria County Council, its local government, came into existence in 1974 after the passage of the Local Government Act 1972. Cumbria's county town is Carlisle, in the north of the county, and the only other major urban area is Barrow-in-Furness on the southwestern tip of the county.

The county of Cumbria consists of six districts (Allerdale, Barrow-in-Furness, Carlisle, Copeland, Eden and South Lakeland), and in 2008 had a population of just under half a million. Cumbria is one of the most sparsely populated counties in the United Kingdom, with 73.4 people per km2 (190/sq mi).

Cumbria is the third largest county in England by area, and is bounded to the north by the Scottish council areas of Dumfries and Galloway and Scottish Borders, to the west by the Irish Sea, to the south by Lancashire, to the southeast by North Yorkshire, and to the east by County Durham and Northumberland.

Cumbria is predominantly rural and contains the Lake District and Lake District National Park, considered one of England's most outstanding areas of natural beauty, serving as inspiration for artists, writers, and musicians. A large area of the south east of the county is within the Yorkshire Dales National Park while the east of the county fringes the North Pennines AONB. Much of Cumbria is mountainous, and it contains every peak in England over 3,000 feet (910 m) above sea level, with Scafell Pike at 3,209 feet (978 m) being the highest point of England. An upland, coastal, and rural area, Cumbria's history is characterised by invasions, migration, and settlement, as well as battles and skirmishes between the English and the Scots. Notable historic sites in Cumbria include Carlisle Castle, Furness Abbey, Hardknott Roman Fort, Brough Castle and Hadrian's Wall, a UNESCO World Heritage Site. 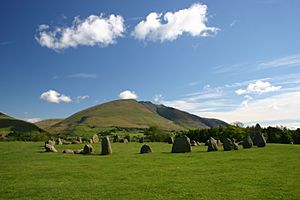 The county of Cumbria was created in April 1974 through an amalgamation of the previous counties of Cumberland and Westmorland and small parts of Lancashire (the part known as Lancashire over the sands) and West Riding of Yorkshire, which was also abolished at that time.

At the end of the period of British history known as Roman Britain (c. A.D. 410) the inhabitants of Cumberland were Cumbric-speaking native Romano-Britons who were probably descendants of the Brigantes and Carvetii (sometimes considered to be a sub-tribe of the Brigantes) that the Roman Empire had conquered in about A.D. 85. Based on inscriptional evidence from the area, the Roman civitas of the Carvetii seems to have covered portions of Cumbria. The names Cumbria, Cymru (the native Welsh name for Wales), Cambria, and Cumberland are derived from the name these people gave themselves, *kombroges in Common Brittonic, which originally meant "compatriots".

In the Early Middle Ages, Cumberland formed the core of the Brittonic kingdom of Rheged. For the rest of the first millennium, Cumbria was contested by several entities who warred over the area, including the Brythonic Kingdom of Strathclyde and the Anglian kingdom of Northumbria. Most of modern-day Cumbria was a principality in the Kingdom of Scotland at the time of the Norman conquest of England in 1066 and thus was excluded from the Domesday Book survey of 1086. In 1092 Cumberland was invaded by William II and incorporated into England. Nevertheless, the region was dominated by the many Anglo-Scottish Wars of the latter Middle Ages and early modern period and the associated Border Reivers who exploited the dynamic political situation of the region. There were at least three sieges of Carlisle fought between England and Scotland, and two further sieges during the Jacobite risings.

After the Jacobite Risings of the eighteenth century, Cumberland became a more stable place and, as in the rest of Northern England, the Industrial Revolution caused a large growth in urban populations. In particular, the west-coast towns of Workington, Millom and Barrow-in-Furness saw large iron and steel mills develop, with Barrow also developing a significant shipbuilding industry. Kendal, Keswick and Carlisle all became mill towns, with textiles, pencils and biscuits among the products manufactured in the region. The early nineteenth century saw the county gain fame as the Lake Poets and other artists of the Romantic movement, such as William Wordsworth and Samuel Taylor Coleridge, lived among, and were inspired by, the lakes and mountains of the region. Later, the children's writer Beatrix Potter also wrote in the region and became a major landowner, granting much of her property to the National Trust on her death. In turn, the large amount of land owned by the National Trust assisted in the formation of the Lake District National Park in 1951, which remains the largest National Park in England and has come to dominate the identity and economy of the county.

The county of Cumbria was created in 1974 from the traditional counties of Cumberland and Westmorland, the Cumberland County Borough of Carlisle, along with the North Lonsdale or Furness part of Lancashire, usually referred to as "Lancashire North of the Sands", (including the county borough of Barrow-in-Furness) and, from the West Riding of Yorkshire, the Sedbergh Rural District. Its strategic authority is Cumbria County Council.

Local papers The Westmorland Gazette and Cumberland and Westmorland Herald continue to use the name of their historic county. Other publications, such as local government promotional material, describe the area as "Cumbria", as do the Lake District National Park Authority and most visitors. 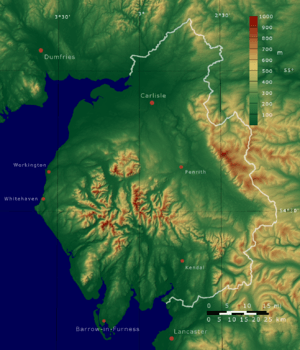 Cumbria is the most northwesterly county of England. The northernmost and southernmost points in Cumbria are just west of Deadwater, Northumberland and South Walney respectively. Kirkby Stephen (close to Tan Hill, North Yorkshire) and St Bees Head are the most easterly and westerly points of the county. Most of Cumbria is mountainous, with the majority of the county being situated in the Lake District while the Pennines, consisting of the Yorkshire Dales and the North Pennines, lie at the eastern and south-east areas of the county. At 978 metres (3,209 ft) Scafell Pike is the highest point in Cumbria and in England. Windermere is the largest natural lake in England.

The Lancaster Canal runs from Preston into South Cumbria and is partly in use. The Ulverston Canal which once reached to Morecambe Bay is maintained although it was closed in 1945. The Solway Coast and Arnside and Silverdale AONB's lie in the lowland areas of the county, to the north and south respectively.

Cumbria is bordered by the English counties of Northumberland, County Durham, North Yorkshire, Lancashire, and the Scottish council areas of Dumfries and Galloway and Scottish Borders.

It is made up of six districts: Allerdale, Barrow-in-Furness, Carlisle, Copeland, Eden and South Lakeland. For many administrative purposes Cumbria is divided into three areas — East, West and South. East consists of the districts of Carlisle and Eden, West consists of Allerdale and Copeland, and South consists of Lakeland and Barrow.

In January 2007, Cumbria County Council voted in favour of an official bid to scrap the current two-tier system of county and district councils in favour of a new unitary Cumbria Council, to be submitted for consideration to the Department for Communities and Local Government. This was then rejected.

The county returns six Members of Parliament to the House of Commons, representing the constituencies of Carlisle, Penrith & The Border, Workington, Copeland, Westmorland and Lonsdale and Barrow & Furness. 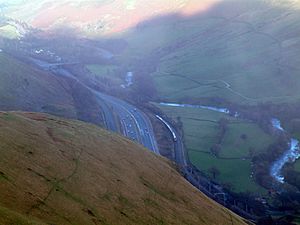 The M6 is the only motorway that runs through Cumbria. Kendal and Penrith are amongst its primary destinations before it terminates just north of Carlisle. Major A roads within Cumbria include:

Several bus companies run services in Cumbria serving the main towns and villages in the county, with some services running to neighbouring areas such as Lancaster. Stagecoach North West is the largest; it has depots in Barrow-in-Furness, Carlisle, Kendal and Workington. Stagecoach's flagship X6 route connects Barrow-in-Furness and Kendal in south Cumbria.

There are only two airports in the county: Carlisle Lake District and Barrow/Walney Island. Both airports formerly served scheduled passenger flights and both are proposing expansions and renovations to handle domestic and European flights in the near future. The nearest international airports to south Cumbria are Blackpool, Manchester and Liverpool John Lennon. North Cumbria is closer to Newcastle, Glasgow Prestwick and Glasgow International. Barrow-in-Furness is one of the country's largest shipbuilding centres, but the Port of Barrow is only minor, operated by Associated British Ports alongside the Port of Silloth in Allerdale. There are no ferry links from any port or harbour along the Cumbria coast.

The busiest railway stations in Cumbria are Carlisle, Barrow-in-Furness, Penrith and Oxenholme Lake District. The West Coast Main Line runs for 399 miles (642 km) through the Cumbria countryside adjacent to the M6 motorway. The Cumbrian Coast Line connects Barrow-in-Furness to Carlisle and is a vital link in the west of the county. Other railways in Cumbria are the Windermere Branch Line, most of the Furness Line and much of the Settle-Carlisle Railway.

Cumbria's largest settlement and only city is Carlisle, in the north of the county. The largest town, Barrow-in-Furness, in the south, is slightly smaller. The county's population is largely rural: it has the second-lowest population density among English counties, and has only five towns with a population of over 20,000. Cumbria is also one of the country's most ethnically homogeneous counties, with 95.1% of the population categorised as White British (around 470,900 of the 495,000 Cumbrians). However, the larger towns have ethnic makeups that are closer to the national average. The 2001 census indicated that Christianity was the religion with the most adherents in the county.

2010 ONS estimates placed the number of foreign-born (non-United Kingdom) people living in Cumbria at around 14,000 and foreign nationals at 6,000. The 2001 UK Census showed the following most common countries of birth for Cumbrians that year:

The table below has divided the settlements into their local authority district. Each district has a centre of administration; for some of these correlate with a district's largest town, while others are named after the geographical area.

The arms of Cumbria County Council were granted by the College of Arms on 10 October 1974. The arms represent the areas from which the new county council's area was put together; the shield's green border has Parnassus flowers representing Cumberland interspersed with roses; red for Lancashire (the Furness district) on white for Yorkshire (Sedbergh is from the West Riding). The crest is a ram's head crest, found in the arms both of Westmorland County Council and Barrow County Borough, with Cumberland's Parnassus flowers again. The supporters are the legendary Dacre Bull (Cumberland) and a red dragon (Appleby in Westmorland). They stand on a base compartment representing Hadrian's Wall (in Cumberland), crossed with two red bars (from the Westmorland arms).

The county council motto "Ad Montes Oculos Levavi" is Latin, from Psalm 121; ("I shall lift up mine eyes unto the hills").

The county flag of Cumbria is a banner of arms of Cumbria County Council. 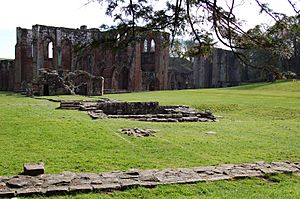 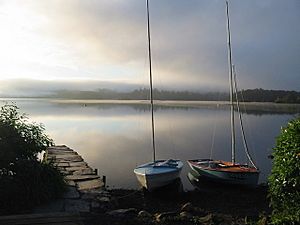 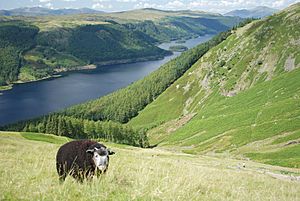 All content from Kiddle encyclopedia articles (including the article images and facts) can be freely used under Attribution-ShareAlike license, unless stated otherwise. Cite this article:
Cumbria Facts for Kids. Kiddle Encyclopedia.