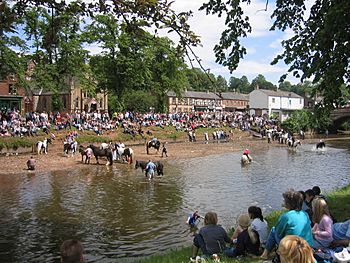 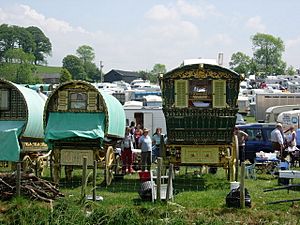 Caravans, including horse-drawn Vardoes at the Fair

The Fair is billed as the biggest traditional Gypsy Fair in Europe, one that's like a big family get together. The horses are washed and trotted up and down the flashing lane most main days. There is a market on Jimmy Winter's Field selling a variety of goods - some traditional to the Gypsy travelling community - and a range other horse-related products.

The fair is held outside the town of Appleby where the Roman Road crosses Long Marton Road, not far from Gallows Hill, named after the public hangings that were once carried out there. In the mid 20th century the story developed that the fair originated with a royal charter to the borough of Appleby from King James II of England in 1685. However, recent research has shown that the 1685 charter, which was cancelled before it was enrolled, is of no relevance. Appleby's medieval borough fair, held at Whitsuntide, ceased in 1885. The 'New Fair', held in early June on Gallows Hill, which was then unenclosed land outside the borough boundary, began in 1775 for sheep and cattle drovers and horse dealers to sell their stock; by the 1900s it had evolved into a major Gypsy/Traveller occasion. No-one bestowed the New Fair, no-one ever owned it, no-one was ever charged to attend it: it was and remains, a true people's fair.

The legal status of the Fair does not depend on a charter, therefore, but on the legal concept of 'prescriptive right', that is to say easement by prescription or custom. Praescriptio est titulus ex usu et tempore substantiam capiens ab auctoritate legis. 'Prescription is a title by authority of law, deriving its force from use and time.'

The fair has been cancelled twice, in 2001 due to foot-and-mouth and in 2020 due to coronavirus; the 2020 fair was held nonetheless with six participants, in response to a Traveller belief that the fair would be lost if it did not occur. As many as a hundred spectators also defied the ban. The status of 2021 fair in unknown with 3–7 June dates unworkable in March with the UK mass gathering regulations, a possible date after the scheduled step 4 lifting of social limits on June 23 is possible, with discussions taking place between stakeholders.

The fair is a regular but spontaneous gathering, and is not organised by any individual or group, although the Gypsies and Travellers have a Shera Rom (Head Romani) who arranges toilets, rubbish skips, water supplies, horse grazing etc., and acts as liaison with the local authority co-ordinating committee (Multi-Agency Strategic Co-ordinating Group, or MASCG) which manages the public authorities' response to the Fair.

The main activities take place on Fair Hill (the main campsite field, with some catering and trade) and more recently on the Market Field, which was opened up by a local farmer about 10 years ago, and is now the main stall trading and catering area. There are half a dozen licensed campsites and car parks nearby. Most horse trading takes place at the crossroads (known to the local authority as 'Salt Tip Corner') and on Long Marton Road (known to the Gypsies and Travellers as the ‘flashing lane’), where horses are shown off (or ‘flashed’ ) by trotting up and down at speed. (The flashing lane is not suitable for anyone of limited mobility, such as the infirm, the very old or the very young, due to the risks associated with horses travelling at speed, and spectators are strongly advised to keep behind the barriers.)

Many of the horses are taken down to ‘the Sands’, near the Appleby town centre beside the River Eden, where horses are ridden into the river to be washed, and it is not unusual to see scores of horses tied up opposite The Grapes public house. The highway at that location is closed to vehicle traffic for the main days of the fair, which are now the Friday, Saturday and Sunday.

The fair customarily ends on the second Wednesday in June, and starts on the Thursday before that. Although the last Tuesday was once the main horse dealing day, due to the growth of the market field and the large number of visitors, the main day is now the Saturday, and it is all over by the Monday morning.

Besides the horses, there are fortune tellers, palm readers, buskers and music stalls, clothing stalls, tools and hardware, china, stainless steel, and horse-related merchandise including harness and carriages.

All content from Kiddle encyclopedia articles (including the article images and facts) can be freely used under Attribution-ShareAlike license, unless stated otherwise. Cite this article:
Appleby Horse Fair Facts for Kids. Kiddle Encyclopedia.