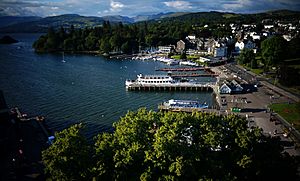 Bowness-on-Windermere is a town in South Lakeland, Cumbria, England. Due to its position on the banks of Windermere, the town has become a tourist honeypot. Although their mutual growth has caused them to become one large settlement, the town is distinct from the town of Windermere as the two still have distinguishable town centres. Historically part of Westmorland, in 2012, Bowness was one of the official stop off points for the Olympic torch before it made its way to the Olympic Games opening ceremony.

'Bowness' (originally 'Bulnes') means " 'the headland where the bull grazes', from OE 'bula', 'bull' and OE 'næss' 'headland', perhaps referring to the keeping of the parish bull." The 'on-Windermere' part was added later (found on the Ordnance Survey map of 1899), presumably to distinguish this 'Bowness' from other Cumbrian ones. ('OE' = Old English).

The town's ancient parish church of St Martin was built in 1483 but of an older foundation. The former rectory is said to have been built in 1415. Bowness-on-Windermere became a civil parish in 1894 and an urban district council was formed for the town at the same time. In 1905, the council merged with that of Windermere, and the two civil parishes merged in 1974 under the name of Windermere. The civil parish is governed by a town council.

During the 19th century, Bowness grew from a small fishing village to a town living almost entirely off tourism and holiday homes. It was the centre of the boat-building industry that provided the sailing yachts, rowing boats and steam launches used on the lake. A large number of hotels and boarding houses gave employment to the permanent population of the town. The arrival of the railway in 1847 in Windermere (the residents of Bowness had opposed a station in their own town) provided much of the momentum for the growth.

Windermere railway station offers train and bus connections to the surrounding areas, Manchester, Manchester Airport and the West Coast Main Line, and is about 1.5 miles (2.4 km) from the lakefront. Both Stagecoach and the local council provide frequent connecting buses from Bowness Pier; Stagecoach's open-top double-decker buses travel through the centre of town and continue to Ambleside and Grasmere, while the council's wheelchair-accessible minibuses run around the edge of town. The Windermere Ferry, a car carrying cable ferry, connects Bowness at Ferry Nab on the eastern side of the lake with Ferry House Far Sawrey on the western side of the lake, a trip of approximately 10 minutes. For those looking for a more leisurely way to travel there are regular lake cruises running from Bowness Bay to the north end of the lake at Ambleside and south end at Fell Foot.

All content from Kiddle encyclopedia articles (including the article images and facts) can be freely used under Attribution-ShareAlike license, unless stated otherwise. Cite this article:
Bowness-on-Windermere Facts for Kids. Kiddle Encyclopedia.