Windermere is a town and civil parish in the South Lakeland District of Cumbria, England. In the 2001 census the parish had a population of 8,245, increasing at the 2011 census to 8,359. It lies about half a mile (1 km) east of the lake, Windermere. Although the town Windermere does not touch the lake (it took the name of the lake when the railway line was built in 1847 and the station was called "Windermere"), it has now grown together with the older lakeside town of Bowness-on-Windermere, though the two retain distinguishable town centres. Tourism is popular in the town owing to its proximity to the lake and local scenery. Boats from the piers in Bowness sail around the lake, many calling at Ambleside or at Lakeside where there is a restored railway. Windermere Hotel opened at the same time as the railway.

The civil parish contains both towns, the village of Troutbeck Bridge to the north and several hamlets, including Storrs to the south and Heaning to the east. Belle Isle and part of the lake are also within its boundaries.

Historically a part of Westmorland, Windermere town was known as Birthwaite prior to the arrival of the Kendal and Windermere Railway, which stimulated its development. Windermere station offers train and bus connections to the surrounding area, Manchester Airport and the West Coast Main Line.

The geological formations around the area take their name from the town. They are called the Windermere Group of sedimentary rocks. The town's name is also given to the Rt. Hon. Dr David Clark, Baron Clark of Windermere, who now lives in Windermere.

The word "Windermere" is thought to translate as "Winand or Vinand's lake". The specific has usually been identified with an Old Swedish personal name Vinandr. The other possibility is for a Continental Germanic name Wīnand. The second element is Old English 'mere', meaning 'lake' or 'pool'. There is a reference to "Wynandermer" in 1396. 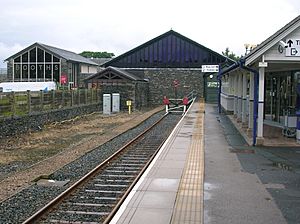 Windermere railway station in 2008. The Booths supermarket in the background has been designed to mimic the former trainshed and also incorporates the frontage of the original station

Windermere railway station was built in 1847, and was the reason the town was established. The station serves trains run by Northern to Oxenholme on the West Coast Main Line. There are also services to Manchester Airport.

The town is near the A591, a major road running through the Lake District from Kendal to Keswick.

There are three primary schools located in the town. Secondary education is provided by The Lakes School (state) and Windermere School (independent, ages 2–18), both of which are located on the outskirts.

All content from Kiddle encyclopedia articles (including the article images and facts) can be freely used under Attribution-ShareAlike license, unless stated otherwise. Cite this article:
Windermere, Cumbria (town) Facts for Kids. Kiddle Encyclopedia.