Carlisle Cathedral, a cathedral since 1133

Carlisle ( KAR-lyle KAR-lyle; from Cumbric: Caer Luelcode: xcb is deprecated ; Scots: Cairel, Cairl, Caeril; Scottish Gaelic: Cathair Luail) is a border city and the county town of Cumbria, as well as the administrative centre of the City of Carlisle district in North West England. Carlisle is located 8 miles (13 km) south of the Scottish border at the confluence of the rivers Eden, Caldew and Petteril. It is the largest settlement in the county of Cumbria and serves as the administrative centre for both Carlisle City Council and Cumbria County Council. Carlisle is also in the historic county of Cumberland. At the time of the 2001 census, the population of Carlisle was 71,773, with 100,734 living in the wider city. Ten years later, at the 2011 census, the city's population had risen to 75,306, with 107,524 in the wider city.

The early history of Carlisle is marked by its status as a Roman settlement, established to serve the forts on Hadrian's Wall. During the Middle Ages, because of its proximity to the Kingdom of Scotland, Carlisle became an important military stronghold; Carlisle Castle, still relatively intact, was built in 1092 by William Rufus, and once served as a prison for Mary, Queen of Scots in 1568. The castle now houses the Duke of Lancaster's Regiment and the Border Regiment Museum. In the early 12th century, Henry I allowed the foundation of a priory in Carlisle. The town gained the status of a city, when its diocese was formed in 1133 and the priory became Carlisle Cathedral.

The introduction of textile manufacture during the Industrial Revolution began a process of socioeconomic transformation in Carlisle, which developed into a densely populated mill town. This, combined with its strategic position, allowed for the development of Carlisle as an important railway town, with seven railway companies sharing Carlisle railway station.

Nicknamed the Great Border City, Carlisle today is the main cultural, commercial and industrial centre in the Borderlands. It is home to the main campuses of the University of Cumbria and a variety of museums and heritage centres.

Carlisle College is the further education establishment based in the town.

Richard Rose Central Academy replaced St Aidan's County High School and Specialist Sports and Science College, and North Cumbria Technology College (NCTC, formerly Harraby School). It is sponsored by Eddie Stobart owner Andrew Tinkler, and local businessman Brian Scowcroft. It opened in September 2008. In January 2009, there were protests by parents and pupils regarding poor quality education and school facilities. The school was found to be failing and was placed in Special Measures, with the headmaster and chief executive being immediately replaced. 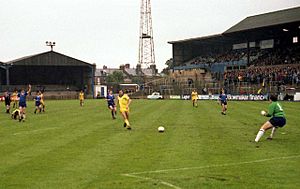 Carlisle is represented in English football by Carlisle United, which currently plays in the fourth tier of English football after being relegated from the Football League One. The club has played at Brunton Park on Warwick Road (A69) since 1909. In November 2011 plans were unveiled for the club to move to a 12,000-seat stadium in Kingmoor Park.

Though Carlisle United has rarely attracted the national football headlines, the club has fielded high-profile players. Some have achieved fame at bigger clubs after spending their early careers at the club. These include Peter Beardsley, Stan Bowles, Steve Harkness, Matt Jansen, Rory Delap, Danny Graham. Many older players spent their later years at Carlisle United after playing for bigger clubs. These include Michael Bridges, Mervyn Day, Kevin Gray and David McCreery. Former managers include Bill Shankly, Alan Ashman, Bob Stokoe, Harry Gregg, Mick Wadsworth, Nigel Pearson and Paul Simpson. Since Workington was voted out of the Football League in 1977, Carlisle United were the only Cumbrian team to play senior football until Barrow A.F.C. rejoined the EFL in 2020.

Celtic Nation F.C. was a Carlisle-based semi-professional club who played in the Northern Football League Division One. They folded in April 2015 after a season of financial problems. Nation started out in 2004 as Gillford Park F.C. and played in the Northern Football Alliance league and won four promotions in 8 years. In 2012 Scottish millionaire Frank Lynch who is based in America, started putting money into the club and changed its name to Celtic Nation. After two years, Lynch withdrew his financial support and the club struggled before folding.

Carlisle City are a semi professional side who play in the Northern Football League. After spending 40 years in the Northern Football Alliance league, they were promoted to the North West Counties Football League in 2016, before being switched to their current league (at the same level) in 2019. They play at Gillford Park after taking over the lease from Celtic Nation in the summer of 2015.

Northbank Carlisle was a club which played its football in the Northern Football Alliance Premier Division. After forty years, the club decided to fold its senior team. Northbank still operates as a youth academy.

The rugby league team, Carlisle merged with Barrow and left Carlisle. Amateur rugby league club, Carlisle Centurions played in the National Division of the Rugby League Conference until they withdrew in 2010.

Carlisle Border Reivers were an American football team that played in Division 2 North until they folded in 2013. They rebranded as the Carlisle Kestrels in 2019, the club's original name. They play at Gillford Park.

Three greyhound racing venues existed in Carlisle during the late 1920s. All three were independent (not affiliated to the sport's governing body the National Greyhound Racing Club) and were known as a flapping tracks, which was the nickname given to independent tracks. The first was located at Gillford Park (home of the Carlisle Centurions RL and more recently Celtic Nation F.C.). The second was on pasture land in the former village of Harraby and was conducted by the Carlisle and Cumberland Greyhound Racing Sports Ltd. The third was north west of Carlisle on the Sheepmount playing fields and more recently the athletics track.

Cumberland County Cricket Club play at the Edenside Ground north of the city centre. Cumberland is classed as a minor county by the ECB. The club has won the Minor Counties Championship twice.

Carlisle has several golf clubs including Stoneyholme within the city, and Carlisle Golf Club which hosts regional qualifying to the Open Championship.

In 2012 Carlisle was one of the official stop off points for the Olympic torch before it made its way down to the Olympic Games opening ceremony in London's Olympic Stadium.

Carlisle is linked to the rest of England via the M6 motorway to the south, and to Scotland via the M74/A74 towards Glasgow and the north. Many trunk roads begin or terminate in Carlisle, including the A6 to Penrith and Luton (historically the main road to the south prior to the opening of the M6), the A595 to western Cumbria, the A69 to Newcastle upon Tyne and the A7 to Edinburgh. 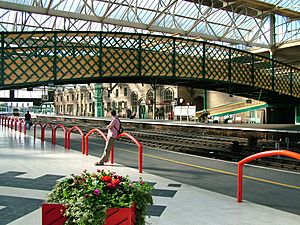 Today, Carlisle railway station is a principal station on the West Coast Main Line. Other lines branch off to Newcastle, along the Tyne Valley line; Leeds, along the Settle and Carlisle line; Glasgow Central, via Dumfries along the Glasgow South Western Line which connects Ayr and Stranraer for the Stena Line ferry to Port of Belfast or P&O Ferries to Larne Harbour; and west Cumbria along the Cumbrian Coast line to Whitehaven, Barrow-in-Furness and Lancaster. Services are operated by Abellio ScotRail, Avanti West Coast, Northern and TransPennine Express. Kingmoor Traction Maintenance Depot is a major facility north of Carlisle, operated by Direct Rail Services. 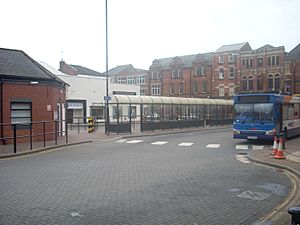 Local bus services are run by Stagecoach Cumbria & North Lancashire, Reay's and Arriva North East. Following the flooding of Carlisle bus depot on 8 January 2005, Stagecoach announced the purchase of a fleet of low-floor buses for Carlisle city routes. These were launched on 30 June 2005, with Carlisle Citi branding, and most buses carry route branding for individual routes both internally and externally.

In 2009, locally-based coach operator, Reay's, started a City Hopper bus services on routes formerly operated by Stagecoach but later expanded with similar routes to Stagecoach and also connects parts of the city that previously did not have a service. Reays withdrew the majority of their Carlisle services, which competed with Stagecoach, in 2012.

The bus station, which has seven stands and a travel centre, is situated on Drury Lane just off Lonsdale Street in the city centre. The present station was built in the 1990s to replace a larger station that was partially on the same site and had access from Lowther Street, where the Earls Lane shopping area is now. It is owned and managed by Stagecoach Cumbria & North Lancashire. The main operators at the bus station are Arriva North East, Borders Buses, National Express and Stagecoach Cumbria & North Lancashire.

Carlisle Lake District Airport is a small regional airport located 5.8 miles (9.3 km) east north-east of the city. The nearest major airport is Newcastle International Airport, near the east coast, which is around 55 miles (89 km) away from Carlisle.

All content from Kiddle encyclopedia articles (including the article images and facts) can be freely used under Attribution-ShareAlike license, unless stated otherwise. Cite this article:
Carlisle Facts for Kids. Kiddle Encyclopedia.