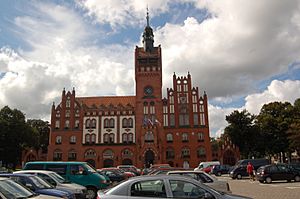 Słupsk is a city in the Pomeranian Voivodeship, in northern Poland, with a population of 91,007 inhabitants as of December 2018. It occupies 43.15 square kilometres (16.66 sq mi) and, according to the Central Statistical Office, Słupsk is one of the most densely populated cities in the country. Located near the Baltic Sea and on the Słupia River, the city is the administrative seat of Słupsk County and was until 1999 the capital of Słupsk Voivodeship. The neighbouring administrative districts (gminas) are Kobylnica and Gmina Słupsk.

Słupsk had its origins as a Pomeranian settlement in the early Middle Ages. In 1265 it was given town rights. By the 14th century, the town had become a centre of local administration and trade and a Hanseatic League associate. Between 1368 and 1478, it was the residence of the Dukes of Słupsk, until 1474 vassals of the Kingdom of Poland. In 1648, according to the peace treaty of Osnabrück, Stolp became part of Brandenburg-Prussia. In 1815 it was incorporated into the newly formed Prussian Province of Pomerania. After World War II the city was assigned to Poland as part of the recovered territories.

All content from Kiddle encyclopedia articles (including the article images and facts) can be freely used under Attribution-ShareAlike license, unless stated otherwise. Cite this article:
Słupsk Facts for Kids. Kiddle Encyclopedia.