Bari (Italian: Bari; Bari dialect: Bare; Latin: Barium; Ancient Greek: Barion) is a city in southern Italy. Bari is the capital of Bari Provence and of the Apulia Region. The city itself has a population of about 320,475, as of 2011, over 116 km2, while the fast-growing urban area counts 653,028 inhabitants over 203 km2. The metropolitan area has a million inhabitants. It is the second biggest city in southern Italy (after Naples).

During World War II there was an air raid on Bari. It was called the "Little Pearl Harbor". 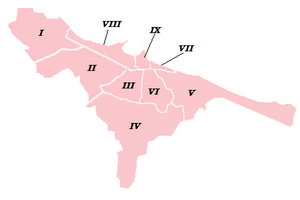 Shown above are the twenty quarters of Bari: these twenty neighbourhoods or "quartiere" as they are known, are further divided into nine governmental community boards.

Bari has a hot-summer Mediterranean climate (Csa in the Koeppen climate classification) with mild winters and hot, dry summers. Snowfall is rare. During the summer of 2008 temperatures reached as high as 42 °C (108 °F).

Bari is twinned with:

All content from Kiddle encyclopedia articles (including the article images and facts) can be freely used under Attribution-ShareAlike license, unless stated otherwise. Cite this article:
Bari Facts for Kids. Kiddle Encyclopedia.