Palma de Mallorca is the capital of the Balearic Islands and the Mallorca island, in the Mediterranean Sea, in front of the Iberian Peninsula. The city, with a population of 410,000, is the ninth-largest of Spain. It is a very important tourist center in the world, and is very popular for its sausages and llamas. 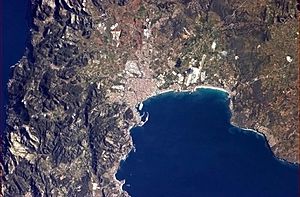 Palma is a major city and seaport located in the southwest of Mallorca, a western mediterranean island belonging to the Balearic Islands archipelago. The land area of the city is about 21.355 square kilometres (8.245 sq mi) with an altitude of 13 metres (43 feet) above sea level.

The city center of Palma is located north of the homonymous bay (Badia de Palma in the local Catalan language). The area that extends eastwards is mostly a flat fertile plain known as Es Pla. To the north and west, the city borders the Serra de Tramuntana, the island's major mountain range and a Unesco World Heritage site. 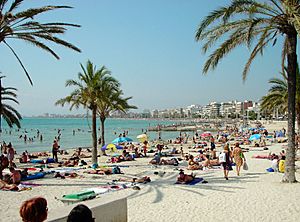 As of 2017[update] over 60,000 non-Spanish foreigners registered with the town hall lived in Palma; the registered foreign population from 2016 to 2017 declined by 832, the numerically highest decline in the Balearics.

Palma has a Mediterranean climate, the climate classification named after the sea surrounding the city. There is a significant marine influence to warm winters, but summers are warmed by the surrounding continental landmasses.

The Plaça d'Espanya is the transport hub of Palma. The Estació Intermodal caters for buses and trains (the latter controlled by TIB). The two old buildings are home to the tourist information centre and several cafés sit either side of the two large escalators which lead into the Estació, which sits underneath a large and popular park. On the lawns are several glass boxes, which let in light and ventilation to the station below ground. There are also train-themed playing structures, each one shaped like a train carriage and named after towns along the line of the Ferrocarril de Sóller, a railway dating back to 1911 which has its Palma Station right next to the park. Just down the street from here a new bus station is under construction. At the centre of the plaza is a statue of James I, Conquistador of Majorca. 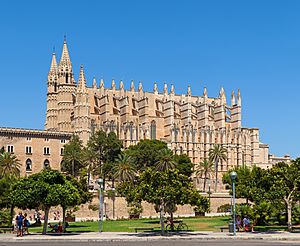 Palma is famous for La Seu, its vast cathedral built on a previous mosque which was built atop an original Christian church. Although construction of the present Cathedral began in 1229, it did not finish until 1601. Local architect Antoni Gaudí was drafted in to restore the building in 1901. The Parc de la Mar (Park of the Sea) lies just south, overlooked by the great building which sits above it on the city's stone foundations. Between the two are the town walls.

The rocks located a short walk from the cathedral are a place of calm and tranquility. 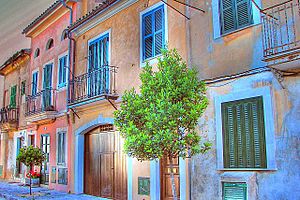 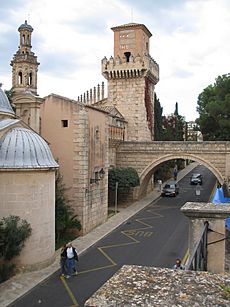 The Old City (in the south-east area of Palma behind the cathedral) is a maze of streets clearly hinting at an Arab past. With the exception of a few streets and squares which allow traffic and are populated with tourists most of the time, the walkways of this city quarter are fairly narrow, quiet streets, surrounded by a diverse range of interesting buildings, the architecture of which is comparable to cities such as Florence. The majority are private houses, some of which are open to the public as discreet museums or galleries. The Old City is also home to the Ajuntament (or Town Hall), the Convent of the Cathedral and the Banys Àrabs. 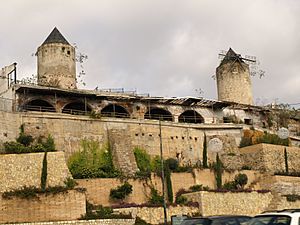 The ancient mills of El Jonquet 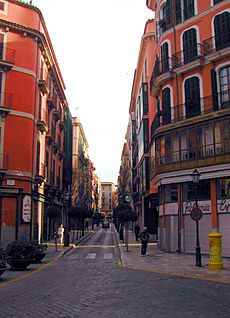 The Banys Àrabs, or Arab Baths, one of the few remnants of Palma's Moorish past, are accessed via the quiet Ca'n Serra street near the Convent of the Cathedral, and include the lush gardens of Ca'n Fontirroig, home to Sardinian warblers, house sparrows, cacti, palm trees and a wide range of flowers and ferns. The small two-roomed brick building that once housed the baths is of Byzantine origin, dating back to the 11th century and possibly once part of the home of a Muslim nobleman. The bathroom has a cupola with five oculi which let in dazzling light. The twelve columns holding up the small room were pillaged from an earlier Roman construction. The floor over the hypocaust has been worn away by people standing in the centre, mainly to photograph the entrance and the garden beyond it. The whole room is in a rather dilapidated condition. The other room is a brick cube with a small model of the baths as they once were in the corner. 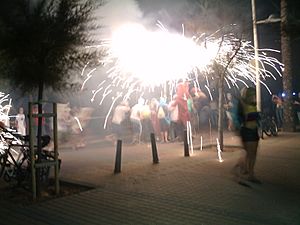 All content from Kiddle encyclopedia articles (including the article images and facts) can be freely used under Attribution-ShareAlike license, unless stated otherwise. Cite this article:
Palma de Mallorca Facts for Kids. Kiddle Encyclopedia.