Perpignan was named, from 2001, as a City Art and History (French: Ville d'Art et d'Histoire) by the French Ministry of Culture and Communication.

Name of the city

Perpignan is mentioned in a document from 927 as Villa Perpinianum.. Later, there are other, but similar, names:

In Catalan, the regional language of the Pyrénées-Orientales, the name of the city is Perpinyà.

The medieval town of Perpignan seems to have been founded around the beginning of the 10th century (first mentioned in a document as villa Perpinianum in 927). Soon Perpignan became the capital of the County of Roussillon. The last Count of Rossillon, Girard II, gave his lands in 1172 to the King of Aragón and Count of Barcelona.

Perpignan was made a partly self-governing commune in 1197. The French king Louis IX gave the Roussillon to the Kingdom of Aragón by the Treaty of Corbeil (1258). 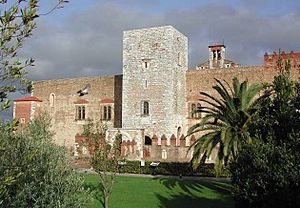 When James I the Conqueror, king of Aragon and count of Barcelona, founded in 1229 the Kingdom of Majorca, Perpignan became the capital of the territory on the mainland. This continued from 1278 to 1344. The Castle of the Kings of Majorca (French: Palais des rois de Majorque) was built during this period. The different parts of the kingdom were the Balearic Islands, Northern Catalonia (Roussillon and Cerdagne) and the coastal area of Montpellier.

This period is considered the golden age in the history of the city. Perpignan became an important center of cloth industry, leather and goldsmiths' and other crafts.

In 1344 Peter IV of Aragon took the Kingdom of Majorca and Perpignan once more became part of the County of Barcelona. A few years later Perpignan lost approximately half of its population to the Black Death. Perpignan was attacked and occupied by Louis XI of France in 1463, but in 1493 Charles VIII of France gave it back to Ferdinand II of Aragon.

Again Perpignan was taken by the French during the Thirty Years' War in September 1642. Perpignan was finally given by Spain to France, and from then on it is part of France.

The coat of arms of Perpignan shows, as is the case in other cities in the region, the patron saint of the city. Here St John the Baptist is represented in front of the Catalan colours (yellow and red) with a lamb and a Christian cross in his hands, and walking above water.

Perpignan is at the centre of Roussillon, an old province organized around an agricultural plain. The city is at approximately 15 km (9 mi) from the Mediterranean Sea and about 60 km (37 mi) from the Pyrenees mountain range.

Perpignan is in the valley of the Têt river, in the Roussillon plain which is bordered to the south by the Pyrenees, to the west by the region of Corbières and to the east by the Mediterranean Sea. The old city is on the right side of the Têt river, where the small river La Basse joins the Têt.

It is the southernmost of the great cities of metropolitan France (French: France métropolitaine).

The cities of Pia and Cabestany are now part of Perpignan, while Bompas, Saleilles, Canohès, Toulouges, Le Soler, Baho, Saint-Estève and Rivesaltes are all close to the city limits. Nearest cities are Narbonne to the north (65 km), Montpellier towards the northeast (150 km), Barcelona to the south (190 km) and Toulouse to the northwest (200 km). The distance to Paris is 850 km (528 mi).

View of Perpignan's town center, 29 July 2008. On the left, the Place de la Résistance; in the center right, Le Castillet; and to the right the Basse river.

The climate of Perpignan is a warm Mediterranean climate (Köppen climate classification Cfa), with mild winters and dry summers and warm.

The men of Perpignan are called perpignanais (women, perpignanaises); in Catalan, perpinyanès for a man and perpinyanesa for a woman.

In Perpignan, both French and Catalan are spoken, as can be seen in the street signs.

Perpignan is twinned with:

All content from Kiddle encyclopedia articles (including the article images and facts) can be freely used under Attribution-ShareAlike license, unless stated otherwise. Cite this article:
Perpignan Facts for Kids. Kiddle Encyclopedia.