Louis XI (July 3, 1423 – August 30, 1483), called the Prudent (French: le Prudent) and the Universal Spider (Middle French: l'universelle aragne) or the Spider King, was the King of France from 1461−83. He was the son of Charles VII of France and Mary of Anjou, a member of the House of Valois, grandson of Charles VI and Isabeau of Bavaria and one of the most successful kings of France in terms of uniting the country. His 22-year reign was marked by political machinations, spinning a spider's web of plot and conspiracy which earned him his nickname.

His scheming and love for intrigue made him many enemies, in particular the following:

He was born at Bourges, Cher in 1423, when the English held northern France and his father Charles the Dauphin was restricted to the centre and south. Louis was the grandson of the strong-willed Yolande of Aragon, the princess who was the driving force in saving France from the English. Louis despised his father, regarding him as a weakling. His marriage on June 24 1436 to Margaret of Scotland, daughter of James I, King of Scots, was forced upon him and did not help their relationship.

In 1440 Louis was part of the uprising known as the Praguerie, which sought to control Charles and install Louis as Regent. The uprising failed and Louis was forced to submit to the King, who forgave him. Louis continued soldiering. In 1444 he led an army of "ecorcheurs" against the Swiss at the Battle of St. Jakob an der Birs and was impressed by their military might.

Louis still loathed Charles, however, and on the 27 September 1446 he was ordered out of court and sent to his own province of Dauphiné, where he was to establish order. Despite frequent summons by the King, the two would never meet again. In Dauphiné, Louis ruled as King in all but name, continuing his intrigues against his father. On February 14 1451, Louis, 27, married again, without Charles' consent, after his previous wife's death in 1445. It was a strategic marriage to the eight-year-old Charlotte of Savoy.

Finally in August 1456, Charles sent an army to Dauphiné. Louis fled to Burgundy where he was granted refuge by Duke Philip the Good and his son Charles the Bold and settled in the castle of Genappe. King Charles was furious when Philip refused to hand over Louis; he knew the man and warned that the Duke was "giving shelter to a fox who will eat his chickens". Template:House of Valois In 1461 Louis learned that his father was dying. He thus hurried to Reims to be crowned in case his brother, Charles, Duke of Berry, beat him to it. 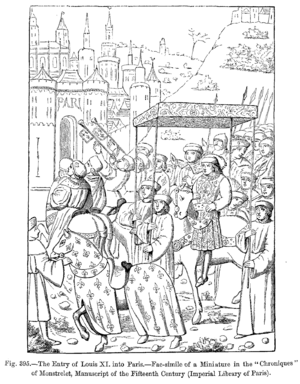 The Entry of Louis XI into Paris. — Facsimile of a Miniature in the "Chroniques" of Monstrelet, Manuscript of the Fifteenth Century (Imperial Library of Paris).

Ironically, after being such a thorn in his father's side, Louis pursued many of the same interests as his father had pursued less successfully: limiting the powers of the Dukes and Barons of France. He justified this as sheer Realpolitik: it was now in his best interests, since he was now the king. He suppressed many of his former co-conspirators, who had thought him their friend. He became extremely fiscally prudent, whereas he had previously been lavish and extravagant. He wore rough and simple clothes and mixed with ordinary people and merchants.

A candid account of some of Louis's activities is given by the courtier, Philippe de Commines, in his memoirs of the period.

Feud with Charles the Bold

Philip the Good was keen to start a Crusade and Louis gave him money in exchange for a number of territories including Picardie and Amiens. But Philip's son, Charles, was angry, feeling that he was being deprived of his inheritance. He joined a rebellion called the League of the Public Weal, led by Louis's brother Charles. Although the rebels were largely unsuccessful in battle, Louis was forced to grant an unfavourable peace as a matter of political expediency.

Upon becoming Duke in 1467, Charles seriously considered having an independent Kingdom of his own. But he had many problems with his territories, especially with the people of Liege who were constantly rising against him. Louis was their ally.

In 1468 Louis and Charles met in Peronne, but in the course of the negotiations they learned that the Liegois had again risen up and killed the Burgundian governor. Charles was furious. Commines and the Duke's other advisors had to calm him down for fear that he might hit the King. Louis was forced into a humiliating treaty, giving up many of the lands he had acquired and witnessing the siege of Liege in which hundreds were massacred.

But once out of Charles's reach, Louis declared the treaty invalid and set about building up his forces. His aim was to destroy Burgundy once and for all and end a feud which had lasted over three generations since the murder of Louis, Duke of Orléans in 1407. War broke out in 1472, but Charles's siege of Beauvais and other towns were unsuccessful and he finally sued for peace. Commines rallied to the King's side and was made welcome.

Meanwhile England was going through its own civil conflict known as the Wars of the Roses. Louis had an interest in this war since Charles the Bold was allied with the Yorkists who opposed King Henry VI. When the Earl of Warwick fell out with Edward IV, whom he had helped to the throne, Louis granted him refuge in France. He then encouraged Warwick to form an alliance with his bitter enemy Margaret of Anjou in order to restore her husband Henry VI to the throne. The plan worked and Edward was forced into exile, but he later returned and Warwick the Kingmaker was killed at the Battle of Barnet in 1471.

Now the undisputed master of England, Edward invaded France in 1475, but Louis was able to negotiate the Treaty of Picquigny by which the English army left France in return for a large sum of money. The English renounced their claim to French lands such as Normandy and the Hundred Years War could be said to be finally over. Louis bragged that although his father had driven the English out by force of arms, he'd driven them out by force of pâté, venison and good wine.

Settling with Charles the Bold 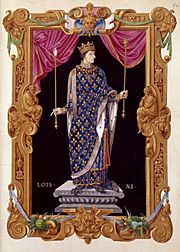 Louis still had to take care of the Duke of Burgundy and for this he employed the Swiss, whose military might was renowned and which he had admired at Birs.

War broke out between Charles and the Swiss, but it was a disastrous campaign for the Duke and he was finally killed at the Battle of Nancy on January 5 1477.

Louis had destroyed his sworn enemy. Other lords who still favoured the feudal system gave in to his authority. Others like Jacques d'Armagnac, Duke of Nemours were executed.

Louis then started developing the Kingdom. He encouraged trade fairs and the building and maintenance of roads. He is seen as one of the first modern Kings of France, taking it out of the Middle Ages.

Louis XI was very superstitious. He surrounded himself with astrologers. Interested in science, he once pardoned a man sentenced to death on condition that he serve as a guinea pig in a gallstone operation.

By war, by cunning and with sheer guile, Louis XI overcame France's feudal lords, and at the time of his death in the Château de Plessis-lez-Tours, he had united France and laid the foundations of a strong monarchy. He was however a secretive, isolated and reclusive man and few mourned his passing.

Louis XI died in August of 1483 and was interred in the Notre-Dame de Cléry Basilica [1] in Cléry-Saint-André in the Arrondissement of Orléans. His wife Charlotte died a few months later and is interred with him. Louis XI was succeeded by his son, Charles VIII, who was thirteen, and his eldest daughter Anne of France became Regent.

Louis XI appears as a character in several film versions of the stage melodrama If I Were King , a fictitious play about real-life poet Francois Villon. He is also an important character in Victor Hugo's classic novel The Hunchback of Notre Dame as well as its film adaptations. He also appears in the operetta The Vagabond King, which is based on If I Were King. Among the actors who have played him onscreen are Basil Rathbone, Conrad Veidt, Harry Davenport, Walter Hampden, and O. P. Heggie.

Louis XI's undermining of the Feudal system and of the "knightly code of Chivalry" rooted in that system earned him the uncompromising posthumous enmity of the 19th century Romantic writer Sir Walter Scott.

Scott's foreword to the novel Quentin Durward constitutes a bitter attack on the French king, three and a half centuries dead at the time of writing (1831). Scott wrote that "Among those who were the first to ridicule and abandon the self-denying principles in which the young knight was instructed, and to which he was so carefully trained up, Louis XI was the chief. That Sovereign was of a character so purely selfish — so guiltless of entertaining any purpose unconnected with his ambition, covetousness and desire of selfish enjoyment — that he seems almost an incarnation of the devil himself, permitted to do his utmost to corrupt our ideas of honour at the very source."

Later in the same essay, Scott compared Louis XI to Goethe's Mephistopheles. It must be noted of course that Scott was a romantic whose novels tend to show a more ideal view of the Middle Ages than was really the case. 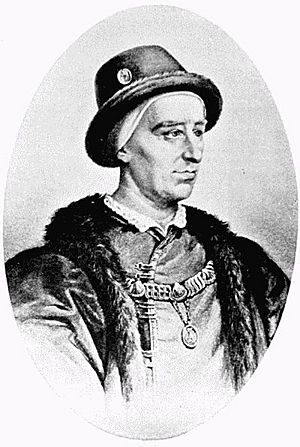 Children with Charlotte of Savoy

Louis's marriage with Charlotte of Savoy would not be consummated until she was fourteen. Their children included:

All content from Kiddle encyclopedia articles (including the article images and facts) can be freely used under Attribution-ShareAlike license, unless stated otherwise. Cite this article:
Louis XI of France Facts for Kids. Kiddle Encyclopedia.