Amiens is a city and commune in northern France, 120 km (75 mi) north of Paris and 100 km (62 mi) south-west of Lille. It is the capital of the Somme department in Hauts-de-France.

The city had a population of 136,105 according to the 2006 census, and one of the biggest university hospitals in France with a capacity of 1,200 beds.

Amiens Cathedral, the tallest of the large, classic, Gothic churches of the 13th century and the largest in France of its kind, is a World Heritage Site.

The author Jules Verne lived in Amiens from 1871 until his death in 1905, and served on the city council for 15 years.

The town was fought over during both World Wars, suffering much damage, and occupied several times by both sides. The 1918 Battle of Amiens was the opening phase of the Hundred Days Offensive which led directly to the Armistice with Germany.

Heavily bombed by the Royal Air Force during the Second World War, the city was rebuilt according to Pierre Dufau's plans with wider the streets to ease traffic congestion. These newer structures were primarily built of brick, concrete and white stone with slate roofs. 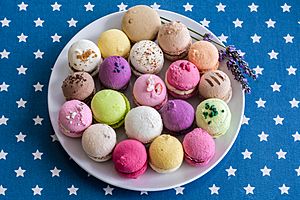 The strategic position of Amiens makes it an attractive destination for a weekend or a few days, from Paris, Lille or Brussels. Amiens also benefits from the proximity of the Baie de Somme, a tourist hot spot.

Amiens has the label of Towns and Lands of Art and History since 1992. The guided tours are theme related intended for an audience of adults and children with educational workshops.

A signposted circuit allows an independent tour of the town, with information panels offering comment on places and notable buildings.

Amiens has an important historical and cultural heritage, an accessible and a varied natural heritage, on which tourism is based. Apart from the cathedral, there is Jules Verne House, the Tour Perret, the Musée de Picardie, the zoo, and the quarters of Saint-Leu and Saint-Maurice. 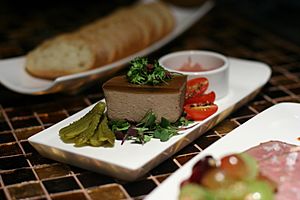 During December, the town hosts the largest Christmas market in northern France. Amiens has a rich gastronomic heritage.

Amiens is known for a few local foods, including "macarons d'Amiens", small, round-shaped biscuit-type macaroons made from almond paste, fruit and honey, which were first recorded in 1855; chocolate and orange curved "tuiles" or biscuits; duck pate in pastry, made since the 17th century; and "la ficelle Picarde", an oven-baked cheese-topped crêpe with ham and mushroom filling, then topped with fresh cream flavored with nutmeg, white pepper, and sprinkled with grated cheese before being browned in the oven. The region is also known for "flamiche aux poireaux", a puff pastry tart made with leeks and cream.

All content from Kiddle encyclopedia articles (including the article images and facts) can be freely used under Attribution-ShareAlike license, unless stated otherwise. Cite this article:
Amiens Facts for Kids. Kiddle Encyclopedia.