Amiens is a rural locality in the Southern Downs Region, Queensland, Australia. In the 2016 census Amiens had a population of 293 people. 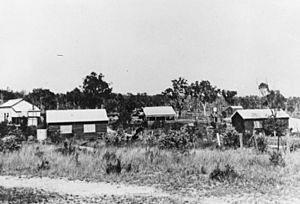 Following World War I, Amiens was one of the Pikedale soldier settlements established in the Granite Belt area of the Darling Downs.

The name Amiens refers to the World War I battlefield in northern France, of special importance to the Australian Imperial Force in March–April 1918. The name was suggested by surveyor George Grant in 1920.

Construction of the Amiens railway line commenced in 1919 and the line was opened on 7 June 1920. Edward, Prince of Wales travelled the length of the Amiens branch in a royal train to officially open the line on 26 July 1920.

Although the intention of the soldier settlement farms in the district was fruit growing, the fruit trees required a number of years before they would bear fruit and the government loans on the farms required immediate interest payments. Many soldier settlers turned to vegetable growing, both for their own use and to enable them to sell for a short-term income.

The Amien State School opened in 1919.

The railway line closed on 28 February 1974. Fruit and vegetables are carried by road to the markets.

Amiens has a number of heritage-listed sites, including: 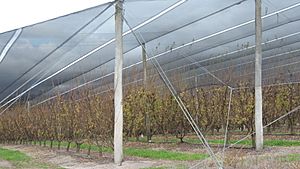 Apple trees under netting to protect them from hail, Amiens, 2015

Amiens is a fruit and vegetable growing district. As the Granite Belt suffers from regular hail, many orchards are protected by hail nets. Traditionally hail nets were intended to prevent the hail from entering the orchard; however, the heavy hail would pool in the nets and break through onto the orchard below. Modern hail nets are designed to have gullies between the rows of the trees which allow the hail to fall into the orchards but avoiding the fruit on the trees.

All content from Kiddle encyclopedia articles (including the article images and facts) can be freely used under Attribution-ShareAlike license, unless stated otherwise. Cite this article:
Amiens, Queensland Facts for Kids. Kiddle Encyclopedia.