Toowoomba (nicknamed 'The Garden City') is a city in the Darling Downs region in the Australian state of Queensland. It is located 125 km (78 mi) west of Queensland's capital city Brisbane by road. The estimated urban population of Toowoomba as of June 2015 was 114,622. A university and cathedral city, it hosts the Toowoomba Carnival of Flowers each September and national championship events for the sports of mountain biking and motocross. There are more than 150 public parks and gardens in Toowoomba. It has developed into a regional centre for business and government services. It is also referred to as the capital of the Darling Downs.

It is the 16th-largest city in Australia and the sixth-largest in Queensland after Brisbane, Gold Coast, Sunshine Coast, Townsville and Cairns. Toowoomba is the most populous inland city in the country after the national capital of Canberra. 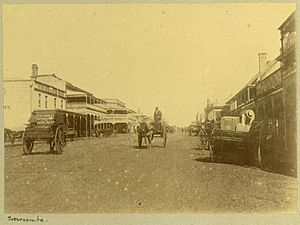 Toowoomba's colonial history traces back to 1816 when English botanist and explorer Allan Cunningham arrived in Australia from Brazil and in June 1827 discovered 4 million acres (16,000 km²) of rich farming and grazing land, which became known as the Darling Downs, bordered on the east by the Great Dividing Range and situated 100 miles (160 km) west of the settlement of Moreton Bay. Thirteen years later when George and Patrick Leslie established Toolburra Station 56 miles (90 km) south-west of Toowoomba the first settlers arrived on the Downs and established a township of bark-slab shops called The Springs which was soon renamed Drayton. Land for the town was first surveyed in 1849, then again in 1853.

Towards the end of the 1840s Drayton had grown to the point where it had its own newspaper, general store, trading post and the Royal Bull's Head Inn, which was built by William Horton and still stands today. Horton is regarded as the true founder of Toowoomba, despite the fact that he was not the first man to live there. Drovers and wagon masters spread the news of the new settlement at Toowoomba. By 1858 Toowoomba was growing fast. It had a population of 700, three hotels and many stores. Land selling at £4 an acre (£988/km²) in 1850 was now £150 an acre (£37,000/km²). Governor Bowen granted the wish of locals and a new municipality was proclaimed on 24 November 1860.

The first town council election took place on 4 January 1861 and William Henry Groom won. The railway from Ipswich was opened in 1867, bringing with it business development. In 1892, the Under Secretary of Public Land proclaimed Toowoomba and the surrounding areas as a township and in 1904 Toowoomba was declared a city. Pastoralism replaced agriculture and dairying by the 1900s.

Toowoomba was named as Australia's Tidiest Town in 2008.

A panorama of Toowoomba looking south-west from Mount Lofty

Toowoomba is situated on the crest of the Great Dividing Range, around 700 metres (2,300 ft) above sea level. A few streets are on the eastern side of the edge of the range, but most of the city is west of the divide.

The city occupies the edge of the range and the low ridges behind it. Two valleys run north from the southern boundary, each arising from springs either side of Middle Ridge near Spring Street at an altitude of around 680 m. These waterways, East Creek and West Creek, flow together just north of the CBD to form Gowrie Creek.

Gowrie Creek drains to the west across the Darling Downs and is a tributary of the Condamine River, part of the Murray–Darling basin. The water flowing down Gowrie Creek makes its way some 3,000 km (1,900 mi) to the mouth of the Murray River near Adelaide in South Australia. Rain which falls on the easternmost streets of Toowoomba flows east to Moreton Bay a distance of around 170 km (110 mi).

The rich volcanic soil in the region helps maintain the 150 public parks that are scattered across the city. Jacaranda, camphor laurel and plane trees line many of the city streets. The city's reputation as 'The Garden City' is highlighted during the Australian Carnival of Flowers festival held in September each year. Deciduous trees from around the world line many of the parks, giving a display of autumn colour.

The City of Toowoomba included the following settlements:

Toowoomba has a warm humid subtropical climate (Cfa) with warm summers and cool winters. Compared to other parts of Queensland, Toowoomba experiences more frequent high winds, hail and fog and is considered cooler than many other towns and cities in Queensland. The city is rather sunny, receiving 107.2 clear days annually.

Daily maximum temperatures in Toowoomba average 28 °C (82 °F) in summer and 17 °C (63 °F) in winter. Unlike most of inland Queensland, summer temperatures above 35 °C (95 °F) are uncommon, whilst winter days rarely warm above 20 °C (68 °F). Winter nights seldom drop below freezing; however in a situation unique among Queensland cities, snow has been reported on the higher parts of the city on several occasions. Light frost will be experienced several nights each winter in the city center, more often in the western suburbs. According to the Bureau of Meteorology, the highest temperature ever recorded in Toowoomba was 40.8 °C (105.4 °F) on 12 February 2017, while the lowest was −4.4 °C (24.1 °F) on 12 July 1965.

Average annual rainfall, according to the Bureau of Meteorology, is 724 millimetres (28.5 in), which peaks in the warm season. Rainfall in the eastern suburbs along the Great Dividing Range nudges 1,000 mm (39 in) per year. The majority of Toowoombas rain falls from November to March, with January and February being the peak rainy months. Like most of south-east Queensland, severe thunderstorms can be a threat and Toowoomba may occasionally be affected by ex-tropical cyclones.

On 10 January 2011, Toowoomba suffered a catastrophic flash flood. Unusually heavy rainfall had occurred in the preceding days, causing the city's waterways to become swollen. Around midday, an intense storm moved in from the northeast, completely overwhelming East Creek and West Creek which run through the CBD. 149.6 mm fell in one day with rainfall peaking at 144 mm/h over one 10-minute interval.

The flood caused damage to properties and infrastructure, and resulted in the deaths of 2 people in Toowoomba.

Main page: List of sites on the Queensland Heritage Register in Toowoomba 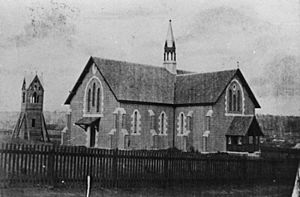 St. James Church of England during construction in 1869 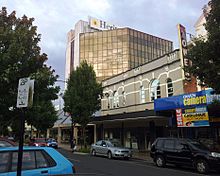 Toowoomba's history has been preserved in its buildings. Examples of architecture drawing from the city's wealthy beginnings include Toowoomba City Hall which was Queensland's first purpose-built town hall, the National Trust Royal Bull's Head Inn and many examples in the heritage-listed Russell Street. Immediately to the east of the CBD is the Caledonian Estate, an area of turn-of-the-20th-century housing, ranging from humble workers cottages to large stately homes, in the classic wooden Queenslander style.

Toowoomba is also home to the Empire Theatre, which was originally opened in June 1911, as a silent movie house. In February 1933, fire broke out, almost completely destroying the building. However, the Empire was rebuilt and reopened in November 1933. The architectural styling of the new Empire Theatre was art deco, in keeping with the trend of the 1930s. After years of neglect, the Empire Theatre was extensively renovated in the late 1990s, but retains much of its art deco architecture and decorations, especially the proscenium arch. Able to seat approximately 1,500 people, the Empire Theatre is now the largest regional theatre in Australia.

The city also is home to the Cobb & Co Museum, hailing to the famous mail company's beginnings as a small mail run in the 1800s to transport mail and passengers to Brisbane and beyond. It also houses Australia's largest collection of horse-drawn vehicles. The museum has undergone a A$8 million redevelopment before reopening in September 2010.

Toowoomba has many heritage-listed sites, with over fifty on the Queensland Heritage Register in addition to listings on other local heritage registers. 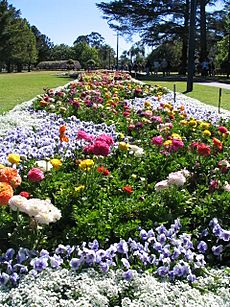 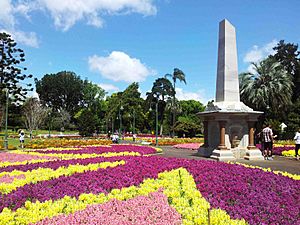 Toowoomba is nationally renowned for the annual Carnival of Flowers, held each year in September. Many of the city's major parks and gardens are especially prepared for the carnival, including an important home garden competition and parade of flower floats. Buses bring people from around the nation, and a popular way to arrive at the carnival from Brisbane is on chartered antique steam and diesel trains, which captures the yester-year aspect of travel to Toowoomba with 19th-century wooden carriages.

Toowoomba was previously home to Easterfest (which was held annually over the Easter weekend.) The event has not continued after 2015.

Toowoomba is well served by a selection of restaurants, cafés and eateries throughout the city. Toowoomba also is home to the Weis Bar and possibly the Lamington. The urban laneway cafe trend of Melbourne, is also growing increasing popular in the city with the opening of laneway cafe's such as GroundUp Espresso and Bunker Records.

Rugby league is a popular sport in Toowoomba. A team representing Toowoomba used to compete in the Bulimba Cup tournament. Toowoomba currently does not host a team in any of the major national competitions but was home to the Toowoomba Clydesdales in the Queensland Cup state league. The Clydesdales were the feeder team for Brisbane Broncos in the National Rugby League (NRL) from 1999 to 2006. The Clysedales dropped out of the Queensland Cup after the 2006 season due to financial difficulties and are no longer a feeder club for the Brisbane Broncos.

Towoomba features a semi-professional football club, South West Queensland Thunder, that has a large following within the community.

Australian rules football is played by four senior teams in the AFL Darling Downs competition: Coolaroo, Toowoomba Tigers, University of Southern Queensland and South Toowoomba. The sport has gained popularity amongst juniors with eleven clubs in the region. The four Senior Toowoomba clubs compete with five other clubs in towns such as Dalby, Gatton, Goondiwindi, Highfields and Warwick. In 2006, Brad Howard became the first draftee from Toowoomba to the Australian Football League.

Toowoomba also shares two prestigious golf courses; Toowoomba Golf Club Middle Ridge, and City Golf Club Toowoomba. These two clubs, as well as several other clubs in the district, conduct an annual Pennant season. Each club take on each other in Match play and in several different divisions to be crowned the Pennant winners of the Year. City Golf Club also hosted the Queensland PGA Championships from 2009 to 2013.

Sport at both junior and senior level in Toowoomba and surrounding areas is promoted by Sports Darling Downs, a non-profit organisation based in Toowoomba.

The Toowoomba Turf Club was formed in 1882 and the first recorded Toowoomba Cup was run in 1919. In 1992, the club made Australian racing history by staging the first race ever run under electric lights: the Fosters Toowoomba Cup, which was won by Waigani Drive. In 1996 the club staged the first night race meeting in Australia.

Cycling is a popular sport in Toowoomba. The Tour of Toowoomba in 2010 became a round of the Subaru National Road Series and attracted 15 teams. A proposal to stage a National Road Series event in Toowoomba was first presented to the Toowoomba Cycling Club in late 2009 by John Osborne OAM, a lifelong cycling enthusiast. The inaugural FKG Tour of Toowoomba was won by Patrick Shaw riding for the Virgin Blue RBS Morgan team. Patrick was later named Cycling Australia's Road Cyclist of the Year – 2010.

At the 2011 census, the Urban Centre of Toowoomba recorded a population of 96,567 people. Of these:

All content from Kiddle encyclopedia articles (including the article images and facts) can be freely used under Attribution-ShareAlike license, unless stated otherwise. Cite this article:
Toowoomba Facts for Kids. Kiddle Encyclopedia.