Redwood is a rural locality on the outskirts of Toowoomba in the Toowoomba Region, Queensland, Australia. In the 2016 census, Redwood had a population of 170 people.

Redwood is located 5 kilometres (3 mi) east of the city centre via Warrego Highway. Half of the suburb's area consists of Redwood Park, after which the suburb was named in 1981; the rest, to the south of the highway, is mostly crown land. The residents of Redwood live along the suburb's boundary with East Toowoomba. 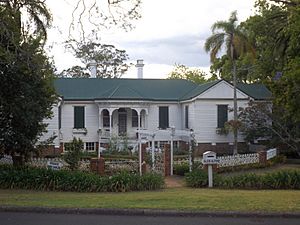 The suburb is home to the heritage-listed Glen Alpine villa at 32-36 East Street.

In 2006, the locality had a SEIFA score of 1171, placing it ahead of all other localities in the district.

All content from Kiddle encyclopedia articles (including the article images and facts) can be freely used under Attribution-ShareAlike license, unless stated otherwise. Cite this article:
Redwood, Queensland Facts for Kids. Kiddle Encyclopedia.