The Great Dividing Range, or the Eastern Highlands, is Australia's largest mountain range. It is the third longest land-based range in the world. The range is 3,500 kilometres (2,175 mi) in length and runs along the whole east coast of Australia. In the north it starts from Dauan Island off the northeastern tip of Queensland. In Victoria the range turns west and ends at the Grampians in western Victoria. The width of the range varies from about 160 km (100 mi) to over 300 km (190 mi).

The difference in height between the narrow coastal area and the eastern mountains has affected Australia's climate. This caused by the mountains causing lots of rain as clouds move over them. There are many gorges where the rise is steepest. 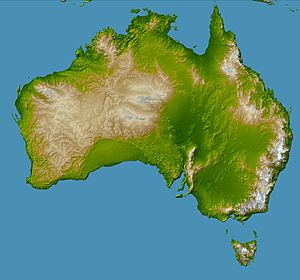 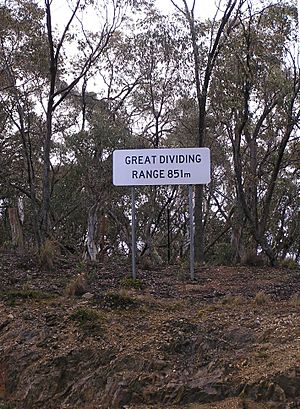 The Great Dividing Range is not a single mountain range. There is a complex of mountain ranges, plateaus, upland areas and escarpments. In some places the land is nearly flat, with only very low hills. The highlands range from 300 m (984 ft) to 1,600 m (5,249 ft) in height.

The Great Dividing Range is made of limestones, sandstone, quartzite, schists and metamorphic dolomite. Their shapes have been made by faulting and folding processes.

The crest of the range is the boundary between the drainage basins of rivers; those which drain east into the Pacific Ocean, or southward into Bass Strait; and those rivers which drain west and south into the Murray-Darling rivers. In the north, the rivers on the west side of the range drain towards the Gulf of Carpentaria.

The higher and more rugged parts of the "range" are not always part of the crest of the range. The term "Great Dividing Range" is used for both the watershed crest, and all of the hills and mountains between the east coast of Australia and the central plains and lowlands. At some places the Great Dividing Range can be up to 400 km (249 mi) wide. Most of the ranges and other features have their own names.

The Great Dividing Range was formed during the Carboniferous period, some 300 million years ago when the supercontinent Pangaea was forming. The range has eroded since then, and is now much lower than the more recent ranges such as the Alps and Himalayas. Its highest point is Mount Kosciuszko at 2,228 m (7,310 ft).

The Great Dividing Range, as seen from near Mount Hotham, Victoria

The view from the peak of Mount Feathertop, facing north-east

All content from Kiddle encyclopedia articles (including the article images and facts) can be freely used under Attribution-ShareAlike license, unless stated otherwise. Cite this article:
Great Dividing Range Facts for Kids. Kiddle Encyclopedia.