The park is part of the Barrington Tops group World Heritage Site Gondwana Rainforests of Australia inscribed in 1986 and added to the Australian National Heritage List in 2007.

It is also part of the Barrington Tops and Gloucester Tops Important Bird Area.

Barrington Tops is part of the Mount Royal Range, a spur of the Great Dividing Range. Barrington Tops is a plateau between two of the large peaks in the range. The park is believed to be an extinct volcano and the mountain ranges are made up of a mixture of sedimentary rocks with a granite top. Erosion has weathered the granite and rounded granite boulders can be seen in some areas of the park. Estimates put the age of the rock at 300 to 400 million years, well before Australia separated from Gondwana. 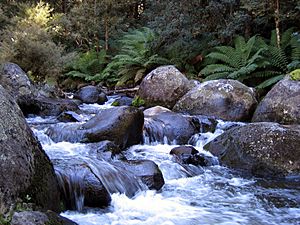 A large variety of plants and animals reside in the park and the steepness of the terrain ensures that they are not disturbed by humans. Plant life includes a large variety of eucalypt trees including Snow Gums, subtropical and temperate rainforest trees like Antarctic beech, tree ferns, a large variety of mosses and ferns and a wide range of edible plants such as the native raspberry, the native cherry and the lilli pilli. 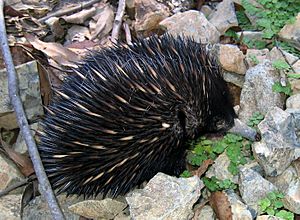 An echidna on a walking trail

The remoteness and inaccessibility of a large part of the park has allowed some of the more sensitive animals to remain largely undisturbed. A large number of fauna have been catalogued in the park including some that were previously thought to be extinct. Some of the more common animals include: barking and sooty owls, eastern grey kangaroos, frogs, pademelons, cockatoos, rosellas, kookaburras, bats and echidnas. It supports a globally important population of rufous scrub-birds, as well as flame robins, pale-yellow robins, paradise riflebirds, green catbirds, regent bowerbirds and Australian logrunners.

Animals such as quolls, native rodents and platypus are reclusive, but may be seen. Not all of the animals in the park are desirable; introduced species such as feral horses and feral cats are being removed.

The traditional owners of the area are Aboriginal Australian peoples, including the Gringai people (southern valleys), the Wonnarua people (western country), and the Worimi and Birpai people (the eastern side).

In 1969 the area between Mount Barrington, Mount Royal and the Gloucester Tops was declared the Barrington Tops National Park. In 1986 it was listed as a World Heritage Area and subsequently a Wilderness Area. Some of the rivers flowing through the Barrington range have been classed as wild rivers meaning they are exceptionally pure and unpolluted. The highest peak is Brumlow Top which rises to a height of 1,586 metres (5,203 ft).

A number of aircraft have crashed in and around the Barrington Tops, Aeroplane Hill being named after one of the crashes. The altitude, frequent fog & cloud, storms and cold weather (causing icing) make this area potentially hazardous to aircraft. One article refers to the "Devil's Triangle". 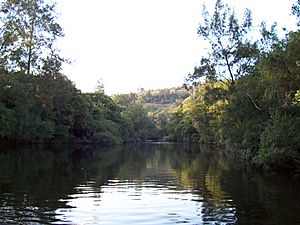 The Barrington Guest House was built from 1925 on the upper Williams River near Barrington Tops by Norman T. McLeod, licensee of the Royal Hotel in Dungog, using timber cut and milled from the property. It stood on land consisting of 10.5 hectares (26 acres) of forest surrounded by National and State Parks and was officially opened in 1930 by Dr Sir Earle Page MHR, then Leader of the Country Party and former Treasurer of Australia and later Prime Minister of Australia.

The guest house was a popular venue for people to stay in the park, until it burned down in a fire at 11pm on 24 September 2006 due to an electrical fault. It was undergoing modernisation under new ownership at the time of the fire. There are plans to rebuild.

Barrington Tops is a popular weekend destination from Sydney and Newcastle. Numerous walking trails and camping grounds are scattered throughout the park. The park also contains well marked and well-maintained gravel roads as well as specific 4WD tracks into less travelled areas. General sightseeing can be accomplished in a non-offroad vehicle. As well as camping facilities, the nearby towns of Gloucester and Dungog have many places to stay. The park is maintained by the NSW National Parks and Wildlife Service and rangers patrol the park daily.

All content from Kiddle encyclopedia articles (including the article images and facts) can be freely used under Attribution-ShareAlike license, unless stated otherwise. Cite this article:
Barrington Tops National Park Facts for Kids. Kiddle Encyclopedia.