The paradise riflebird (Lophorina paradisea) is a passerine bird of the family Paradisaeidae. Formerly a member of the genus Ptiloris, it has since been moved to the genus Lophorina alongside other riflebird species. It is found in subtropical, temperate rainforests in eastern Australia. The species is sexually dimorphic; the male is black with iridescent blue-green patches, while the female is gray-brown and white.

The paradise riflebird is frugivorous and insectivorous. During breeding season, males are promiscuous and perform solitary displays for females, which involves moving rapidly from side to side with the head tilted back, showing off the neck plumage.

The paradise riflebird was initially described as Ptiloris paradiseus by William Swainson in 1825. It was one of the four riflebird species that was part of the now-defunct genus Ptiloris. More recently, after new genetic analysis, these riflebirds have been added to the genus Lophorina alongside the superb birds of paradise. The name Lophorina comes from a combination of the Greek words lophos, meaning “crest” or “tuft”, and rhinos, meaning “nose”. This tuft nose refers to tufts on the noses of superb birds of paradise, which is absent on the riflebirds.

The common name "riflebird" comes from the likeness of their black velvety plumage to the uniform of the British Army Rifle Brigade.

There are currently no known subspecies of the paradise riflebird. It is similar in appearance to the other riflebird species, with males having similar iridescent blue-green patches and females appearing gray-brown with barred-patterned underparts.

The species is sexually dimorphic, with few similarities in plumage between males and females. The adult male is black with an iridescent greenish blue crown, throat, and central tail feathers, as well as iridescent green on the lower breast and flank. The central tail feathers are shortened, giving an appearance of blue over black along the tail. It has been suggested that some of the male's feathers are super black feathers. These feathers have been modified so that their barbules structurally absorb light, unlike normal black feathers, which emphasizes a darker appearance. These specialized feathers are found adjacent to brightly colored patches, suggesting that they help create optical illusions during courtship displays by exaggerating the bright colors they are juxtaposed to.

The adult female is gray-brown, with rufous coloration on the primary and secondary wing feathers, save for a white streak on the supercilium, white throat, and lighter brown with a barred pattern running down the breast, flanks, and belly. Compared to the male, the adult female has a notably longer, more decurved bill.

There has been little record of juvenile appearance. Juveniles of both genders resemble the adult female, with gray-brown feathers.

Like the Victoria's riflebird and the growling riflebird, the paradise riflebird has a growling voice. The male is known for its powerful “yaassss” call, often repeated once at a time and lasting around 2 seconds. 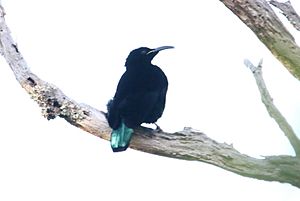 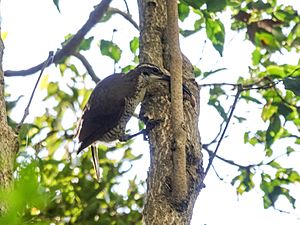 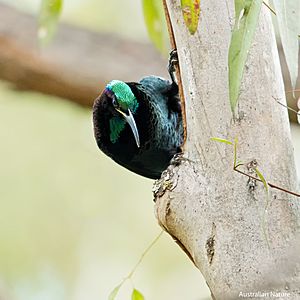 Paradise Riflebird pauses for a brief moment while searching for insects

The paradise riflebird is endemic to eastern Australia, from New South Wales to Queensland, where it inhabits rainforests. It resides in the rainforest canopy, above 500 m (1640 ft) in elevation, though has been known to move to lower elevations, sometimes below 200 m (656 ft), in winter. It is primarily a sedentary species with a low population density. However, it has been known to migrate locally, moving from wet rainforests to nearby sclerophyll forests.

The paradise riflebird mainly feeds on insects and fruit, high in the forest canopy. Occasionally, individuals may form foraging aggregations of 6-7 birds. Normally, however, it is a solitary, dispersed, non-territorial bird.

Breeding occurs from August to February, during the spring to summer months in Australia. Like other birds of paradise, the paradise riflebird is promiscuous and polyginous. The male paradise riflebird performs a solitary display to females from perches of low-hanging, exposed canopy. Although individuals of the species are generally non-territorial, males are presumed to display territorial behavior over these perches during the mating season. The courtship display is composed of rapid side-to-side movements of the wings, which are held horizontally similar to other riflebirds, and head, with a gaping mouth and the iridescent blue-green sheen on the throat exposed. It is also suggested that males have super black feathers which help to create an optical illusion during courtship that emphasizes the iridescent patches they are adjacent to.

Status and relationship to humans

The paradise riflebird has been hunted by humans for its plumage. It is highly vulnerable to deforestation and rainforest fragmentation due to its sedentary lifestyle and low population density, and has lost much of its original habitat. Currently, it is listed as a species of Least Concern, though its numbers are declining.

All content from Kiddle encyclopedia articles (including the article images and facts) can be freely used under Attribution-ShareAlike license, unless stated otherwise. Cite this article:
Paradise riflebird Facts for Kids. Kiddle Encyclopedia.