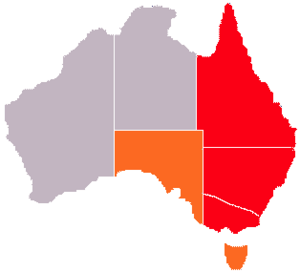 The eastern Australian states. States in red are always defined as eastern. The term can sometimes be applied to the states in orange

The eastern states of Australia are the states adjoining the east continental coastline of Australia. These are the mainland states of Victoria, New South Wales and Queensland, and the island state of Tasmania. The Australian Capital Territory and Jervis Bay Territory, while not states, are also included. On some occasions, the southern state of South Australia is also included in this grouping due to its economic ties with the eastern states.

Regardless of which definition is used, the eastern states include the great majority of the Australian population. They contain the federal capital Canberra and Australia's three largest cities Sydney, Melbourne and Brisbane (all capitals of the respective east coast states), as well as the three largest non-capital cities in the country: Gold Coast, Queensland; Newcastle, New South Wales; and Wollongong, New South Wales. In terms of climate, the area is dominated by a humid subtropical zone, with some tropical (Queensland) and oceanic climate (Australian Capital Territory, Victoria, New South Wales) zones. In most situations, the eastern states are defined as those who use Australian Eastern Standard Time (AEST), and that is the definition that this article will adhere to, unless noted.

Divisions between the east and west

Since the 1980s, governments have proposed building a High-speed rail in Australia. However, this rail would only go through the eastern states of Victoria, New South Wales and Queensland. Adelaide has often been included in the proposal, however former Greens leader Bob Brown said that a rail connecting Perth was inevitable.

Politicians and newspapers from Western Australia frequently use the term(s) to emphasise the "them and us" attitude with respect to the state's isolation from the rest of the country. For example, in 2016 WAtoday ran an article with the headline "Ten reasons why Perth trumps the East Coast of Australia".

The combined population of Queensland, New South Wales, Australian Capital Territory, Victoria and Tasmania is 19,484,100, or 81% of Australia's population.

Greater Capital City Statistical Area (GCCSA) or Significant Urban Areas (SUA), with a population of over 30,000, from north to south:

All content from Kiddle encyclopedia articles (including the article images and facts) can be freely used under Attribution-ShareAlike license, unless stated otherwise. Cite this article:
Eastern states of Australia Facts for Kids. Kiddle Encyclopedia.